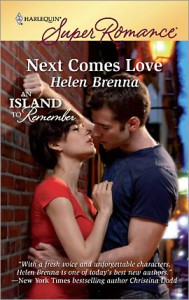 I will confess that I don’t often venture into the Harlequin Superromance line. The covers are littered with babies and well, those tiny faces frighten me. This book, thankfully, was baby less although a child did play a fairly important role in the story. I think what surprised me most was that this was a very nice, short romantic suspense.

Erica Corelli is a chef in a Chicago restaurant who receives a disturbing message from her sister to take Jason, her sister’s six year old boy to some place safe. Erica drops everything and heads north to Mirabelle Island. Mirabelle is the site of the best three days of Erica’s childhood and she thinks that this will be a safe place to hide out with her nephew. Erica and Jason pretend to be mother and son until Erica can find out what is going. She suspects that her brother-in-law, Billy Samson, is abusing his family and this is the reason for her sister’s frantic voice mail message.

Erica recognizes she’ll likely lose her job, leaving without notice, and she’s used up about the last of her personal resources in getting to Mirabelle Island without leaving a trace behind. She manages to obtain a job as a waitress at a Mirabelle restauarant/bar as well as quarters for her and Jason above the bar. She’s hopeful that this move is only temporary and that in a week she’ll be back in the southside of Chicago where she belongs.

Garrett Taylor is the new Mirabelle Chief of Police. He left Chicago after an incident which took him over the line of legal. He suspects that his past experience as an abused child and his easy morality when it comes to executing his official duties would make him a bad husband and even worse father. He has come to Mirabelle with the idea that here in this tiny hamlet, one that is physically untethered to the rest of the country, he can redefine himself. Garrett is troubled by his attraction to Erica, clearly a bad girl who has more secrets than is good. As Erica perceptively points out “You think if you stay here long enough," she whispered, "this place, these people will clean you off. Don’t you? All I do is remind you that it’s not going to be that easy.”

The story is propelled by both the suspense plot as Jason’s disappearance starts to hit the airwaves and more people become aware that Erica and Jason aren’t who they present themselves to be and the romance plot as Garrett struggles with acceptance of his brutal past and Erica learns to trust someone other than herself.

The town of Mirabelle plays an important role in this story because they enfold Erica and Jason in their embrace as the days become weeks and they await word from Jason’s mother. But word never comes. Instead, the specter of Billy finding them grows stronger. While they wait, though, Erica helps redo the bar menu and update the look of the bar to make it more appealing to tourists. It’s kind of heartbreaking to read about Erica making out recipe cards for her new dishes so she doesn’t leave Lynn, the restaurant owner, in a spot. Erica never once thinks about staying while everyone around her is making plans to have her be a permanent part of Mirabelle.

I was surprised at the sensitivity of these characters and the well done suspense. B

in ebook format from Sony or other etailers.