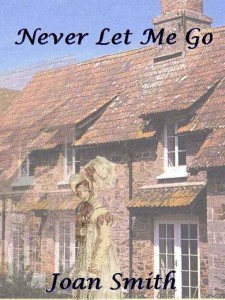 Your regencies novels have been among my favorites for years. I’d heard conflicting things about your contemporary mysteries but decided to take the plunge and try one that seemed, from the blurb, to also include some regency stuff.

Belle Savage, American romance writer, rents a cottage in England for inspiration. And she finds her Regency hero. Only he’s a ghost, who entangles her in the past, where Arabella Comstock’s tragic story pours from Belle’s pen. When the Lord Raventhorpe of Regency days finally learns the truth, will the contemporary lord also find his destiny?

I’m going to attempt to avoid spoilers but honestly I think my chances of doing this are piss poor.

There are two sides to the book – the modern part wherein Belle goes to England, settles into her cottage, learns about the tragic past of Alexander and Arabella and decides to write about this. And the part during which Belle seems to be possessed by Arabella who tells her story through Belle’s writing. It has a very gothic feel – especially towards end when All is Revealed and Belle tries to join Alexander.

I liked the modern part of the story better. Alexander’s sly humor and his feeling about women in pants, modern dancing – more like headless chickens than dancing – TVs, etc were wonderful. I could stand to have Alexander whispering sweet nothings in my ears and can fully understand how Arabella would fall hook, line and sinker for him. He is a charmer and you make us see and understand his charm instead of just telling us how fantastic he is.

After reading about his bad poetry written after he left England, I felt sorry for him since it seemed to be the work of an angry, hurt man. After learning what really happened, I felt even worse for him. So, when he, in a way, finally got his happy ending, it was doubly sweet. I hope Alexander is now going to be known to history by the name Raventhorpe instead of Vanejul as I hated that moniker.

Arabella will appear to many as impulsive, childish, spoilt and undeserving of her ultimate happiness. Well, at times she was. I had to keep reminding myself that she was only a young teenager when she and Alexander fell in love which is the age of uncertainty and trying out her flirting wings. Plus as Alexander coolly points out, many young women of that age were married at 15-16, as was Arabella’s own mother. In the end, she did have to earn her HEA and rose to the occasion when she had to make the choice for true love.

However, as much as Arabella improves at the end, the middle part – where Belle is writing Arabella’s story without interruption – gets a bit…slow?, less interesting? The charm of having Alexander hanging around is lost. As for the modern Lord Raventhorpe, he has moments of comas and then suddenly he’s walking around only with a cane? Sorry but to me the health care aspects of this are silly. I know it’s supposed to explain Alexander’s ghost coming and going to Belle but…I guess it just has to be accepted like many aspects of the plot.

It’s hard to judge much of the book as a romance since there really isn’t a focus on having a hero for Belle. We see Alexander as still pining for Arabella, which he is, instead of for any relationship with Belle. So, for anyone looking to watch these two overcome obstacles and fall in love, it doesn’t seem to happen for much of the book. We only learn at the very end, that they have indeed been (re)falling in love. So much of my feeling while reading the majority of the story is that Belle won’t have any love interest or that she might find him and then have to wait.

Indeed, I was all set for a bittersweet ending when it changed. And I’m not sure about this. On the surface, it’s very sudden for a HEA but I guess we’re supposed to already know the modern Raventhorpe since he’s the reincarnated Alexander and have accepted that he and Belle already love each other. A reader’s feelings for the book will definitely hinge on the willingness to accept ghosts and reincarnation as possibilities or at least to accept them for the duration of the book.

In the end, I’m not sure I’m convinced that Belle and the modern Raventhorpe are in love but then, was I supposed to be? Theirs is more a HFN with strong intimation that through them, Alexander and Arabella will find their long awaited happiness in each other. Which sounds kind of creepy when I write it. I do hope, though, that Sir Giles didn’t live long to enjoy his ill gotten gains. B-