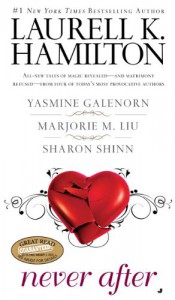 Okay. So before I begin reviewing the anthology NEVER AFTER I have two warnings. #1: YE OLDE SPOILERS AHOY. Seriously. I am incapable of talking about stories without-talking about stories. #2: This will be disjointed as hell. There are plenty of reviewers who are capable of smooth, cohesive, intelligent reviews. I am not one of them.

First off, I have a bone to pick with marketing. This anthology (featuring stories by Laurell K. Hamilton, Yasmine Galenorn, Marjorie M. Liu, and Sharon Shinn) is clearly marked on the spine as Urban Fantasy. And yet? Only one out of the four stories has an actual urban fantasy setting. All of the others are traditional fantasies. I mean like trolls, ogres, elves, and magician-type fantasies. MISLEADING.

The tagline on the cover reveals the common thread of all the stories: “All-new tales of magic revealed-‘and matrimony refused-‘from four of today’s most provocative authors”. Okay, so all the stories feature heroines who are trying to get out of unwanted betrothals. And yet this whole “four of today’s most provocative authors” thing? What do they mean by that? Are they implying these stories are super smexy and feature kink? Because they don’t. In fact, these stories would pretty much be comfortable on the shelf with inspirational romances. Barely any smooching to be found. So what’s so provocative about that? Honestly, out of these 4 authors, only Laurell K. Hamilton probably fits the provocative label, and only then if you mean “writes crazily complicated orgies in her other books”.

1. Can He Bake a Cherry Pie by Laurell K Hamilton

Anyway, on to the actual story critiques. Laurell K. Hamilton leads off the anthology with “Can He Bake a Cherry Pie?”

This story is c-c-crazy. At it’s core, it is a pretty basic fairy tale featuring a heroine who wants to escape an unwanted betrothal. In order to do so, she announces that she is going to rescue Prince True -‘ a sort of male Sleeping Beauty figure in their kingdom. True was captured by a sorceress 50-odd years ago after being a douche.

Actually, he basically announced that men were waaay more important than women and that women’s work was useless in comparison. That’s it? Why aren’t 75% of the men prisoners in her lair, then? So anyway, the sorceress, in a fit of girl power, challenged him, won, and has kept him prisoner in her lair, forever beautiful and ageless. According to legend only a girl well versed in the womanly arts can free him. All righty then.

So our guileless (and virtually brainless) heroine makes her way to the cave of the sorceress, fully anticipating her own death. But dying in the act of rescue is so much better than marrying an oaf. So whatevs. Heroine makes her way to the rope and board bridge stretching over the chasm leading the cave and is greeted by a rabid troll. She basically squeaks and closes her eyes waiting for the death blow, and BECAUSE SHE IS TOTALLY WEAK AND DOES NOT FIGHT BACK OR EVEN MAKE EYE CONTACT, she passes the first test.

The second test finds her facing an Ogre just inside the mouth of the cave. Said ogre threatens to chop her up into pieces and eat her and heroine agains squeaks in distress and closes her eyes. Because ew. Then the ogre NOTICES HER SHOES. Which are impractical party shoes. Because the heroine left in a hurry, yo. And she likes sparkly things? So the beauty and impracticality of her shoes lets her pass the second test.

The third test is the most bunk-ass sphinx you would ever hope to meet. This sphinx doesn’t even ask questions in the form of obscure riddles. WTF? This sphinx is interested in fabric dying techniques, dessert recipes, and gardening. The heroine’s housekeeping skills enable her to pass. Good thing, too, as she would have been eaten alive.

Ultimately, at the end of this gantlet, the sorceress is met, challenges are posed, and the asstacular Prince True is found. After a bit more craziness, involving -‘ you guessed it -‘ baking cherry pies, the heroine lives happily ever after.

I just. I mean. What is the message in this story? I know what the message is supposed to be. I.E. Womanly skills (aka cooking, gardening, and housekeeping) are important and have meaning -‘ but that is really not what the story shows. The heroine is supremely stupid and wins the day by being cowardly, impractical, and good at trivia. GIRL POWER!

As an added bonus, this story is a mere 35 pages. I think the true miracle here is that I kept reading the anthology after I finished this story. I give this a D-.

2.   The Shadow of Mist by Yasmine Galenorn

Next up is Yasmine Galenorn’s “The Shadow of Mist”. First off, kudos for being the lone urban fantasy story in this “urban fantasy anthology”. This novella is set in her “Otherworld” universe, and I have to be honest, I haven’t read any of the other books in the series. To be perfectly frank, plot-wise, this wasn’t a great introduction to it.

Siobhan, the heroine, is a selkie who has been on the run from her fiance for over 100 years. The last few decades, she’s relaxed her guard somewhat, and has found happiness and love in the Pacific Northwest with her boyfriend Mitch. The story opens with her long lost fiance Terry calling her on the phone to helpfully inform her that he knows where she is and is coming for her. Why? Because he will not be denied, yo! This is the equivalent of villain monologueing -‘ he has no earthly reason to warn her of his arrival, and without his helpful information she would have been a sitting duck for his kidnapping attempt. Of course, that would have completely eliminated the plot as well.

IMO, this is a lazy plot device that serves no other purpose than to allow the heroine to call in ye olde cast of characters from many previous novels to assist her in her fight against the villain. To her credit, I must say that Galenorn does a great job with said characters. The problem is, I was more intrigued with them than I was with the heroine of the story, who was totally weak and wimpy in comparison. In fact, the heroine spends the entire story having events happen to her, rather than trying to become the master of her fate.

She refuses police assistance because she’s pretty sure her family will still force her to marry Terry. Even though she’s pregnant with Mitch’s baby and knows Terry will totally force her to miscarry if he catches her on her own. Oookay. She is repeatedly almost dragged off with Terry and his henchmen, and is repeatedly rescued by characters from previous books. And then? In the big showdown? (Which is totally not big at all and really sort of anticlimactic.) Siobhan saves the day by complete and total accident. It’s honestly the equivalent of someone tossing something out a high rise window and killing a wanted criminal who just happens to be walking by below.

For all my complaints, I will say that Galenorn succeeded in making me interested in her world and the characters that occupy it. I will most likely be picking up the first book in her Otherworld series, and hoping the plotting goes better in a full length novel. My grade for this story is a C-.

The third story in this anthology is Marjorie M. Liu’s “The Tangleroot Palace“. This was an ethereal, dreamy story with a strong fairy tale feel to it. It was also my favorite of the bunch. Sally, our intrepid heroine, is a princess who is being forced to wed a Warlord from a neighboring kingdom. Their mothers were childhood friends, and though they ended up in different countries, it was their dream that their children would meet and marry someday. But Sally ain’t havin’ it. Even though her father’s kingdom is being tormented on all sides by mercenaries and squabbling lords, Sally wants the right to choose her own destiny. This leads her to the stories titular location -‘ the Tangleroot Forest.

A place of magic and legend, the forest draws people in, but rarely lets them out. On her journey to the forest, Sally meets a traveling circus trio whose members are more than meets the eye.

As I mentioned, this was my favorite of all the stories, and although the identity of the hero was easily guessed -‘ heck, I wouldn’t even call it a guess, it was blatantly obvious -‘ that wasn’t the true point of the story. The secret at the heart of Tanglewood is the true mystery to be solved here. My grade is a A-.

4.   The Wrong Bridegroom by Sharon Shinn

Lastly, was the most lengthy of the stories, “The Wrong Bridegroom” by Sharon Shinn. I really wanted to love this story from the get-go. I love 90% of Sharon Shinn’s books, and while I ultimately ended up really liking this story, I found that I had to power through a big chunk of it to get to that point.

Told from the 1st person POV of the heroine, Princess Olivia, the story starts out with a royal challenge to find the person worthy of receiving her hand in marriage. Although there has long been an understanding between her and the oh so perfectly stuffy Sir Harwin Brenley, Olivia would rather die than marry that hugemongous boor. Because she is spoiled and stubborn and young and foolish and petty. And young. Young. YOUNG. So the King, a ruthless and selfish man, has arranged a series of challenges to find the Princess a husband.

I guess it is to Shinn’s credit that she writes the heroine so well. She perfectly encapsulates the spoiled attitude of a 21 year old princess with a horrible, neglectful father, a surprisingly wise stepmother she refuses to listen to, and a lifetime of getting her own way. And because she so perfectly captures her character, I spent 75% of the story wanting to kill Olivia. Or at least bitchslap her.

After a tie occurs between two competitors for her hand, Olivia makes the tie-breaking decision and immediately sets out on a trip with her new betrothed to visit his family. As they journey along at a snail’s pace, in a not-very-princess-like horse and cart, they add unexpected members to their party along the way and start to see people, places, and things that the sheltered Olivia has never experienced before. Not much time passes before Olivia begins questioning what makes a good husband, a good ruler, and a happy life.

Although this heroine was grating and immature (which I think may have been exacerbated by the 1st person narration), when it got good, it got reeeeal good. In fact, it made me miss my stop in the morning, necessitating a 5 block hike to work. For that reason, I have to give this story a solid B+.

So overall, though this anthology was seriously mislabeled, the bulk of the book was entertaining. The Liu story and the Shinn story comprise over 2/3ds of the length, thanks to the super short Hamilton tale. If you are a fan of romantic fantasy with a fairy tale feel, you’ll enjoy this. Weighing the letter grade in terms of story length, I would give this a B-.