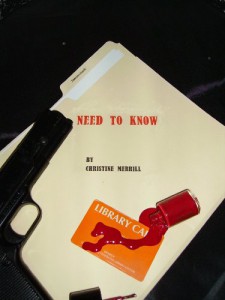 Someone sent me an email pointing me to this blog post by Lani Diane Rich wherein she lamented that there was a great book out there that no one was reading.   I was intrigued. I knew you wrote historicals for Harlequin but I admit to never having read you.

While I don’t know if this is the best book that no one was reading, I did enjoy it.   I don’t read many thrillers so my assessment of what makes a great thriller is probably very different from someone steeped in that genre. Having said that I found this book to be fast paced and interesting enough to make me wonder if there will be a book 2.

Liz Monahan is in New York with her newest boyfriend, Doug. He’s been acting very strange and she wonders if he is married. After all, he’s booked her a room in the same hotel where he is staying and won’t let her go to his room. She’s been snooping through his things, like his wallet and his pants pockets (the latter might have been an accident) to see if he is secretly married.   She seems to have the unfortunate tendency to end up with married men.

After being kissed six ways from Sunday by Doug in the elevator, Liz is sent off on her way to seek her own room as Doug answers an emergency phone call, or so he says. When she arrives at her room, she sees a man with a roll of duct tape and a corpse on the ground. Before she can scream for help, the man with the duct tape grabs her and presses her face down on the bed. Liz is able to get away and she runs to the lobby but by the time the management can respond to her, the room is spotless with no sign of the dead guy or any foul play.

Even her boyfriend, Doug, thinks that she’s made up her story. This is the last straw for Liz and she returns home to Chicago sans Doug.

Harper is the man with the duct tape. He works for some secret government agency and his partner, Max, is the one that created the corpse. Max is a known wild card and Harper was matched with Max to keep him in check. Only it doesn’t work and Harper is left with a corpse, a witness, an unaccounted for amount of money in his account, and an unhappy fiance.

Harper has to convince Liz that he’s not a killer and that she should help him. Along the way, Liz shows a surprising capacity for observation, quick decision making, and common sense.

Liz’s personal life is a mess and she works as a research librarian at a major tech company. Her ability to learn and retain information is what helps keep her alive. She finds herself attracted to unsuitable men and this really is never explained. At one point she wonders why she always ends up dating married men, but there is no real explanation for this, nor does she seem actively interested in ascertaining why she makes the decisions she does in regards to men.   Instead, she wonders why she attracts the wrong kind of guy.

Harper’s very tired of the secret agent life or so he keeps telling himself and Liz. He wants this to be his last mission, his last case. But Liz thinks he really is addicted to the thrill. She notes that he is a man that runs toward danger and not away from it.

I felt like both Liz and Harper were very interesting characters but their story arcs weren’t taken far enough. Liz’s bad decision making in men is more of a gimmick that excuses her decision to be with Doug rather than utilized to make her a more three dimensional character. I felt more connected with Harper, but even his character arc seemed stunted. In some sense I felt that the beginning of character growth showed up at the end of the story which is more common with extended series books of which this could definitely be.

I found myself confused at times in the beginning but once both Liz and Harper are in Chicago, the story really took off and I was engrossed. Most all of the story seemed plausible which is an important aspect for a thriller. I would like to read another Harper/Liz story if you ever decide to write another.   This is a self published book but other than some formatting issues, the end product is indistinguishable from one that comes from a traditional publishing house.

For readers who like a fast paced action story with a decent hint of romance, I don’t think this would disappoint. B-

This book can be purchased at Amazon in Kindle format or at Lulu.com.