Review: My True Love Gave to Me 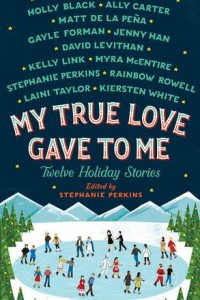 In my experience, romantic holiday anthologies have good odds of being meh, but this collection of contemporary and fantasy stories included enough great names in Young Adult literature to be worth a try. Technically, it could be considered New Adult, since several of the characters are in college, but most of the conflicts seem to belong more to YA; the stress caused by missing and/or emotionally unavailable parents is the biggest recurring theme. It’s a decently diverse batch of stories, with almost half of the relationships including a person of color, and one gay couple. If you examine the cover carefully you can identify many of the couples in the book, charmingly depicted.

“Midnights” by Rainbow Rowell. This managed to punch me in the gut and then make it all better again in just 15 pages. The story describes four New Year’s Eve countdowns: Mags first met Noel during the first one, had to endure watching him kissing other girls during the next two, and finally gave up on him for the fourth. It’s a sweet friends-to-lovers story that really captures that exquisite first love pain.

“The Lady and the Fox” by Kelly Link. I thought that Link was a new author to me, but I’d forgotten I read her mysterious, compelling story “Magic for Beginners.” This is a much less complex tale, with obvious roots in the “Tam Lin” legend. It also brought to mind books like Ngaio Marsh’s Surfeit of Lampreys — stories in which a lonely outsider is sucked into the world of a charming, exciting, but not entirely reliable family. It’s somewhat melancholy in tone, but the creativity and persistence of the heroine, Miranda, is ultimately triumphant.

“Angels in the Snow” by Matt de la Peña. Freshman Shy Espinoza, the first member of his family to go to college, is having a lonely, hungry Christmas vacation until he meets his pretty neighbor Haley. Underlying a simple, tentative romance is a thoughtful exploration of how it feels to navigate a new world, as Shy struggles to believe that he’s entitled to belong.

“Polaris is Where You’ll Find Me” by Jenny Han. A bittersweet mixture of whimsy and teenaged angst, telling the story of Santa’s adopted human daughter Natalie, who’s hopelessly in love with an elf. I thought it was a little short for what it tried to accomplish, and the ending isn’t very satisfying.

“It’s a Yuletide Miracle, Charlie Brown” by Stephanie Perkins. I may have been the last person in Romancelandia who hasn’t read Perkins; this didn’t compel me to rush out and read her other books, but it’s interesting. It’s an interracial romance between a Chinese-American girl and an Anglo boy, who sells her a Christmas tree she really didn’t need and has no room for. He inadvertently becomes involved in her complicated life, and they bond over the course of an odd evening. I liked the contemporary feeling of it: Marigold is an animator with a youtube channel, and her initial interest in North was for his charismatic voice.

“Your Temporary Santa” by David Levithan. It’s nice to see a gay couple matter-of-factly included in a YA anthology, though it’d be even nicer to see more stories and some other authors. Levithan is good, but it seems like he’s become THE voice of queer YA. This is more of a vignette than a full story, a mournful little adventure in which an unnamed narrator poses as Santa — including sneaking into the house at night — to help his boyfriend’s little sister continue to believe. Although none of his fears of being shot for trespassing come about, he inadvertently steps into a lot of painful family drama.

“Krampuslauf” by Holly Black. Here’s an offbeat holiday: a night for dispensing rough justice to wrongdoers. The story is thematically similar to “Angels in the Snow,” — a poor girl has aspirations for a different life — but with a fantasy twist. I preferred the subtlety of the previous story, but liked the sharp first person narrative.

“What the Hell Have You Done, Sophie Roth?” by Gayle Forman. New Yorker Sophie begins freshman year at “the University of Bumfuckville,” where everyone says she’s “so big city” and no one gets it when she’s being sarcastic. (I have lived almost this exact situation, and the depiction is spot on.) Life looks up when she meets Russell, who not only gets her jokes, but helps her find a way to celebrate Hanukkah even in the land of Ned Flanders. Like “Yuletide Miracle,” this is an interracial romance — Sophie is white, Russell is black — and all the action takes place in one night. I really enjoyed the humor, and the ultimate spirit of optimism.

“Beer Buckets and Baby Jesus” by Myra McEntire. “Put this on your list of things to know: the combination of tinsel, baby angel wings, and manger hay burns like weed at a Miley Cyrus concert.” Prankster Vaughn discovered this after he inadvertently burned down the church, and now he’s stuck helping out with the annual Christmas pageant as part of his community service. Which puts him near minister’s daughter Gracie: captain of the safety patrol, valedictorian, and the girl who always has an extra pencil. “Girls like that and guys like me don’t mix. Except when there’s a pending court order.”

This is perhaps the funniest story in the collection, but also has a sweet side. The humor helps balance out a somewhat message-y feel, as Vaughn discovers he’s been making a lot of false assumptions about people whose lives are different than his.

“Welcome to Christmas, CA” by Kiersten White. Maria can’t wait to get away from Christmas, California, a place so small it’s not even a town but a “census-designated place.” She won’t miss her distant mother and her mom’s penny-pinching boyfriend Rick, either. But when a cute new chef starts cooking everyone their heart’s desire and making Christmas a happy place, Maria discovers that she’s been wrong about just about everything. There’s a very dark edge to this story, but it works out happily, if not entirely plausibly.

“Star of Bethlehem” by Ally Carter.  A lonely runaway girl impulsively changes flights with someone else and finds herself in the midst of a warm family Christmas on a farm. This was my least favorite of the stories; it’s pleasant enough, but the plot is familiar and the tone very sentimental.

“The Girl Who Woke the Dreamer” by Laini Taylor. This is the only story not set in our time. The names seem to be Irish; the time isn’t specified, other than that Christianity has become the prevailing religion… but just barely. Neve, a girl with nothing to look forward to other than marriage to a cruel man or slowly wasting away, calls for help in the forbidden old language and awakens something wonderful.

There are some beautiful moments here. This is how Neve reads the thoughts of the man who lusts after her: “I will have you, and I will hold you. I will learn a thousand ways to make you weep. Your tears will be the sugar in my tea, you misery my delight.” The being she awakens calls this to her: “I will free you and I will lift you. I will learn a thousand ways to make you laugh. Your smiles will be the honey in my mead, your enchantment my delight.” But the conflict is quickly dissipated, leaving only a fairy tale ending of utter passivity for Neve. After the real world concerns of the other stories, this one felt out of place and ultimately unrelatable.

I enjoyed this collection very much overall, although it really started to drag towards the end. Twelve stories to go with the twelve days of Christmas is a cute concept, but it starts to seem too much when so many of the same themes recur. (Then again, Taylor’s story is very different and it still didn’t do a lot for me, so perhaps I just got punchy.) Still, if you want some holiday reading that’s romantic, fun, and thoughtful, or a good gift for a teen (I’d say around 14 or up), I’d recommend it. B