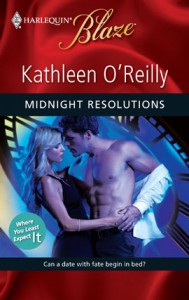 I realized when I started reading Midnight Resolutions that I have grown somewhat complacent with my expectations regarding your books. I was prepared for the very independent heroine, and the lust-struck good guy hero, and the witty banter between them. What I wasn't expecting, and what I found both compelling and problematic about Midnight Resolutions, was the depth of the heroine's darkness and its impact on the romantic development.

Ian Cumberland is a former Wall Street whiz who now uses his problem-solving acumen to find jobs for other New Yorkers displaced by the economic restriction. He misses his previous fat cat lifestyle, but is proud of his ingenious frugality and his ability to place even the most difficult job candidate. And when he encounters a stranger in Times Square on New Year's Eve, he believes that his luck is back, and it's being hand delivered by an earth-bound angel.

Rose Hildebrande cannot believe that she let that handsome stranger kiss her at midnight in Times Square. Of course he did help her find her phone in the midst of that crowd, but still, she has a doctor to woo and a life of luxury to pursue. She has worked extremely hard, planned everything out, and kept an incredible focus in order to position herself just right for everything she wants. She may not have had control or safety as a child, but she can create those for herself now, because she has control over her own life now, and she will do what she has to do to create adequate safety and security for herself.

Which is why Rose can hardly recognize the woman who responds to Ian Cumberland's Missed Connections ad on Craigslist, accepting a date with the handsome, unplanned stranger.

In some ways, Midnight Resolutions reminded me of Shaken and Stirred in the way both heroines adamantly resist emotional entanglement and romantic commitment with the hero. But Rose is much more troubled than Tess, her history much darker and more traumatized. While on the surface she appears to be somewhat of a clichéd gold digger, her ambitions are intimately connected to what she suffered as a child, the truth of which is slowly revealed during the course of the novel.

Ian certainly doesn't expect the complexity Rose presents, although his intelligence and sensitivity makes him a quick, if not fully informed, student. He senses Rose's wariness but cannot discern the cause, in large part because she has perfected the role of the young, well-bred debutante in complete control of her life, when the reality is anything but. So Ian does not expect it when Rose sleeps with him and then leaves a note in lipstick on his bathroom mirror asking him not to call her. Nor does he understand it when she shows up at his apartment days later, for a booty call:

"Why can't we do this?" she asked, not getting the whole rejection thing.

At the word, sex, Ian could only stare, slack-jawed, engines starting to fire. Obviously forgetting that last crash landing. "You're fucking kidding me," he said, mainly to himself.

"No. There are things I won't give up. I assumed you wanted something more than sex, and that was arrogant and conceited and unfair."

Now she'd done it. He stopped worrying about the door and collapsed on his couch. "So you're willing to fuck me?"

"Yes." Nervously she remained a statue, not moving.

He didn't like the look on her face. Fear and vulnerability, as though she was putting herself on the line. Ian scrubbed his eyes, wiping it away. "Why?"

"Because I want you. And I like the sex."

What might be such a simple thing for other women was fraught with danger for Rose, because Ian was out of her comfort zone in almost every way. She had given him her virginity, something she had stubbornly held on to as one more symbol of her self-control. She had violated her own promise never to see him again so that she could focus on the handsome and handsomely loaded doctor. As personal assistant to a countess, she was mere steps away from everything she had dreamed. The secrets of her childhood have kept her focused on her goals for a long time, but Ian is definitely an unexpected temptation.

And Ian is desperate to figure Rose out. She gives him bits and pieces of her childhood – some truths, some falsehoods – and he can read that there's much more to understand. He knows she likes to be on top during sex, but doesn't understand why she becomes stiff and blank beneath him. He knows she doesn't want a traditional relationship, but he cannot fathom why she would tell him about her upcoming date with another man in the middle of seducing him. She wounds him regularly, but he just can't quit her and her wounded eyes and alluring Honeysuckle scent.

I don't want to give too much away here, but I will say that I found Midnight Resolutions to be a brave book in some ways. I suspect many readers will dislike Rose, because she feels more comfortable in the guise of a shallow society insider than in her own skin. She's not always likeable, and she wounds nice guy Ian more than once. Ian, on the other hand, is the more nurturing and care-taking one. He begins to realize that he likes his "post-layoff" life and job, and the ambition he always had seems to have found another outlet. He's the one who wants the committed relationship. It's an interesting role reversal and one with mixed results for me.

What worked well for me is the way Rose is unapologetic for her ambitions and very aware of the power of her sexuality. She studies and employs Sun Tzu's Art of War like it's an etiquette guide. I understood why she felt the need to exercise so much control and why she was comfortable with things others might view as purely mercenary. Ian I understood a little less. He thought Rose was his fate, but for much of the novel, he was always a few steps away from seeming the sucker. That he understood this about himself did not, ironically, make it better for me, except in so far as I believed his persistent desire to solve a problem accounted for some of his motivation regarding Rose. But that isn't the same thing as love, and despite the powerful pull of lust, I did wonder more than once how his faith in everything soft underneath Rose's brittle-beautiful exterior would be validated.

Words came to her tongue, words she'd never spoken in her life. I love you. I'll stay with you, whatever you choose. Whatever you do. Don't leave me. Please.

His eyes flickered. That same defensive vulnerability that had affected her before. The defiant bravado that shouted: "Go ahead. Get it over with so that I can move on with my life."

But he didn't think she could move on, and something small and fragile within her, died.

"I haven't changed," she told him, because she hadn't. She hadn't changed a damned thing.

"Why, Rose? You're not greedy, you'd never have a maid, and you'd never let anyone else touch your laundry. This isn't who you are."

"No. But money can buy anything. It's power. Control. The dreams go away, because you have it all. When you live up there in the penthouse, no one can touch you. You're invulnerable to the rest of the world."

"Only if you're made of stone, Rose."

In the end, it's plotting that brings Rose and Ian to where they need to be with each other, and that plotting is a little too contrived for me to be as poignant as I felt the set up promised. It's a difficult balance, making a character damaged enough to refuse love but capable enough of changing to facilitate a happy ending for the couple. And despite my admiration for the risk here, I found the last section of the novel rushed and not fully convincing. Further, there was a secondary romance between Ian's two best college friends that I think was intended to demonstrate Ian's attraction to difficult and complex people, but that was itself difficult and complex enough to require more page time than it got. Consequently, I felt alternately frustrated and distracted that I was not getting much more or way less of Beckett and Phoebe's rocky friends to lovers story.

Still, though, I liked the turn to a more serious book (I loved how Sex Straight Up dealt with 9/11, for example), and appreciated the riskier choices for both hero and heroine. And I hope we get a glimpse of these two in a later book. B-

(affiliate link) or other etailers.