REVIEW: Memoirs of a Hoyden by Joan Smith 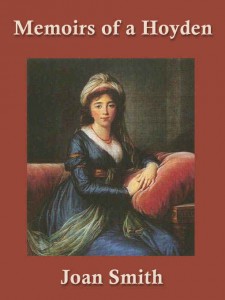 Your comedic trad Regencies are always a delight for me. There are some that have had me cackling with glee as I read them since I love it when an author can turn the standard Regency conventions upside down – or at least twist ’em a little.

Miss Marion Mathieson takes no prisoners and doesn’t suffer fools gladly. She followed her English Army father across the Peninsula then after he died and she got shipped off to boring relatives, she got a secretary, Ronald Kidd, and took off for parts more interesting which she detailed in a book. Her daydreams are for the three romance novels she’s penned under another name. So when she and Ronald are traveling via coach to a speaking engagement and it gets held up, she’s eager to see what happens so she can add it to her next manuscript.

To her utter disgust, she displays more gumption then any of the men with her including one Corinthian who is merely either bored or more bored throughout the whole event. But something about it strikes her as odd and she eventually bullies Lord Kestrel out of his boredom to set off after the men she thinks are Frenchie spies.

But are there really spies and if so, where are they? And for a woman who is past thirty and has made no bones about her lack of interest in marriage, Marion is startled to find her interest caught by Kestrel. Even if she does want to brain him half the time.

The plot machinations and time that Marion expends convinced that she knows exactly what’s going on are enough to make my head hurt. At times I can see why Kestrel wants to return the favor of clobbering her over the head. But no one can say Marion isn’t ready and willing to hold up her end of the events which unfold. To his credit, I think Kestrel is going into their marriage with his eyes wide open and fully ready to battle his way out of whatever Marion might get them into.

The whole spy stuff plot is nothing new. The reason to read the book is for the sparks which fly whenever Marion and Kestrel are in a room. The fact that they keep from killing each other on their way to saving England is a wonder. The secondary fact that I buy into the fact that they go from despising each other and fighting with each other to kisses that seem as if they’ll cause these two to explode with passion and all in the course of 3 days says something for your writing skills.

“Memoirs of a Hoyden” is another oldie but goodie that I’m glad that “Regency House” has reissued it. B