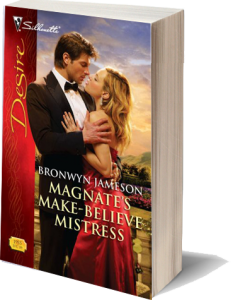 Sarah from SmartBitches either tweeted or emailed me that she was reading some awesome book. I am always interested in awesome books so I emailed her and asked her for the name of said book. Bronwyn Jameson came the response and so off I went to Harlequin. I emailed her back and you can read my response at the end of the review.

Christiano Veron loved his ponies and his family. When his sister’s fiancee, Hugh, tells Cristo that another woman from Australia is claiming to be pregnant with Hugh’s baby, Cristo agrees to meet with this other woman. (Oh noes! a Secret Baby!) Surprisingly, though, Cristo will not suppress the truth from his sister.

“I will find her,” Cristo corrected in a lethally low voice. “And I will discover the truth behind her allegation before I walk my sister down the aisle. If it turns out you are lying, there will be no payout, no hiding the truth and no wedding.”

This was my first clue that this story might not be as I expected. In fact, the biggest compliment for this book is that when I thought the book would take a right turn, it always took the left turn. There are no real villains in this story and every time I tried to peg someone as the villain, I was wrong. When I tried to match up various characters in the book, I ended up being wrong. When I thought that Cristo’s mom was going to hate Isabelle because Vivi has plans for Cristo that don’t include some girl from Australia, I was wrong. Vivi doesn’t look down on the housekeeper, Isabelle; instead they become instant bosom buddies. One of my favorite lines in the book is when Cristos describes his mother, who has been married five times, as “Vivi is half Italian, half English. All crazy.”

Cristo goes to Australia to find Isabelle Browne and determine what the truth is. He has no intention of crushing her, but he also has little respect for her believing she is likely no more than a gold digger. Isabelle is a private housekeeper who hires out to the wealthy clients. She is often solicited by name as she has a great reputation in certain circles for being the perfect temporary housekeeper; and thus, Cristo’s Veron’s request for her services is perfectly reasonable. But Isabelle wonders if Cristos is related to Hugh Harrington and whether he is in Australia to fix things by paying Isabelle off.

It’s not obvious, at first, that this story is inspired by the Cinderella fairy tale, but it becomes increasingly clear as the reader moves into the book. Clearly the elements are updated but we have one handsome prince, difficult siblings, a housekeper, a special gown scene, a ball scene, and a left behind shoe but it is all intricately tied into the story.

Cristos walked a tight line between being an alpha male and an asshole male, but I never thought he stepped over. He was strong and protective but he wasn’t out to ruin anyone’s life. He used his power and influence, though, to get what he wanted. Isabelle was wonderful. She wasn’t shy about sharing with Cristos how she felt.   She recognizes that she is falling for Cristos and is determined that she’ll enjoy the time she has left with him even though the fairy tale must come to an end but not because she’s not worthy of him.   She loved him and she put herself all in, as the poker players would say, regardless of the consequences.

What really makes a contemporary successful for me is when the conflict is primarily relationship related and in this case, the conflict was focused on Cristos and Isabelle falling in love despite what suspicions they had about each other and about the institution of love and commitment.

When I ended the book, I wrote to Sarah with the subject title “I needed an epilogue.”

Yes, me, the epilogue hater. I didn’t want one with babies but something showing them blissfully happy, riding their polo ponies, and making love in the moonlight. Or something. B+