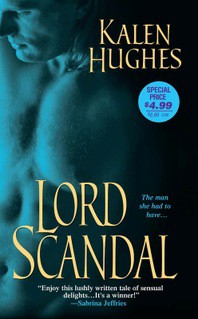 Last year I found “Lord Sin” to be a great and happy surprise. As you’d already written a follow up to it, I was poised for more happiness. Well, I was sorta happy but, alas, not quite as much.

Gabriel Angelstone can’t believe his luck when he discovers that the subject of the infamous divorce portrait is also a guest at the country houseparty of his newly married female BFF George. Gabriel happily anticipates some sexual fun until Imogen sets him straight. “No huggie or kissie” from this woman attempting to edge her way back into polite society.

After her boorish first husband believed the rumors which circulated through London society, he went to the extraordinary length to get a divorce. Can’t have rumors about one’s wife ruining one’s political future. Tossed out on her ass by her husband, banished by her family, Imogen has eked out an existence until George takes her under her wing and decides to resuscitate her life. Imogen’s hopes for this endeavor are simple and she’s aware that she needs to be Caesar’s wife. If only she didn’t find Gabriel so damned attractive and unable to resist.

Though the book follows “Lord Sin” and features many of the same characters, I don’t believe it necessary to have read “Sin” first. One thing that I noticed again is that there are a lot of characters. A ton of the ton, shall we say? So many that I had to sit a spell to try and remember who they all are and their relationships. And even after I was well into the story, I was still having to stop to untangle them in my mind.

I adore Gabriel Angelstone even though his name makes me wince. But at least his given name not some variant of Devil or Lucifer or some other totally asinine moniker. The nickname Brimstone I actually found kind of cute. Anyway, he’s great. He stays the same character through the whole book without suddenly doing an about face at book’s end. He knows what he wants, he’s open about it, he gives Imogen plenty of time to make up her mind. And then make it up again. He flirts with his body as well as his mind which just sounds like a delicious combination.

The grin that I got while reading how Gabriel routs Imogen’s bully of a brother almost split my face. Richard is such a rat bastard that I could fully picture Gabriel grabbing him by the scruff of the neck, like a terrier, and shaking him til Richard’s teeth rattled.

His unholy glee at challenging Imogen’s first ass of a husband practically radiated off the screen of my Sony. The duel scene was a hoot and along with the initial challenge shows how the sporting set is ready to stand behind Gabriel and Imogen. The fillip of humiliation that Morpeth adds with the doctor’s bill was the icing on the cake.

And if I’d had to chase after Imogen after she hightailed it for Scotland, riding in the pouring rain, on mud filled streets and roads, she would be shrinking back a little from me too. Gabriel goes to excessive lengths to get this woman and I hope he’s happy with her.

Because, oh sweet Lord, I got sick of waffling Imogen. At first she is living the quiet life just content with slowing easing her way back into society after the disastrous divorce from her husband.

— And by the way, but what exactly was up with the portrait? Why was it painted, who painted it and how did the rumor about Imogen’s infidelity get started? I would hope her husband had something besides tabby gossip on which to base his House of Lords suit for divorce. —

Then she’s depicted as having somewhat of an impish sense of humor – which could desert her at a moment’s notice and not show up again for most of the book – when she trods on Gabriel’s boots and routs him in George’s country garden. Then she’s determined to keep him at arm’s length. Then she wants him and allows liberties in the garden. Then she changes her mind when her brother threatens her and her emerging place in society is at risk. Then, wait, she decides to give in since they’re at the lodge after the rained out hunt but oh, she can’t make up her mind – should she let him come to her at night for the rest of the houseparty? Yes, let’s fuck like bunnies.

But no! After he asks her to freakin marry him – she can’t possibly allow that! She’ll be ruined. He’ll be ruined. Must deny, deny, deny him. But her traitorous body urges her to kiss him when they’re in London, and maybe they wouldn’t be ruined after all. Yes! Let’s get married. But only until Gabriel does what he must and faces down her ex-husband then – whoops, wedding’s off again and she must flee…

One minute she’s skirting around Gabriel the next she doesn’t want to let him take the lead. Then she’s shy then she’s going after sex like a cat in heat. I felt I needed a score card to try and keep up with her weathervaning changes of mood and mind. And I got truly tired of trying to understand her since I couldn’t.

The sporting men of the ton still worship George – which was no change from her own book. She’s still the same person as her book along with almost all the other characters so at least I wasn’t dealing with any 180 flips but it was easier to deal with all this worshiping in “Lord Sin.” It’s getting tiresome here. Let George sit the next book out and have its own heroine be the one who shines.

I like learning about life in the eighteenth century but others might be bored by the slow pace of large chunks of the book. Imogen learns to shoot a gun. Imogen learns about horse races. Gabriel grins and swans around searching out Imogen at house parties. George gets worshipped by her “set.” At times, it began to get tedious.

The head hopping might also drive some readers berserk. I didn’t have a problem with it as you quickly gave some clue as to whose head we were currently in but I know this is a bugaboo for others.

I’d snap up Gabriel in a heartbeat but Imogen annoyed me to no end. Still, I’ll be looking forward to your next book and hoping it delves even more into the emerging events in France. B-

This book can be purchased in mass market from Amazon or Kindle ebook format. (can’t find in other formats)

→ Jayne
Previous article: REVIEW: Tempted by His Kiss by Tracy Ann Warren
Next Post: REVIEW: Pleasured by the Secret Millionaire by Natalie Anderson