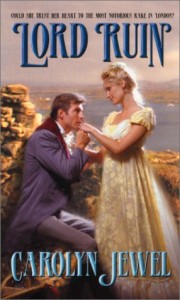 I had Lord Ruin in my TBR pile for a long time but for some reason I never read it until I had finished with Scandal. In some ways, I saw this as a prelude to what would become Scandal as the themes in the two stories are quite similar. I feel asleep after reading the book with my eyes wet and my throat a bit scratchy thinking why haven’t I read you before.

The heroine, Anne Sinclair, is the oldest sister of four. Her three younger sisters are beyond beautiful so that Anne, who is not unattractive, is forgettable except to one person.   Devon, who is now the Earl of Bracebridge, loved Anne four years ago and offered for her but her father turned him away given that he was without title and fortune. Four years later he has both and is ready to court and offer for her.

The situation is helped because his friend, Baron Aldreth has married one of Anne’s sisters. Devon invites Anne, her sisters, and his best friend, Ruan Bettancourt, the Duke of Cynssyr. Devon has the intention of declaring himself to Anne during this party. Anne realizes that Devon is paying special attention to her and the sparks between the two of them were not all one sided. She is glad. I say that intentionally because Anne is restrained in her emotions. She’s very internalized and she allows herself only small emotions.

Shortly after her arrival, Anne trips and falls. Because of the pain she is in, it is decided to drug her. Cynssyr hasn’t arrived so they put Anne in his room. Anyone can see what is coming next. Cynssyr arrives late at night. He’s a long time friend of Devon and so the retainers let him in and he proceeds to “his” room. When he sees Anne, he doesn’t realize that she is drugged, instead think that she is a whore gifted by Devon. Even when he encounters her maidenhead Cynssyr does not stop, but proceeds to find his own satisfaction. He is discovered with her at the tail end of their coupling.

What may be able to be swept under the rug or a scandal suffered and endured can not be in this case. Cynssyr has a very scandalous reputation and if Anne does not agree to marry him, he, his political ambitions, and his family will be totally ruined. Her family places it to her even though they want to kill him. Devon is crushed. He held a torch for Anne for four years.

In very short order Cynssyr realizes that he loves her but she doesn’t trust him, knowing that he has said that he loves others only to break their hearts. Complicating this is that Devon loves Anne and basically tells Cynssyr that its a good thing that Anne is morally upright because Cynssyr cannot depend on Devon to not betray him.

Anne wanted to marry Devon. She despise Cynssyr. She distrusts him. She does not like the reactions that his nearness, his attentions bring forth. Anne has been domineered by her father and cast in the shadow, albeit unintentionally, of her more brilliant sisters. Her personality has always been retiring and Cynssyr is anything but.

Ordinarily, I hate triangles. I become too emotionally attached to the third leg of the triangle and I am unable to extricate myself from the story to fully be happy for the remaining two. But because the triangle is resolved early on, I was able to appreciate Devon’s unrequited love and was moved by the way in which his feelings for Anne made the relationship between Cynssyr and Anne all the more fraught with suspense.

Cynssyr spends much of the time trying to atone for his sins in a very hamfisted way. While he is a notorious rake, his only skills are really flirtation and seduction; not wooing. He succumbs time and again to the physical expression of his feelings which only serves to reinforce Anne’s bad opinion of him. Sure, he can fuck but can he really love?

The external suspense plot regarding a serial killer targeting women with red hair and the weak treatment of the culmination of the love triangle led lowered my overall enjoyment of the book. This is a flawed story but original. B

This book can be purchased in mass market from Amazon. Your best luck will be with a Used Bookseller. I’m not sure the title is still in print. The publisher is Leisure and the ISBN is 0843951354.