REVIEW: Lines in the Sand by Lyn Gala 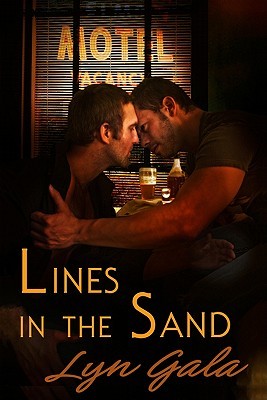 Three years ago, Carl Ragar turned on the mob. His conscience couldn’t handle the murder of an innocent bystander, and he had to turn his back on his mentor, Petroc “Pete” Barbu, a man he’d admired and lusted after. Pete made no apologies for his job as an enforcer, but he’d never planned to get himself or Carl involved in the murder of a reporter. When Carl turned state’s evidence, Pete couldn’t even pretend to be surprised.

Now Pete’s still on the run, and Carl is unceremoniously dumped out of witness protection. Two men tangled in their own pasts, they will have to face the shifting moral lines in the sand that drove them to make disastrous choices. Once Pete and Carl were partners who trusted each other with their lives—now they’re struggling to save their souls.

This was the second story by you that I read and the one I enjoyed the most before Ondry and Liam became my favorite couple from your books. I reread it right before starting this review and it held up quite well for me.  I do have to say, however, that I had to work harder at suspending my overall disbelief this time around, and that made me wonder whether I still liked it so much because quite a few things in this story are my catnip, or because it truly has good characterizations and a strong plot.

Of course every review is the subjective opinion of the person who wrote it, but I always try to give higher grades to story which not only worked for me but was well executed, as opposed to the story which hit my happy buttons, but which I could see had flaws of execution. When I’m not sure or not able to separate the two, all I can do is try and identify the things which I was drawn to so it will be easier for the readers to decide if the story appeals to them or not.

So, what we have here as a setup is what the blurb describes. Redemption! REDEMPTION! I’m drawn to the stories which have redemption themes, I always have been and probably always will be.  And I thought the trope was carried out here in a nuanced, thoughtful way. The characters at the end do not become white fluffy bunnies, but they approach the idea of killing people with much more caution and hesitation than before. In other words, what seems like a small step was in actuality a really big step for Pete.

Where redemption was concerned, Carl had already made a major step when he turned his former comrades in three years ago, went into witness protection, and sat through a trial where some of the consequences of their crimes stared him in the face. So Pete is the one who gets to experience major growth as far as redemption is concerned. In this story he is starting from a very low stage and does not have anywhere to go but up.

Carl gets to experience some growth too, but his is mostly about figuring out the relationship with Pete. They were in lust with each other when they were in the mafia together. Pete killed people, or beat them up as the boss ordered, or gave orders to beat them up, and he made no apologies for that. Carl fixed cars and helped Pete and his fellow mob guys bury bodies. They were both such “wonderful people,” but it made so much sense to me that in our mind we can always come up with justifications for the awful things we do. Pete was just killing bad people after all, so who cared? The only guilt he felt was about getting Carl a job in his gang, because he knew Carl was not a killer. However, as I said, Carl’s line in the sands apparently only crumbled when Pete’s employee accidentally killed an innocent bystander. That he could not deal with and went to police.

But Carl had very strange idea of what to tell the police about Pete. He told them about his involvement with the murder, but he said nothing about where Pete might go to escape being captured, and more importantly, where Pete kept his money. Pete managed to get away while his boss and many other people went to prison.

Carl went to prison for six months and then to witness protection. And now three years later he is not in a witness protection anymore (?!). Or maybe he was? This was so weird that I gave up trying to understand – they could not find him a job working on cars, so he came back to his neighborhood to fix cars (where it is super dangerous for him) and the police either do not check on him at all or check rarely.

Then one day Pete comes back, tells Carl to get in the car, figures out that Carl really has no backup plan to stay alive, and takes him to Mexico. Pete has been hiding out in Mexico, running a car shop, so he tells Carl he has a position open for a mechanic and Carl had better take it. Carl at first thinks Pete came to kill him in revenge, but Pete apparently is truly interested in protecting Carl rather than killing him, so off to Mexico they go.

Carl apparently is bad at reading people, especially Pete, and a couple of times he jumps to wrong assumptions about what Pete wants and does not want. But I was surprised and pleased about how this was resolved and thought that it moved their relationship forward very nicely.

“I’m sorry,” Carl said softly, and he was. He was sorry he couldn’t hold his tequila, he was sorry he’d propositioned Pete, he was sorry he’d stolen the car, and he was really sorry he’d got caught. “You make a habit out of assuming the worst, don’t you?” Pete asked, his eyes on the road, but he had that tight expression on his face and his knuckles were white from gripping the wheel. “What?” “Why’d you run?” Carl didn’t even bother answering that, it was so obvious. “So, either you thought I’d beat the shit out of you or you’ve really lost your mind and you thought I’d kill you over some stupid, drunken comment.

“Beat the shit out of,” Carl admitted softly. Pete snorted. “At least you didn’t assume I’d track your sorry ass down just to kill you.” Pete didn’t say anything after that, and Carl settled on watching the landscape. They passed a grouping of brightly colored houses, and Pete took an exit and got on the northbound lane of the highway. Carl looked at him, but Pete just kept driving, his face grim.”

Besides finding the story very romantic, I also found it incredibly hot (which does not happen often at all) – but this is where my previous warning very much applies. Pete and Carl engage in dominance/submission games. There are almost no toys of any kind (handcuffs make an appearance once, but that’s it) and it all felt very organic to me, but beware if you don’t like it.

Why did I have to work harder than usual at suspending disbelief? Well, I just don’t usually buy hired mafia killers forgiving somebody who turned them in, even if said someone did not betray them completely. I am not usually too keen on buying the redemption of hired mafia killers either, but in this story I went along with it.

Also, while this is not something that required suspending disbelief, Pete’s comments about why he preferred men to women were kind of misogynistic. However, remember that Pete is not a good person when the story begins so I actually did not have a problem hearing those comments from him ( they were not that awful to me, just annoying – women are too much work, talk too much, etc).

I was really conflicted about grading this one and the best I could do was giving it a dual grade.

Grade B for romance and redemption and B- for believability of  the set – up.