REVIEW & GIVEAWAY: Legend of the Werestag by Tessa Dare

Update: I’ve closed the comments and will announce the winners later today. Thanks everyone. It was fun to read the comments. 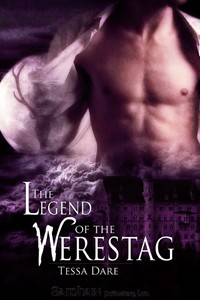 Thank you for sending me Legend of the Werestag. I’ll confess that when I first heard of it I thought it was a paranormal regarding shapeshifting animals and I wasn’t convinced that I would buy into the werestag mythology. Fortunately for both of us I wasn’t challenged by this because this story is a pure historical novella, one of the better novellas I’ve read in a long time.

I have this love/hate relationship with novellas because while I like the short length, I don’t think every story is well suited to novellas. Legend, however, is one of those stories in which the entirety of the tale fits well within its shorter confines.

Miss Cecily Hale had loved Lucas, Viscount Merritt, for years. Before Lucas went off to war, Cecily and he shared a moment, one that Cecily would draw out and savor while Lucas was gone. Since his return, however, he’s not made one move to extend that moment into something more permanent. Cecily sees that Lucas is not the same man that he was before the war. He has a hunted look in his eyes, wary of those around him.

Matters come to a head one night when Cecy, Luke and their friends are at a house party.   Upon urging, their host, Denny, tells the story of the Legend of the Werestag.

"And we certainly can’t call him a man-deer. That won’t do at all." Portia chewed her pencil thoughtfully. "A werestag. Isn’t that a marvelous title? The Curse of the Werestag."

Brooke turned to Luke. "Rescue me from this madness, Merritt. Tell me you retain some hold on your faculties of reason. What say you to the man-deer?"

Luke circled the rim of his glass with one thumb. "A cursed, half-human creature, damned to an eternity of solitude in Denny’s back garden?" He shot Cecily a strange, fleeting glance. "I find the idea quite plausible."

In a moment of honesty, Lucas admits to Cecily that the moment that she treasured was something of less import to him but that he remembered and that the one thing he wants right now is for nothing more in his world to change:

“…And that now I return from war, to find everything changed, myself most of all. I scarcely recognize my surroundings, except-" He cupped her chin in his hand and lightly framed her jaw between his thumb and forefinger. "Except Cecily Hale still looks at me with stars in her eyes, the same as she ever did. And when I touch her, she still trembles."

Oh. She was trembling. He swept his thumb across her cheek, and even her hair shivered.

"And suddenly-" His voice cracked. Some unrehearsed emotion pitched his dispassionate drawl into a warm, expressive whisper. "Suddenly, I find myself determined to keep this one thing constant in my universe. Forever."

Lucas believes it is better for him to have the unrequited love of Cecily, even if she should marry someone else, than to sully her and to watch her stars dim as she gets to know what kind of man he has become.

But Cecily was determined because if she waited for four years for Lucas, she could convince him that she was the right person to embrace his beast.    I was even amazed that there was a secondary romance slipped underneath the heat and tension of Lucas and Cecily. But even more than the story, it was the writing. The story was so smoothly told with rich evocative descriptions and the use of dialogue to convey love, longing, and wistful regret; showing the reader the true motives and feelings of the characters rather than telling us. I particularly appreciated the elegance that was displayed during the sex scenes making those scenes sexy and beautiful but not boorish. It’s easy to get lost in the world of Tessa Dare’s writing.  B+

This ebook can be purchased at Samhain.

As I stated earlier today, we are giving away 10 digital copies of Legend of a Werestag and 3 copies of the late July release of Goddess of the Hunt. After you’ve read the review, drop a comment as to why you think you should get a copy of the book (ie., you love werestag stories or you hate historicals but are intrigued….)