REVIEW: Kanaan & Tilney: The Case of the Arms Dealers by Jenna Rose and Katey Hawthorne

SiriusB Reviews / B Reviews Category / B- Reviewsmystery / paranormal mm romance / private investigators / werewolvesComments Off on REVIEW: Kanaan & Tilney: The Case of the Arms Dealers by Jenna Rose and Katey Hawthorne 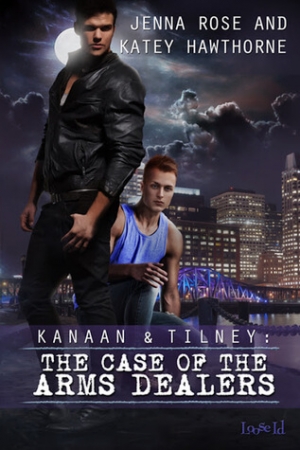 John Tilney, praeternatural pyrokinetic and mystery author, has noticed the bottom dropping out of the market for his usual gothic fare, so he goes to Lowell Kanaan, PI, for a crash course in noir. Lowell, the cranky wolf-shifter detective, isn’t sure why he agrees to let John shadow him–though it might have something to do with John’s weirdly endearing honesty…and pretty lips. John thinks he’s found the perfect detective novel hero in Lowell, but it isn’t long before he realizes he doesn’t want Lowell for his book, but for himself.

As they become entangled in a supernatural whodunnit involving the Zombie Mafia, black market body parts, and shady insurance deals, their partnership grows closer–and hotter. But when it comes down to the wire, Lowell’s wolfy protective side threatens to drive John around the bend, or at least out of the office. Good thing John’s as much sunshine as he is fire; hopefully, it’s enough to help them catch a murderer before they end up–literally–in pieces, too.

I was surprised at how much I liked your book. I’ve read a few books by Katey Hawthorne before and remember them fondly, but she did not become an auto buy author because, well, there are too many new writers to try and not enough time in the world.

I bought this book because I still like werewolves and I find too few stories with them which I end up enjoying. But since I was familiar with one of the authors’ works and I am often drawn to mysteries, paranormal or not, I decided I wanted to give this book a try.

The book is set in the world similar to ours, where people with paranormal abilities seem to be out in the open – there are pyrokinetics, telepaths, empaths, etc. We also have shifters (they are called Beasts) and of course there is tension between and inside all the factions. Racism parallels were drawn, but it was my impression that they more or less managed to coexist with each other, as well as with people without any paranormal abilities. I did not think that world building was particularly unique or detailed, actually.

As the blurb states, John wants to research police work for his new mystery book and in order to do that he goes to the police department and asks to shadow a detective, The police department laughs at his jokes and pretty much dismisses him, but then, because they find him amusing, they send him to private detective Lowell Kanaan, who also happens to be wolf shifter.

John decides that he does not mind shadowing a private detective and asks Lowell if he can be his assistant. Reluctant at first, Lowell is impressed by John’s resume and agrees to take him on if he will work for free. John thinks the book will eventually makes money and takes the position on those terms. If I were to describe John with one word, I would probably say “charming”. The guy literally has no filter and cannot lie (except in his books as he says), but somehow I ended up smiling at most of what he had to say instead of rolling my eyes.

Of course they quickly wind up having sex (maybe at thirty percent of the book) and I was ready to stop at this point, because I was thinking something like – oh yes, now their investigations will be constantly interrupted by them not being able to keep their hands off each other. But I kept reading. The sex was sweet and hot, and at times funny too, and I was impressed. Somehow the writers managed to write a thorough investigation of a mystery without frequently interruptions for sex. And although the book had quite a lot of sex (I did get tired of it just a little bit by the end, but that’s my preference and did not count towards lowering the grade at all), it all fit the story and did not make the characters look like idiots even once. I was even okay with the Lowell and John being Boss and Assistant, probably because they really were not that. It was very clear that John’s job is a temporary one which he can quit at any time and he was not getting paid. I guess I did not think that there was any imbalance of power with Lowell being his temporary boss.

Let me talk about how impressed I was with the mystery part of the plot. I liked that it was so very mundane – Lowell deals with several small cases, which to me seemed to be a very realistic description of what a PI would have to deal with every day, but their main case also started out as mundane – a disappearance which ended up being a murder case. This murder case was about insurance scams and other scams, which felt very realistic. I think the ending rang especially true for me (based on what I heard and read, not based on any first-hand experience). They found the villain, they called the police (whom neither of our heroes particularly likes, but they still did what they had to do) and the police came and arrested the person. They acknowledged the anticlimactic end of their investigation to themselves, but surely not every case has to end with the big chase/ big fight, sometimes cases end like this one did.

I think I appreciated that even though this world has supernatural things happening in it, I appreciated how believable the story felt to me, Zombie mafia notwithstanding.

Lowell being a wolf shifter ended up him just being one, which I think I also liked. His Beast part may have felt protective towards John, but there was no mating of any kind. It was just part of who he was.