REVIEW: Just Like Me, Only Better by Carol Snow 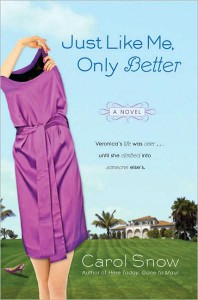 “Just Like Me, Only Better,” is a book which Jane included in my arc shipment and which I opened with a “why not” attitude. I needed to weed down a towering pile and this one just happened to be on top. Good thing as I ended up chuckling the almost whole way and liking it a lot.

Veronica is trying to rebuild her life after her older husband found true love (with another) and moved out. Now she and her young (shared custody) son are living in a postage stamp sized guest house and carpooling the owner’s two obnoxious children to the school Ben attends and at which Roni substitute teaches. Still clinging to the edges of the same neighborhood which saw her get dumped, Roni endures the false sympathy and avid interest of her acquaintances watching her try to put her life back together.

So when friends take her out to an upscale restaurant in L.A. for her birthday, she dolls up to have a good time. And keeps being interrupted during the meal by all the staff and fellow diners who think she’s Hayley Rush, yes *the* Hayley Rush, the Hollywood starlet. When one of these people introduces himself as Hayley’s manager and asks to call Roni later, she says yes just to get rid of him. His proposal for her to impersonate Hayley in public to allow the paparazzi some staged “candid” photos comes with a salary of $100/hour and the chance to play at being a star. Roni agrees but honestly has no idea what she’s letting herself in for. As she begins to see behind the false glitter, a possible romance beckons but is it real or just another Tinsel Town illusion?

The thing that caught my attention immediately is the humor of the novel. I found it very, very funny but in a natural, laid back, self depreciating way. Since it’s an evolution of the Chick Lit novel, I’d expect some humor but this is more let’s laugh with Roni instead of at her. Or let’s contrast down-to-earth substitute teacher Roni with the flakes and weirdos who surround Hayley and her lifestyle. But even then, you pull back from going too OTT with the L.A. characters so that I can still – sorta – believe them.

And I did enjoy watching those silly Hollywood Hayley “staff.” Her harried manager, her screen writing personal assistant, her snarling cook, her stuck up stylist and – the hands down winner of the “I’d love to dish with him for a 2 hour long lunch” – her hair dresser, Stefano. Sure, he’s every caricature of the Gay hair dresser but even he admits that as he takes Roni blonde and adds her hair extensions.

Then just when I’d be on overdose of Hollywood and the ridiculous people who thrive on it, Roni’s regular life would arrive to contrast with the glitz and ground the book. Ben acts like a little boy complete with the issues that would arise from split custody and a father living a wealthier lifestyle as well as a 7 year old boy who hates it when his mother’s late to pick him up. One thing I really like is that Roni’s ex isn’t turned into some monster. Yeah, he’s something of a jerk for the way he ended his marriage but he obviously loves his son and did once try to do the right thing by Roni. And thanks for including some scenes of Roni being a teacher. I hate it when a character’s career/job is little more than window dressing in a novel.

I nailed where the romance was going to end up but have to admit that this is my least favorite aspect of the book. Roni, who is normally so level headed, seems to lose her mind. She acts like a love struck teenager who’s thrilled that the star athlete of her high school just noticed her. It almost got a little embarrassing. But at least she doesn’t have to deal with a lifetime of that you.tube video coming back to haunt her since the world thinks it’s Hayley.

Roni finds out a lot about Hollywood but also discovers things about herself and ends up growing as a person. And this is what clinched the book for me. If she had gone through all that she did and was no stronger for it, the grade would have taken a nosedive. But she learns from all her experiences and looks like she’s actually going to put those lessons to good use in what she does with her life from here on. And that’s what allowed me to close the book with a happy smile. B

This is a trade paperback published by Penguin. The ebook price is $9.99.