Note: There might be details in the review that some might view as spoiler-ish.   Just an FYI. 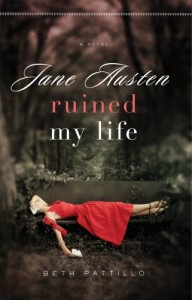 A copy of your latest book, “Jane Austen Ruined My Life,” was included in one of the recent arc packages Jane sent to me. Since I’ve enjoyed several of your previous stories, I made sure to put it close to the top of my reading “To Do” list.

When she was a young grad student, Emma Grant thought she’d found her Mr. Knightley. But as she said herself, he actually turned out to be her Mr. Nightmare. Now divorced from her academic star and tenured professor husband – after she caught him doing her teaching assistant on their kitchen table – she’s flying to England. The divorce not only cost her her marriage, she’s also lost her university teaching job due to Edward and the slut’s allegations that Emma plagiarized a paper. As Emma says, one whiff of scandal is enough to derail an academic career, especially when one’s opponent is as respected as her former husband is.

Emma’s got one last chance to resurrect her career. If she can find, publish and write a paper about what she thinks may be lost letters of Jane Austen, she knows she’ll be accepted back into the academic fold with open arms. It all hinges on the mysterious Mrs. Parrot with whom Emma’s been corresponding. Emma must undertake a series of tasks, as Mrs. Parrot calls them, to prove herself worthy of access to the letters, which Mrs. Parrot dangles before Emma like opium before an addict.

With her future, and access to all 3000 of Jane Austen’s not only unpublished but unknown letters, on the line Emma doesn’t really have much choice. And thus she begins a series of journeys around southwestern England to various Austen locales and in doing so, Emma learns not only about Jane Austen’s private life, but much about her own.

First off, anyone who decides to read this book needs to just accept the premise. That there are that many unpublished letters from a beloved author of whom the world hungers to know more. And that there is a secret society, btw I love Emma’s joking reference to them as the Jane Austen CIA, which has undertaken to protect and keep them hidden from the world at large. Though in real life I would find this almost impossible to believe, this is, after all, fiction and you can do whatever you will.

Having said that, I found Mrs. Parrot and Miss Golightly to be delightful. If anyone could be members of a secret literary society, I’d pick these two. I’d also love to have free reign to wander through Mrs. Parrot’s Victorian London home and the key to private garden reserved for the Square’s homeowners.

It’s easy to see that you took your time visiting all the sites mentioned in the book. The descriptions of them put me right in the scenes with Emma and through her eyes, I got a lovely tour of London, Bath, Lyme Regis, Steventon and Chawton. Your trip to Hatchards must have been fun and a tour of the rare manuscripts and books in the British Library would have sent shivers down my spine. Researching all this would be the kind of background book work that I could really get into.

From the minute Barry appeared in the story, I wondered about him. He just seemed too much like Wickham – charming and so interested in Emma as he turned up at just the right times. But for his purposes, couldn’t he have just followed Emma to her London source? Done a little B&E? This part did strain the belief I was willing to suspend about the plot.

Now Adam is, as Emma finally realizes, the type of man to keep around. And he certainly is willing to wait for Emma, and put up with her quest, and feed her, and not pry into her secrets. I want one of him. Though if he hadn’t expressed at least some frustration with her by the end of the book, I would deem him too good to be true even for a fictional book.

If you had ended the story with Emma finally finding her true love, falling into his arms and the scene fading to the credits as it does in all the screen adaptations of Jane Austen’s novels it would have had a momentary “feel good” quality for me. After all, who doesn’t love a happy ending? But for Emma, given her past, this just wouldn’t have worked.

For she, at one time, had thought that she’d found her life’s hero. She’d married him, begun a life together doing things they both loved, lived what she thought was her “happy ever after” and had ultimately found that just getting the hero to propose and show up at the alter isn’t enough.

Her tasks to prove herself to the Formidables show her that a happy ending isn’t guaranteed to anyone. There’s luck and a lot of hard work needed to find and keep a life partner. And one can’t totally blame another for things not working out. Since Emma was willing to put her dreams on hold and allow her life to be dictated to her, she bears as much responsibility for the failure of her marriage as anyone.

It was a hard lesson to learn and to admit to herself but once Emma does that, I can see why she makes the choices for her future that she does. As she got burned riding the coat tails of her tenured husband, she needs to make it on her own in the academic world. And after she rediscovers her life long love of writing, it’s obvious to me that she needs to explore where this might take her before risking her heart a second time.

The manner in which Emma learns all this might be straight out of a novel but the lessons are age old. Jane Austen might have seduced Emma with the heroes of her books but Austen never actually offered anything to readers beyond the pleasure of reading her novels. I think Emma is headed in the right direction towards who and what might be her HEA and I wish her well. Now if we could only get a final book for Betsy Blessing, I’d be delighted. B