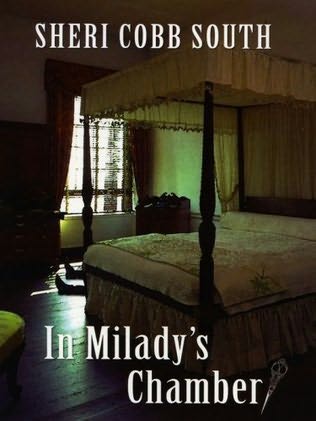 Of all your regencies I’ve read, and that’s most if not all of them, I don’t recall ever reading a bad one. They are well researched, well written, and feature strong characters. But best of all, they’re different. I realize this has made it harder for you to market them but I think it makes them worth the effort to seek out.

When one is a Viscountess in Regency England, one might be thought to be happy. Julia Runyan Bertram, Lady Fieldhurst, is young, pretty, and married to a man of wealth, title and position. Yet, after six years of a childless marriage, she feels the disappointment of her husband for not having produced an heir much less a spare. She’s under no illusions as to her husband’s fidelity and after a small spat before she leaves for an evening ball, she decides to finally take a lover of her own.

But her husband Frederick manages to ruin even that. Well, he didn’t plan to be murdered and found by Julia and Lord Rupert as they tried to enter her bedchamber later that night but nonetheless, it did put paid to their plans. Discovering one’s husband, dead on the floor from a pair of embroidery scissors in his neck will do that.

Mr. John Pickett, twenty-four years old and newly promoted to the Bow Street runners from the foot patrol, is a bit dazzled when he sees the person who’s called for his services. Lady Julia is simply the most beautiful woman he’s ever seen. But not even a vision of womanhood distracts him long from the job at hand. Someone has murdered the Viscount – after all, how many men would choose it as a method of suicide? – and the authorities want an arrest quickly.

Pickett soon amasses a group of possible suspects, all of whom had a possible motive and the opportunity to have done the deed. At the top of the list, to Pickett’s dismay, is Julia herself. Resisting the pressure of his superiors, Pickett slowly begins to work the case, interviewing suspects, examining clues and, even to his own mind, desperately trying to clear Julia. It’s hard, he discovers, to remain dispassionate about a case when one is entertaining daydreams of one’s chief suspect, however unlikely that anything could ever come of them.

Lurid broadsheets about the case and the gossip of the ton increase the pressure on Bow Street to solve the crime. Will Pickett be able to control his feelings long enough to prove that Lady Julia didn’t commit the crime and find the one who did? And if he can, how will he be able to walk away in the end?

The more things change, the more they stay the same. Just like his modern successors, John Pickett has to deal with the politics of police work, the public clamoring for a case to be solved yesterday, the matchmaking efforts of his land lady and the relatively poor pay deemed acceptable for his profession.

The gossips want him to “tell all,” the powers-that-be are willing to lie to cover up what they don’t want known, his superiors look down upon him and the witnesses suddenly can’t be found. Yeah, just another case in law enforcement. Pickett is new to his job so his missteps during the investigation are understandable. But he learns quickly and doesn’t repeat them even as he relies on his natural instincts to guide him along.

Julia, who’s been controlled by men, however gently, her whole life suddenly discovers that her widowhood has opened a whole new world for her. By the terms of her husband’s will, she can live comfortably on her own with no need to remarry and subject herself to another husband. For a Regency woman, it’s as much independence as she’s ever likely to get.

At first, she misunderstands the motives behind Pickett’s line of inquiry, not ever having dealt with criminal investigations. But once the situation is explained to her, she begins to find in herself a desire to prove her own innocence and a bit of talent in helping things along. I found her actions in line with her upbringing, her intelligence and her place in society. She’s not suddenly going to become one of Charlie’s Angels.

I like the glimpses we get of her background as a woman of position in this world. Her husband’s tenants fondly recall the Harvest festivals she held for them every year and lament that the new, tightfisted Viscountess is unlikely to continue them. As well, Pickett is impressed by her desire to help a servant who helped her as a young, newly married woman.

The solution to the mystery didn’t take me totally by surprise. It fits the clues you give and, again, is an age old aspect of murder. I enjoyed the Regency setting and the way you explained it to the lower class John Pickett as a way of explaining it to the reader. That also served as a way to underscore the differences between John and Julia’s social standing. While John might long for Julia from afar, he’s well aware of the gulf that separates them.

As to Julia’s feelings for John, I guess I’ll have to wait to read book two, “A Dead Bore” to see if they might progress beyond professional admiration and friendship. I’ll admit I’m looking forward to discovering how things might turn out. B