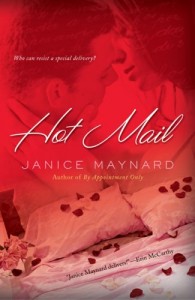 Too often I find that contemporary romances are full of characters who are just that, characters, and not real people. The heroines are cutesy or clutzy, the heroes are assholes or angst filled emos, and the set ups are way too far out there for me to believe. It’s nice to find an occasional quiet, character driven story about normal people doing, well, fairly normal things.

Jane Norman has decided that it’s time to pursue her long term attraction to a man who’s been her friend since high school. Back then, Ethan Oldham was one of the few boys who was actually taller than Jane. Now he’s also a down home guy who’s a buddy. Jane feels not only comfortable with Ethan but finds him hawt. However she’s getting tired of waiting to see if he’ll ever take their friendship any further. So on New Year’s Eve, she’s sitting down writing poetry to mail to him. Naughty poetry. Hot mail.

Ethan got burned once in love. His former fiancee turned out to be someone he couldn’t wait to get away from. Though he’s dated since then, he hasn’t put a whole lot of thought or energy into finding The One. When his older sister challenges him to socialize and mentions how well he and Jane go together, Ethan’s first thoughts are that Jane’s a friend, a pal, but not a date. When Sherry won’t relent, Ethan vows that if he’s going to enter dating hell, he’s dragging her with him.

As the assistant police chief, it’s Ethan who finds himself getting thrown together with Jane when someone begins vandalizing her downtown store. And so they begin seeing each other, without either thinking they’re really dating. And proximity leads to some hawt sex that blows their minds. But is it possible to find lifelong happiness with someone who’s your best friend? And who’s the mystery person who keeps mailing him sexy cards once a week?

As I said, this is a nice contemporary about friends turned lovers. The book centers on two relationships: that of Ethan and Jane and the secondary romance of Ethan’s older, divorced sister and one of his police officers who is a younger man. The mystery of who is vandalizing Jane’s store is woven through the story but doesn’t take top priority in the plot. It’s more a reason to get Ethan and Jane near each other so they see how well they go together and discover how hot the sexual chemistry between them is.

I love that his great heroic gesture of carrying Jane up the stairs to her apartment throws his back out. Here’s a mid 30’s reality check. And then he’s so guy about not wanting her to see him in pain or bent over like a troll as the muscle relaxants kick in. And even then part of his brain is being a boorish male and wanting sex.

I also laughed at his initial reaction to the first anonymous poem. Yeah, he’s a police officer. He knows freaks and whack jobs roam the land. He’s seen “Fatal Attraction.” He’s turned on by someone sending him naughty poetry but he’s not ready to run out and jump into bed with some unknown person. Then poor Jane has to deal with being jealous of the fact that Ethan is getting hot mail from her – and upset that he’s not telling her about it. But his reasoning does make a little sense.

Though I liked Randy and Sherry’s story, I did wonder at how quickly they fell for each other. I’ve heard that men hit a certain point in their lives and are ready to get married RIGHT THEN and will ask the next reasonable female who crosses their path. It kind of seems like what Randy is doing. Plus, does Sherry have to turn herself into a martyr? Yeah, she made a mistake early in her life but she’s been made to “pay” for it by a so-so marriage, divorce, then 10 years of celibacy. Now she whinges on about being older and not being able to give Randy children. Come on down from the pyre, sister, and close your Bic lighter. You’ve done enough penance to “deserve” a HEA.

Running a stationary store seems to be the new “In” business for romance heroines. Is there really enough profit in one to support someone? Especially in a small town? Okay….That being said, Jane is shown to be a hands on owner who obviously knows her store. Though how she can afford a part time employee is a mystery. But it does give her plenty of time to run errands, run off her sexual frustration, go get lunch with Ethan, mail her naughty valentines…must be nice to be able to take off so much time during the day.

Ethan is shown doing mainly day to day mundane police stuff. There’s a little bit of time devoted to his efforts to track down the vandal but it’s mainly long shifts and paperwork for Ethan instead of cutting edge CSI stuff.

I liked Ethan and Sherry’s relationship. She bosses him around a little, points him to the signs that maybe he should consider dating Jane. He looks after her, worries about her being alone. They kid and tease each other. They have a nice, normal sibling relationship.

The ultimate identity of the vandal was pretty easy to guess and his stupid reason for doing the break-ins makes sense of anyone’s ever listened to or read “Dumb Crook News” reports. The criminal element really is fairly stupid.

Ethan manages to convince himself that Jane is just a friend. Even after he’s 99.99% sure she’s the one sending the hot poems, he still is able to talk himself into believing that it’s someone else. And he can’t see the potential relationship with Jane for the trees. It takes Sherry to point out the obvious – which seems guy. He’s also confused that Jane doesn’t immediately being to dissect their current and potential future relationship post sex. It’s what most women do and the fact that Jane doesn’t flips him for a loop. Though I’m not sure about Ethan’s reasoning for not trying to hook up with Jane after his broken engagement. If he was ready to settle down and get married, then why not? This whole, “I don’t want to risk our friendship” thing seems more a woman’s argument.

The marriage is awfully quick but then these two have known each other for almost 15 years so it didn’t bother me. I like that Jane doesn’t wail about her biologic clock ticking, or needing someone to move heavy furniture, unplug her sink or kill bugs. She wants companionship, closeness and a relationship but isn’t in the hurry that so many 30-some heroines are in. She just wants to “kick Cupid’s fat pink butt cheeks” and get things started.

My fellow blogger Jane currently has a campaign to save the contemporary. She talks them up whenever she reads a good one and that’s what I hope this review will do. Point out one I hope won’t be missed and that I had a fun time reading. B