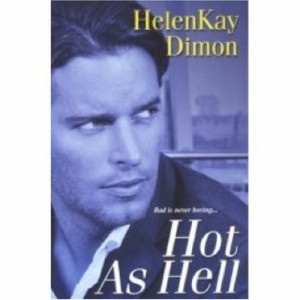 Thank you for sending me Hot as Hell. I think the guy on the cover looks a bit like Tom Brady, of whom I not a big fan but I promise I didn’t hold it against your book. I think the complaint I had from the last book is that the plot kind of fell apart on me at the end. This book had a much tighter plot, the same good dialogue that you expect from a HelenKay Dimon book, but (damn those conjunctions) I felt a little distant from the characters until the end.

Lexy Stuart had fallen in love with Noah Paxton until she found out that he was cheating her brother’s company and putting the Stuart name and business in jeopardy. This is just icing on the unhappy Noah cake that Lexy is ready to set aside. Noah, despite his impending marriage to Lexy, fails to divulge many details about his past and when Lexy learns from another source that this is Noah’s second marriage, she blows up and leaves him. Getting out of town and escaping to a health spa in Southern Utah serves the dual purpose of recovering from her broken engagement and finding out who is selling secrets about her brother’s business.

Noah Paxton isn’t about to give up on Lexy even though she walked out on him. He knows that they belong together (and not in a creepy stalker way) and if staying at a health spa where you can’t drink beer or get a decent steak is going to rekindle their relationship, he will live with that. (Actually he smuggles in some beer).

It seemed that Lexy and Noah were given . . . quirks, for lack of a better word, to provide extra characterization. Noah’s was more authentic to me, or at least it felt more believable. Noah was a former government agent with highly classified background. If not outright lying about his past, Noah is used to leaving out a lot of details. As it pertains to Lexy, he doesn’t really recognize why he needs to share details from his past when all he is concerned about is his future with Lexy.

Lexy’s quirk is a significant one, one that seemed to be serious enough to require medication. Lexy had a collecting syndrome that is a holdover from her parents. Her parents were packrats to the extent that Noah described it as a sickness as the entirety of Lexy’s childhood home was filled with things to the point “until all that remained was a thin strip of carpet leading from one room to another on which to walk.” Noah goes on to theorize that the sickness was “[o]ne that edged up on Lexy now and then.”

I think the problem with the story and why I felt distanced was that there did seem to be foreshadowing that Lexy had a serious mental disease that would ultimately play an important part over the course of the book. This “conditioned hoarding” was not seriously addressed again, though, until the last few chapters of the book. There was a point in the story in which Lexy does refer to past therapy, but it seemed clear that it was still a problem. Further, I felt that Lexy caved into Noah too early after declaring him to be off limits.

There is plenty to like even though I was disappointed by Lexy’s character arc. Your books always have strong repartee and that is evident in this story. Noah’s interaction with Lexy’s brother and another co worker had that genuine buddy feel to it, i.e., the male exchanges sounded like male exchanges and not females with penises conversing. I also like the way that the story ended which required both characters to face up to their faults and recognize that their failures in the past were dual failures, not one party being more at fault than the other. There was also a sequel bait twist which I appreciated and had not seen coming.

In all, my enjoyment outweighed my disappointment although I did feel like I never got the full story on Lexy or Noah. B-