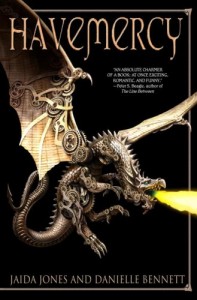 Like my fellow Dear Author bloggers, Jane and Janine, I’m participating in Keishon’s 2009 TBR Challenge.   Unfortunately, I seem unable to follow directions and completely failed to meet this month’s theme.   Again.   That sound you hear in the distance is probably Jane laughing at me.   Again.   In my defense, your book does meet the barest requirement: it was in my TBR pile.   I was in the mood for a traditional fantasy, so I dug it out and dove right in.

For over a hundred years, the country of Volstov has been fighting a war against the Ke-han Empire.   As might be expected from an extended conflict that spans multiple generations, it has periods of active conflict interspersed with lulls.   It’s against the backdrop of one of these quiet periods that Havemercy opens, introducing us to the lives of four men.

First, we meet Royston, a magician who gets exiled from the capital of Thremedon for a scandalous homosexual affair with a foreign prince.   It’s not so much that he engaged in the affair; Volstov is generally more accepting of such relationships.   The problem is that his lover comes from a country that isn’t.   And when their relationship is exposed, the prince chooses to accuse Royston of using his magic to coerce him.   Never mind the fact that Volstov’s brand of magic doesn’t work that way, and that Royston’s magical ability is solely dedicated to making things explode.   But Volstov needs the alliance with the prince’s home country, so they have no choice but to make an example of Royston.

For his exile, Royston is sent to his brother’s country estate.   It’s here that we meet Hal, a young tutor who takes care of the children.   Though Hal is a naÃ¯ve country bumpkin, he’s extremely bright.   He immediately becomes fascinated with Royston, who — as a result of being burned by his former lover — holds him at arms’ length, not wanting to take advantage of the much younger man.

Then we’re introduced to the Dragon Corps, Volstov’s elite fighting force who’ve been instrumental in the war against the Ke-han.   Rook, a Dragon Corps pilot, is accused of raping a diplomat’s wife.   While he didn’t rape her, he did indeed sleep with her.   Unfortunately, he also mistook her for a whore and tried to pay her afterwards, which she took as an egregious insult.   Wanting to avoid yet another international incident, Volstov decides that the Dragon Corps needs to be taught the manners necessary to function in proper society.   The poor person assigned this horrendous task is Thom, a university student.   Needless to say, Rook and Thom don’t get along.

Of course, the stalemate doesn’t last for long and the war starts up again in earnest.   Rumor has it that Volstov is on the verge of winning, once and for all.   Except, as our protagonists discover, that might not actually be the case and in fact, may be as far away from the reality as possible.

So let’s get to the main reason why I chose this book over the others in my TBR pile: metal dragons.   Yes, the Dragon Corps pilot metal dragons.   I’ll be the first to admit I don’t get too excited about dragons these days.   In fact, I tend to avoid books featuring dragons, if at all possible.   Too much exposure to Dragonlance and Pern growing up, I suppose.   But metal dragons?   Sign me up.

And it’s for that reason I wish we’d seen more of them — in action during attacks on the Ke-han, in downtime in their hangers, or just interacted with their pilots.   I find the idea of metal dragons animated by magic very interesting, particularly when they seem to develop their own personalities.   We got to see Havemercy through her interactions with Rook and while what glimpses we caught were great, I would have liked to see the other dragons’ too.   Especially when you take into account what happens to them later in the book, as the Ke-han plot becomes clearer — I think there would have been a great opportunity to see the dragons break down and start acting not like themselves at all.

Something that might be of interest to other readers is that the narrative rotates through the first-person point of views of each protagonist.   I don’t mind this stylistic choice, but I know other readers do so I thought it fair to mention.   I will say I was strongly reminded of Sarah Monette’s Doctrine of Labyrinth series, which put this book at a slight disadvantage.   When rotating first person narrations are done well, the different voices can be very striking.   But while I thought Rook had a strong, angry voice, the other characters’ voices weren’t very distinct from one another.

On the other hand, that perception might also stem from the fact that while I found Rook and Thom’s storyline compelling, I didn’t find Roy and Hal’s storyline that interesting.     Don’t get me wrong.   I definitely believe their storyline was necessary for the plot.   I just found it rather bland.   Whenever I reached a Roy or Hal section, I found myself thinking, “When’s the next Rook or Thom?”   I’m sure other readers will feel differently since I think the Roy and Hal storyline is the more romantic of the two, but to be honest, Hal bored me and I thought Royston was at his best when he was maneuvering through the Volstov court.

Rook and Thom, however, I could have read an entire book about.   Their character dynamics, respective backgrounds, and interactions hit all my favorite narrative tropes.   I suppose you could say the revelations that occur later in the book are cliché, but the antagonistic push and pull between them kept me reading.

And speaking of Rook and Thom’s storyline, can I just say I loved the antics of the Dragon Corps?   Make no mistake, I think Rook is an asshole and that the Dragon Corps act like glorified frat boys but I understand where that entitled attitude comes from.     They are Volstov’s elite fighting force and they know it, so Thremedon has become their playground.     After all, who’s going to tell them to stop?   If they get punished the way they deserve, there’d be no more Dragon Corps and then where would Volstov be?

That’s another reason why that storyline was the more interesting to me.   It illustrated how war affected people, both in terms of power and mentally.   For me, the most striking thing was Thom’s observation that the Dragon Corps are like their own contained culture.   This is why they had such a hard time functioning in proper society.   The problem with that?   Once the war is over, rendering the Dragon Corps obsolete, what’s going to happen to them?

For the most part, the war does take place in the background, which will bother some readers.   I did wish the Ke-han plot had been introduced a little earlier.   I liked the first half of the book, but I thought that conspiracy brought an immediacy to the story that wasn’t there before.   On the other hand, I absolutely loved the idea of Thom using the Dragon Corps for his thesis and getting funding for future studies and papers.   How often do we see academia portrayed in traditional fantasy?   Now if we could get some female characters in future books, I’d be all set.   B-

This book can be purchased in hardcover from Amazon (a mass market is not available until July 2009) or ebook format from the Sony Store and other etailers.

→ Jia
Previous article: REVIEW: I Do, Anthology
Next Post: Even Ian McEwan Has Critique Partners