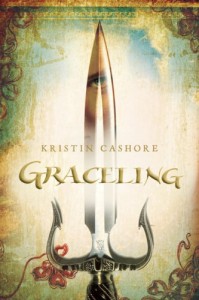 As usual, I’m late to the party.   I meant to review your debut YA fantasy when it first came out but for various reasons, I fell behind.   That said, one reason it took me a bit longer than expected is because I had a difficult time getting into the book.   I’m ultimately glad I kept picking this book up again and again to give it another try but I’ll be honest.   That had more to do with the strength of the premise rather than the strength of the writing itself.

But before I go into that, let’s start at the beginning.   Graceling takes place in a pseudo-medieval fantasy world where certain people are gifted with extreme skills called Graces.   You can tell a person is Graced by their eyes — they don’t match colors.   Graces can take many forms.   For example, a person can be Graced with cooking and work as the palace chef, or with mathematical ability and work as the only female accountant in all the kingdoms, and so on and so on.

Our protagonist, Katsa, is Graced with killing.   Of all the possible Graces to have, this is probably the worst.   Graces like horse handling or gardening are harmless and even useful.   Killing, however is untrustworthy at best and dangerous at worst.   And for this reason, she’s forced to become her uncle, King Randa’s personal thug.   Is there a lord refusing to pay his taxes?   Send Katsa to break his arm.   Is there another lord refusing to give one of his daughters in marriage to a borderlord?   Send Katsa to torture him until one of the daughters break and agrees to marriage in order to save her father. As a result, people fear her and spread hateful stories about her that, unfortunately, are true.

Katsa hates her existence, what her uncle makes her do, and that it effectively reduces her to little more than an animal.   In retaliation, she formed the Council, a multi-country network that helps people in need.   In this way she’s able to make up for the wrongs she’s committed on her uncle’s orders.   During one such Council mission, Katsa rescues the elderly father of a neighboring king.   No one knows why he was kidnapped, but the Council intends to find out.   What they learn is worse than they could have ever imagined.

As I said, it’s the premise that drew me to this book.   A princess who’s preternaturally good at killing people?   Instead of wearing dresses, attending parties, and enjoying the attentions of courting suitors, she’s forced to become her uncle’s personal heavy?   Sounds exciting and fresh!   Which is was why I was surprised to find the first few chapters slow and hard to get into.   It wasn’t a matter of lack of action or plot. There was plenty of that.   I think it simply boiled down to a lack of tension and an odd blandness to Katsa.   I did warm up to Katsa as the book continued on but I was initially unimpressed despite her formidable abilities.

Part of that is my own fault.   With a premise like this, I did come in with preconceived notions. But I also think the only thing that makes Katsa interesting is her Grace.     Her personality itself is not very memorable.   She hates her uncle’s lackey, but why has she never thought of defying him before? She’s a near unstoppable killing machine. What in the world could he do to stop her if she tried? I know she’s young but given the world and set-up, I didn’t completely buy it that the sixteen-year-old Katsa would never think of walking away. There is an underlying thread dealing with her choosing between becoming the good person she wants to be or becoming the wild animal her uncle views her as, but it was overshadowed by this unexplained gap.

This doesn’t mean there aren’t things to like.   There are.   Katsa’s competence in survival and combat situations is refreshing.     Her interactions with Prince Po are delightful, although I thought the romantic plot had some pacing issues towards the middle of the book.   It just didn’t seem well-integrated with the rest of the plot and given what the two of them were pursuing at the time, I couldn’t help but find it out of place and mistimed.   Even so, I think the burgeoning romance between Katsa and Po, and its inherent conflict (no details here because I think knowing ahead of time detracts from the experience) is the strongest aspect of the book.   So strong in fact that I think it can mask some of the book’s weaker points.

And the biggest weak point for me was the antagonist.   I found his ability very creepy and insidious.   I think if it had been left at that, I would have loved him.   But it wasn’t left at that, and the traits tagged on to him reduced what could have been a brilliant antagonist into a cardboard villain.   What do I mean by “tagged?”   I mean, those identifying actions and traits characters are given to tag them as the hero or the villain.   Many readers here are familiar with villains who indulge in skanky sex.   It’s things like that.

In Graceling, the villain maims, tortures, and kills little animals.   Because as we all know, if you kill animals in a book, you are evil. And he doesn’t stop there. He maims, tortures, and kills children as well.   And perhaps “something more” if the child happens to be a girl. Now he’s Evil with a capital E. In fact, his motivation can be reduced to a single sentence. (Spoilers follow for those readers following on the feed.)

Really?   That strikes me as a lot of trouble to go to, so much so that when I finished the book I flipped back to make sure I didn’t miss some crucial detail.

I suppose, given the premise, I was expecting less black and white with regards to the presentation of the villain.   Compared to the conflict between Katsa and Po, it was very two-dimensional and disappointing.   There’s nothing necessarily wrong with extreme presentations of good and evil.   I think those kinds of stories have their place and their readers.   But when your protagonist is pretty grey herself, it’s a little disconcerting to realize the antagonist lacks that same nuance. I find calculating, cold villains more compelling than over-the-top evil and insane ones. Towards the end of the book, I actually felt that Graceling‘s antagonist had become a caricature and wasn’t frightening at all. Other readers may, and probably do, feel differently.

Aside from the Graces, the worldbuilding is nothing spectacular.   I’ve seen it countless times before in many a fantasy novel set in pseudo-medieval Europe.   It didn’t bother me here as much as it usually does, probably because of the presence of the Graces and what they mean for the general population, but readers looking for a more unique fantasy setting won’t find it here.   All things considered, after the glow from Katsa and Po’s relationship — which is truly a delight to read about — wore off, this ended up being a B- for me.

This book can be purchased in mass market from Amazon or Powells or ebook format (Kindle only that I could find).

→ Jia
Previous article: REVIEW: The Frog Princess (Book One of Tales of the Frog Princess) by E.D. Baker
Next Post: eBook Technology Links of the Week