REVIEW & Giveaway: Queen of Song and Souls by CL Wilson

Notes: It is impossible for me to write this review without giving spoilers for the series so if you just want to enter the contest, skip to the comments and tell me your favorite soul mate story. We are giving away five copies of this book (and by we, I mean Dorchester and Dear Author). 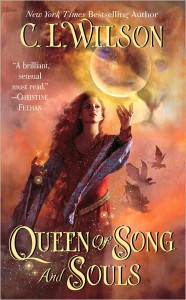 I can see you don’t hesitate in ripping out the reader heart and squeezing it until we are gasping.   This is not a bad thing.      ne thing that sets you apart from other authors (not all but some) is that you are willing to take chances with your characters. Rain and Ellysetta, the main protagonists, remain inviolate. Their love continues to flourish, but war is not without its casualties and the knife of the soulmate can create real tragedy.

Ellysetta Baristani is a Tairen Soul, one of the only female Tairen Souls in the land.   She was found living amongst the humans in Celieria when a dangerous glimpse through time, aided by magic, revealed to Rain, a Tairen Soul and leader of the Fey, that she would somehow help to save his people.   It was discovered that Elly is Rain’s truemate, destined by magic to be his other half.

The Fey people are in decline.   Too few women to be truemates to the men.   Too many men giving up hopes of finding a truemate and dying.   Too few progeny and ultimately, too many enemies.   The Fey are tottering on the edge of extinction and swept up in a true good versus evil battle with the Mages.   The story continues with the increasingly fraught battle between the humans, Mages, Fey, and even an Elf or two.

The Mages, workers of Azhran, a black power, are increasing their control over humans and spreading the mage marks far and wide.   Mage marks are magical marks on a person that puts them nearly completely under the control of the Mage who has marked them.   Through these marks, humans act as puppets for the Mages.

There are humans who are working with the Fey to combat the Mages and their marked humans, but the battle is taking increasing tolls.   I know, because this is a romance, that the Fey will ultimately win out but as I read the series, I begin to wonder at what cost.   Oh, your readership isn’t full of fear at every turn of the page like a George RR Martin reader, but I do confess to trepidation at the end result.

Probably my biggest complaint is that while I do enjoy Rain and Ellysetta, their conflict is the least interesting to me at this point.   Their romance has been consummated and the conflict, both emotional and external, does not really rest with them.   For me, the storyline that continues to have the most power is that of Shan and Elfeya, the birth parents of Ellysetta.

The two are locked in the dungeons of the High Mage.   One cannot live without the other and their love for each actually keeps each other alive when perhaps the truest mercy would be for them both to pass into the spirit world. Instead, they each keep funneling power to the weaker party, helpless to stop themselves because their mate bond means that they must be together.

Queen of Song and Souls also returns to the story of   Adrial vel Arquinas,  and Talisa Barrial. In book one, it was realized that the Fey had mates amongst the Celerians because the Celerians had all descended from Fey some long, long time ago. The problem is that the Celerians were intermarrying with the Elds to form political connections. One recently married Celerian, Talisa, found out that Adrial, a Fey, was her truemate.   Talisa had dreamed of Adrial and refused marriage proposal after marriage proposal and then, when it seemed like she would never meet with Adrial, she agreed to a political marriage.   Just one month after she married, Talisa and Adrial meet.   Talisa had taken her vows and her husband refused to release her.   Talisa initially wishes to leave her husband but her father reminds her of the importance of her marriage and honor is what makes a person worthy of love.   He counsels her to act with honor.

Throughout the book, Rain is called upon to make decisions for the betterment of his people as a whole. He breaks Ellysetta’s heart again and again as his decisions leave some in peril and some in despair.   Ellysetta has to deal with the horror that her existence was brought forth from immense pain and sorrow in order that prophecies may be fulfilled.

I was really impressed with how you’ve taken the soul mate concept and shown that it is not without its consequences and not every truemate instant ends in happiness. I thought the pacing of this book was a bit uneven but it ended with a bang.  I look forward to the conclusion of this high fantasy romance and hope that there will be more to follow. B

This book can be purchased at Amazon. No ebook format that I can find.

→ Jane
Previous article: A Special Guest Post on Cultural Appropriation By Handy Hunter
Next Post: REVIEW: To Desire a Devil by Elizabeth Hoyt