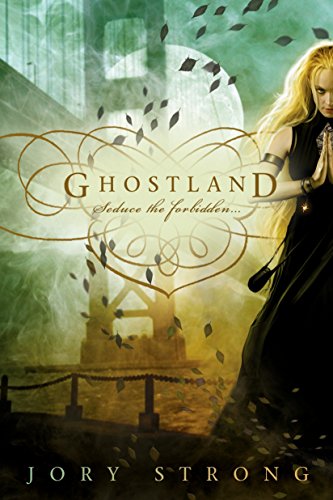 Despite the fact you have a long backlist as an epublished author, I hadn’t read you before. To be honest, I was first intrigued by your book because of your beautiful cover, although, the purse thing? That’s strange. The great thing about Ghostland is that it is a wonderful blend of urban fantasy and romance with the worldbuilding conflict resting on the emotional conflict between the characters. And no, I don’t mean that the world is going to end is the two main protags don’t get together, but rather that what separates the two is based on their cultural divide. Yes, it’s all Capulets and Montagues and hated enemies to lovers.

The world you’ve created was complex and, at times, very confusing. The confusion rests to a large degree on elements that are revealed toward the end and thus while most of the storylines were wrapped up toward the end, it did require the reader to be in the dark on big world building issues. I hope I don’t give too much away in the review. Most of the details are those gleaned in the first few chapters but those that are spoiler averse might want to click away!

The heroine is a shaman. She can enter the ghostlands, an alternate or parallel plane, and whisper the name of a spirit on the spirit winds and summon that spirit to her. Each summons, though, comes with a price. Usually she is careful to call a spirit guide whose price she can pay but sometimes the price is unknown and very dear.

Aisling was left as an infant with a farmer and she grew up on the farm with no formal training as a shamanness. What she does know she has learned through trial and error and through the help of a familiar which attached itself to her at a very early age. The setting is post apocalyptic California and I get the idea that some natives will be amused with the descriptions of Oakland and surrounding areas. In the rural area in which Aisling lives, normal humans look upon the gifted with suspicion and Aisling is used to hiding her true nature.

Somehow, though, word got out that she was a shaman and leaders of the Church come to collect her and bring her to Oakland. There she is given a discrete task. Complete it and she will be given a small house, food and travel vouchers and a tiny bit of money. Fail, and well, there’s no option. Clearly if she fails, she’ll die, not at the hands of the Church but because failing the task means her death.

She is asked to go into ghostland, this other parallel world, and seek out the lover of a powerful man. They want to know if the lover is dead or alive. She enters ghostland and finds the woman, Elena. Elena is about to become a human sacrifice (or at least that is how it appears). Aisling’s familiar travels with her and at the point Aisling will fail in the task, the familiar whispers her the name and she summons the spirit. The spirit turns out to be a demon and while the demon slays the ones engaging in the sacrifice, it vows to kill Aisling for summoning him.

The demon is the Prince of Serpents, a Djinn, and few people can summon one such as powerful as he. He seeks vengeance upon her but also answers. How is it that she can summon him? What power does she hold? He goes to the house of raven and the house of spiders and the two leaders tell him that if he takes on a task for them, he can have the answer he seeks.

So he agrees to find a tablet that might hold the secret to the ifrit- Djinn whose souls are tainted and cannot be brought into the spirit land for rebirth. Ifrit are demons totally lost. Powerful, important and well loved demons have been lost for years and the djinn seek to reclaim them.

In order for a chance to get out of Oakland and save her family, Aisling agrees to hunt the makers of “Ghost”, a drug that has been created that opens a portal between the ghostland and the mortal world. A drug that placed Elena in peril.

The search for the tablet and Aisling’s promise to find the makers of Ghost coincide and the demon, Zurael, can’t exact his vengeance until the tablet is found for Aisling is the key to finding it so he must protect her, find the tablet and then destroy her.

The world is fairly complicated and I’m not sure I understand how it all works but the Djinn lived on the mortal plane until an alien god came and gave the power of summoning to the mortals. Mortals began to enslave the Djinn so they left and made a new home in ghostland.

The romance between Aisling and Zurael occurred naturally and was well integrated into the urban fantasy based story. Aisling was a natural enemy of the Djinn. She could not be brought into the spiritworld to live with Zurael nor would she want to. Zurael’s people believe that someone with such great power as Aisling who can summon and bind a Djinn cannot be allowed to live.

As an aside, because I have seen some comments about the sensuality level of this book, I’ll address it briefly. Yes, there was explicit language used in regards to the sex scenes and yes, there are several sex scenes in the story. I thought that the sex scenes lacked the lyrical quality of the other parts of the narration and I could see how some would find them jarring, not because of the use of coarser terms, but they did read differently, as if they were written at a separate time than the rest of the book and then inserted. However, I felt that the sex scenes were appropriately placed and advanced the storyline and the relationship and they weren’t at all gratuitous.

Aisling is truly powerful but her power isn’t well harnessed. She relies a great deal on her familiar. Part of the story relies a great deal on Aisling completing spirit related tasks for differing individuals and it’s so convenient that the payment she receives in return comes to help her later in the story. The conveniences and the confusion of the worldbuilding is what rates this a lower grade for me but it is still a compelling read and I am anxious to see what is next. B

→ Jane
Previous article: REVIEW: Purge by Sarah Littman
Next Post: Authors Guild Vies for Worst Publicity of 2009 (and other news)