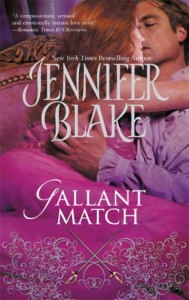 Last year I enjoyed another in your “Masters at Arms” series so when the arc arrived for “Gallant Match,” I made sure to make room for it on my reading schedule. Once again we’re back in second quarter 19th century New Orleans (May 1846 to be precise) but this time with an added bonus trip to Vera Cruz, Mexico.

Sonia Bonneval catches only a glimpse of the tall man who’s arrived to speak with her father but somehow she knows he’s trouble. He looks to be one of those uncouth Americans from the frontier – a Kaintuck. So she decides to stress the style of the women of New Orleans to wear face paint since she thinks it would disgust the boorish clod she imagines him to be. She’s got to get him to turn down the job her father is offering. That way she can avoid the planned marriage and flee to her grandmother in Mobile.

Kerr Wallace wouldn’t care if Sonia did back flips down the Passage de la Bourse in her shimmy. Through her he’s finally got a line on the man he’s been hunting for four years: the man responsible for the death of Kerr’s younger brother. Rouillard might have evaded justice this long but Kerr intends to see him dead. The idea that he’s delivering this young woman into the hands of a coward gives him slight pause but Kerr figures she’ll be a rich widow soon enough. What neither counts on is how some gun running and a declaration of war will interrupt their plans.

Readers looking for American set historicals generally have to hunt a long time. And what they usually find are Westerns. Now I love a good Western but if an author can deliver something else, I’m happier than a clam at high tide. With the “Masters at Arms” series, you deliver. We’ve got maitre d’armes heroes and – in the two books I’ve read – heroines who aren’t shy, shrinking violets.

Sonia remembers Rouillard from her childhood and nothing she remembers is good. Thus I’m more willing to watch her try and escape the fate her father has planned for her than if she were just in a snit over nothing. Why would her father be willing to hand her over? As Sonia’s Tante Lilly reminds her, men make the decisions and women have to try and work within them to the best of their ability. Maybe one day life for women will be different but arranged marriages, made for family and business purposes, are still the norm in Creole society.

Kerr has been hunting Rouillard ever since the end of the disastrous Mier Expedition. Delivering Rouillard’s bride to him in Vera Cruz will provide the chance Kerr’s been waiting for. None of Sonia’s slippery tricks will be allowed to work, even if Kerr finds himself admiring her spirit and inventiveness. I like that Kerr doesn’t stoop to taking out his revenge on Sonia. I’ve had enough of “heroes” using innocent women that way.

The first half of the book delivers your characters to their departure for Mexico. And up to then as far as the plot is concerned, it’s a fairly standard historical. It’s when the steam packet journey down the Mississippi River and across the Gulf of Mexico begins that things really pick up. Though your descriptions, I could see the flora and fauna that slip by as the Lime Rock cruises down to the Gulf. The different passengers on board delineate the strata of society and our characters’ place in it. The horror of the attack by the Mexican gunboat shows that human nature, in the face of a sinking ship, hasn’t changed much.

The two day journey through the jungle Sonia and Kerr undertake after swimming ashore makes me thankful for modern insect repellent and that scorpions aren’t common in my part of the world. Though I would like a glimpse of a disdainful jaguar as he saunters through his domain. I’ve heard that Mexican hospitality is among the best in the world as Sonia and Kerr discover, even if Kerr has to dodge the admiring widow Dona Francesca. And if I could make the journey down to Vera Cruz in something more comfortable than a diligence, your descriptions of the beauty of the countryside make me want to try it.

Though I expected Sonia and Kerr to do the dirty before arriving at Rouillard’s home, at least you provide a raison d’Ãªtre that fits with the story rather than the standard “I want one night of hot lurve to last me a lifetime!” that most heroines wail as their excuse while they rip off their corset covers.

Rouillard is the villain you’ve made him out to be through the entire book. No revelations here though he is deliciously evil and cowardly. One character did surprise me. I think you did a great job of concealing his true intentions. One thing did disappoint me and that is for a book about a master swordsman, there’s very little actual sword play. I guess Kerr couldn’t challenge the jaguar to a duel, especially as Kerr had lost his sword cane when the ship went down, but the fencing loving wench in me is always panting for “more, more, more!”

I see there’s at least one more book in this series, though I’ll have to wait until next February for it. [Pout] In the meantime, thanks for continuing to write close to home and offering alternatives to the standard fare. B-