Readers: If you are bothered by period nomenclature (Japs, Krauts, wetbacks), I would advise you to read this book with caution. 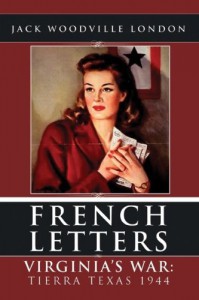 I am so glad that someone from Vire Press contacted Dear Author about reading this book. As one of the blurbs printed in the front said, I was hooked from the prologue. This is one version of “the homefront” that I’ve never seen before.

You drop us straight in on the action. Doc Hastings has died and there is a scene at his funeral that somehow dates back to his time of service in France during WWII. But instead of then starting the story with a scene between Will and Virginia, what comes next is something that was probably played out in countless towns across America then: a group of young boys playing at soldier. Until one gets hurt, is taken to the town doctor/quack and overhears doc telling someone that Virginia Sullivan is “knocked up.”

As he ponders what the term means – he’s only 12 – I start to wonder more and more about this town and its people. Who is Virginia? Who knocked her up? Who is the man doc told about her condition? Who are these boys in this small Texas town?

You take us along, leading us down the path of the tale, slowly introducing more and more of the people here and telling us who they are and what they do. As this happens, small town life in rural Texas during the war comes into focus as clear as if I were standing there and watching it all. Some of the townspeople are kind and helpful. Others are mean as snakes, including Virginia’s brother, and others are thick as thieves as they run the black market in town.

It turns out that the man doc told is Poppy Sullivan, Virginia’s father, who then cooks up a scheme – without telling her – to print an announcement of her elopement months before to a young man now in the army as a doctor. Only by book’s end, Will still hasn’t learned he’s married as Virginia’s SOB brother – and the town’s postman, has kept all Will’s letters from his sister. It’s not all Bart does but like the other do-wrongers in town, comeuppance is just around the corner and you deliver it sweetly and neatly.

However, the book ends with several unresolved issues – not unexpected since this is the first in a trilogy – including the continuing saga of another young soldier and the woman who’d spurned him for years. Well, suffice it to say the small town gossips are setting the grapevine on fire wondering where they were all night. And where’s Poppy and corrupt Sheriff Hoskins? And the town quack? And…and…I’m salivating to find out “what happens next.” B+