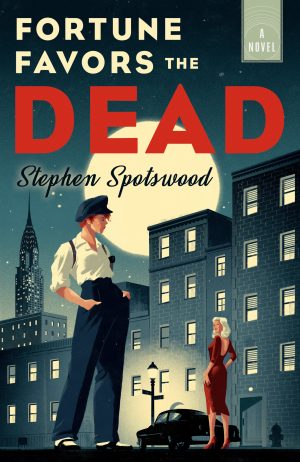 Introducing Pentecost and Parker, two unconventional female detectives who couldn’t care less about playing by the rules, in their cases and in their lives.

It’s 1942 and Willowjean “Will” Parker is a scrappy circus runaway whose knife-throwing skills have just saved the life of New York’s best, and most unorthodox, private investigator, Lillian Pentecost. When the dapper detective summons Will a few days later, she doesn’t expect to be offered a life-changing proposition: Lillian’s multiple sclerosis means she can’t keep up with her old case load alone, so she wants to hire Will to be her right-hand woman. In return, Will will receive a salary, room and board, and training in Lillian’s very particular art of investigation.

Three years later, Will and Lillian are on the Collins case: Abigail Collins was found bludgeoned to death with a crystal ball following a big, boozy Halloween party at her home–her body slumped in the same chair where her steel magnate husband shot himself the year before. With rumors flying that Abigail was bumped off by the vengeful spirit of her husband (who else could have gotten inside the locked room?), the family has tasked the detectives with finding answers where the police have failed. But that’s easier said than done in a case that involves messages from the dead, a seductive spiritualist, and Becca Collins–the beautiful daughter of the deceased, who Will quickly starts falling for. When Will and Becca’s relationship dances beyond the professional, Will finds herself in dangerous territory, and discovers she may have become the murderer’s next target.

A wildly charming and fast-paced mystery written with all the panache of 1940s New York, Fortune Favors the Dead is a fresh homage to Holmes and Watson reads like the best of Dashiell Hammett and introduces an audacious detective duo for the ages.

I stumbled on this mystery when browsing Good reads. I am a huge fan of Nero Wolfe and Archie Goodwin mysteries and the time period was close enough so I got the book despite the crazy price which Big publishers use on most books they put out and I really liked it. I do recommend it to fans of Nero Wolfe and Archie Goodwin, or if you just like noir mysteries. Lilian Pentecost and Will Parker are not carbon copies of Wolfe and Goodwin at all. The only similarities are that Lilian is a private detective and Will is her sidekick and assistant and somebody who will eventually take over the business because Lilian has multiple sclerosis. She is still able to do her work, but she has days when she is not feeling well and that is the reason why she offered Will the position.

Basically the blurb gives a perfect set up. It sounded right up my alley but I did not expect to enjoy Will’s voice as much as I did. I loved everything – pacing, humor, period flavor. This is how Will describes her initial training:

“In short, I became the circus’s jack-of-all-trades—able to assist just about any of the talent and filling in when necessary. Never stopped having to pad the bustier, though. That’s where I was when my life intersected with Lillian Pentecost. The day after I accepted her offer, I began the next leg of my odd education.

She said in her pitch that she’d foot the bill for any training, and she was as good as her word. Over the next three years, I took classes in stenography, bookkeeping, law, target shooting, auto mechanics, and driving, among a host of other things. She even pulled some strings to mock me up a birth certificate, making me legally Willowjean Parker. With that bit of forgery in hand I was able to get a driver’s license, a private investigator’s license, and a permit to carry a pistol.”

As the blurb tells you, after describing Will’s and Lilian’s initial dramatic meeting, story jumps three years ahead and Will is describing the investigation of the Collins case . The rich businessman allegedly took his own life and now his wife is killed (and maybe by the spirit of her husband).

Ms. Pentecost may not have been initially too eager to take another case for the rich and powerful, but in order to be able to help her poorer clients she has to at times take cases that are good for their bank account, too.

“When I finished, she took a full two seconds before asking, “Is there any reason to consider taking this case other than the clients’ bank account?” “Their bank account is nothing to sneeze at,” I told her. “At least according to the latest stock prices in the Journal. But if filthy lucre doesn’t interest you, there’s also the fact that it’s an honest-to-God locked-room mystery. A locked-room mystery! How often do you get one of those?” “I don’t have the same fascination with pulp conceits as you.”

The case quickly becomes a wild ride for so many reasons and I enjoyed every second of it. I like that Will describes not only her strengths but also missteps she makes during the case and she is quiet honest with her audience. Lilian Pentecost relies on Will very often and did I mention that Will manages to insert humor in her narration as well when possible?

“You’re right,” Ms. Pentecost said. “However, that does not mean you shouldn’t keep your eyes and ears open on Friday. Perhaps inquire about warrants and just what questions the police have asked and see who reacts and how.” “Got it,” I said. “Ask questions. Get answers. Pay attention. I might even remember to bring a pencil and paper so I can write things down.” My sarcasm went unremarked. “Now, if our schedule is free, I’d like to grab lunch out and take a tour of some newspaper offices. See if there’s anything that wasn’t fit to print but which might be fit for us.”

There are some romantic attempts in the book – blurb mentions that Will starts falling for the daughter of the victims for example. I just want to suggest to not expect an actual romance – there is nothing tragic happening between them, but while this storyline is significant, it does not have much page space and it does NOT develop into Romance, or at least not yet.

→ Sirius
Previous article: REVIEW: That Thing about Bollywood by Supriya Kelkar
Next Post: REVIEW: Why Peacocks by Sean Flynn