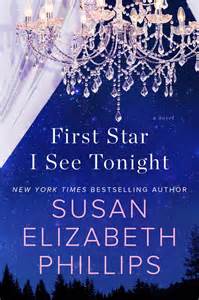 My book log tells me I haven’t read one of your novels in a while – the last one I read was in 2010, Call Me Irresistible. I ended up giving it a B+ but noting in the log that it had some of the elements I sometimes found aggravating in your books. Since I didn’t remember it at all, I refreshed my memory, and it came back to me – small town Texas, very over-the-top characterizations and actions, busybody locals that I think I was supposed to find charming but kind of hated (but it was still compelling enough for a B+!).

Anyway, I’m on a mini (very mini) kick of picking up contemporaries from authors I haven’t read in a while, so I requested this, the latest book in your Chicago Stars series.

Cooper Graham has the world at his feet. A former Oklahoma farm boy, he rose to become an MVP and Super Bowl winning quarterback for the Chicago Stars. Now he’s into the first year of his retirement, and he has big plans to recreate himself as a successful businessman. Step one is opening the hottest new club in Chicago, Spiral.

Piper Dove is also attempting to get a business off the ground, but she’s starting a lot lower than Cooper and having a lot less success. Piper has sunk all her money into buying her late father’s private detective agency from her avaricious stepmother. Now she has all of her potential success riding on her investigation of Cooper Graham, an investigation she’s undertaken at the behest of a prospective investor in Graham’s plans to franchise his nightclubs, Deirdre Joss. To that end, Piper trails Cooper in a variety of absurd disguises, in an effort to see where he goes, what he does, and whether he’s a safe bet for Joss Investments.

Unfortunately, Cooper makes Piper pretty early on and eventually, when she gets into his nightclub (after several attempts; she’s not considered hot enough for the doorman) he confronts her. Piper decides to affect a fairly ridiculous accent and persona in an effort to convince Cooper that she’s a harmless stalker who is undone by her love for him, but he doesn’t need to worry because her new medication will kick in soon and she’ll be out of his hair (as I write this it seems kind of offensive that the notion of mentally ill stalkers is played for laughs, but maybe I’m being too sensitive).

I really didn’t like the beginning of this book; the characters are broadly drawn and annoying. Cooper is repeatedly described as someone who can’t stand to lose, which is very far from my favorite type of personality, IRL or in fiction. Piper comes off as incompetent and ditzy. Luckily, after a rocky beginning, both of them settle in and begin to display more depth and appealing characteristics.

Once Cooper realizes that Piper is a private detective, he’s determined to find out who she’s working for. Piper, citing professional ethics, refuses to tell Cooper anything, even after he threatens to sue her. She does share some observations from her time in his club, telling him that a bartender (and close friend of Cooper’s) is cheating him. Cooper is disbelieving and enraged, but when he confirms that the bartender/friend is indeed skimming, he comes back to Piper with a job offer: come into the club undercover and clean up the staff. Piper, who has very little else in the way of professional prospects, and who has already subletted her condo and is planning on moving into her cousin’s basement (a much dreaded undertaking fueled by desperation), takes the job offer, which comes with a small apartment above the club.

Cooper and Piper fall into a very typical SEP relationship, full of wisecracking and semi-contentious flirting. On the one hand, Piper knows that Cooper – gorgeous, rich and famous – is out of her league. On the other hand, she has a history of attracting guys who see her as a challenge, precisely because she’s not the typically clingy, needy type. Even if that characterization doesn’t do any favors to womanhood in general, I kind of liked this about her – she is definitely “one of the guys” (again, not my favorite trope) and not very girly, but she’s also not entirely unaware of her appeal.

For Cooper’s part, he decides he’s going to seduce Piper once their professional relationship is over. Sure, she’s not his usual type (brainy, gorgeous supermodels and movie stars…ohwaitdidmyeyesjustrollbackinmyhead?), but she appeals to him, and he thinks they could have fun. He’s not thinking long-term, but then, neither is Piper (another refreshing aspect, I thought).

Both Cooper and Piper (the identical second syllable of their names is starting to weird me out – Cooper-Piper, Cooper-Piper, Coo…okay, I’ll stop) had rough childhoods. He grew up motherless with a kindly but reclusive PTSD-suffering Vietnam vet father on a ranch in Oklahoma. Piper’s mother was murdered in a robbery when she was very young, and for the rest of her childhood her private-detective father managed to be a toxic combination of overprotective and bullying, insisting that his daughter had to be tough and wasn’t ever allowed to cry, but also that she wasn’t strong enough to take over his business. I kind of hated Piper’s father, who dies before the story begins. I felt like the book could have acknowledged a little more explicitly that for all that Piper loved him, he was a terrible, terrible parent. (To be fair, Cooper has thoughts along these lines, and the very fact that Piper is so screwed up in some ways is clearly due to his parenting, but I felt like she had been damaged to the degree that maybe some mention of therapy was in order.)

There are a number of subplots, ranging from wacky (Piper’s elderly neighbor is sure she’s seen her late husband wandering downtown Chicago in a Green Bay Packers cheesehead, and she wants Piper to investigate) to less wacky (someone seems to be trying to sabotage Coop’s business and possibly even harm him). The latter serves as another plot device to keep Coop and Piper together, as she goes into protective bodyguard mode (which is supposed to be funny I guess because he’s a big strong athlete and she’s just a woman).

Another device that brings them together (but made me a bit queasy) is a subplot in which Piper ends up helping a teenage Middle Eastern girl escape from what amounts to indentured servitude bordering on slavery. While Piper and Cooper work nicely together to rescue the girl and settle her with a relative in Canada, the stereotypically villainous Middle Eastern prince featured in this part of the story felt a little yucky. I mean, on the one hand, yes, such situations do occur in real life, but on the other hand, having two white people play the saviors against the evil brown people was something I could’ve done without.

But really, I’m complaining too much because for all of my nitpicking, once the book got rolling, First Star I See Tonight was surprisingly fun. As I said, the characters had unexpected depth (Coop is an urban gardener, for instance) and their romance ended up being romantic, in part because both of them are so tough and not-romantic; it was nice to see them fall in love almost in spite of themselves. The story was very readable and the solution to the mysterious attacks on Cooper surprised me. I was going to give this a B, but seeing as I gave Call Me Irresistible a B+, and I’m pretty sure I liked First Star I See Tonight better, I’ll give this one a B+ as well.