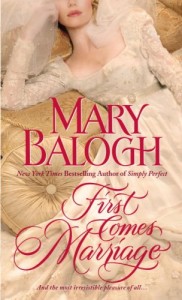 I’ve read you intermittently for maybe fifteen years.   Some of the books you’ve written I’ve adored and re-read dozens of times.   For some of your out of print books, I’ve paid outrageous sums of money.   Some of the books, though, I’ve found a bit tedious.   First Comes Marriage falls on the high end of the spectrum.    While not perfect, this marriage of convenience story was a  great start to a new series.

Elliot Wallace, Viscount Lyngate,  travels to the village of Throckbridge in Shropshire to find the Huxtable boy and inform him that he is now the Earl of Merton and in possession of a huge fortune. He’d like to capture the boy and get back to London to find the bride that he had promised his grandfather he’d acquire by the age of 30 which is now upon him. The last thing he wants to do is spend time in this tiny village, attending dated village soirees, and engaging in decidedly boring village conversation.

The Huxtable family, however, won’t let Stephen go with a quick pat on the back. The four have been barely surviving in genteel poverty for some time and Stephen refuses to leave without them and his sisters refuse to let him go. Vanessa, the middle girl, was the plain one of a family of jewels. Margaret, the eldest was impossibly voluptuous and a “rare beauty”. Katherine was the youngest girl–tall, slender, willowy, and beautiful. Stephen Huxtable was the baby of the family and possible more beautiful than all of his sisters, with pure golden hair and light blue eyes. The family looks are important and not just to set up the sequels which these characters so clearly signal, but because Vanessa’s “plainness” has been drummed into her by careless comments here and there.

None of her family had ever called her ugly-‘they loved her. But she had been her father’s favorite because she was willing to curl up in his study, reading, while he worked. And he had often told her that reading was a pastime she should continue to cultivate since it was very possible she would never have a home of her own to run. It was a roundabout way of telling her that she could never expect to marry. … Her parents had felt a special tenderness for their plain Jane-‘her father had sometimes called her that with a fondness that had taken any sting out of the words.

We are led to believe that these constant but well meaning put downs had no effect on Vanessa but her cheerful mien, her desire to make everyone happy was like a clown’s face, hiding deep and unacknowledged pain. Elliot’s path is more recognizable.   His father had recently passed away, his grandfather is pressuring him to marry, and he found out something that really shook the core of his foundation regarding his father.   Elliot’s guiding principle is duty. It’s his duty to fetch the new Earl of Merton; it’s his duty to prepare Merton for society; it’s his duty to become married.

All of these duties seem to be easily disposed of by marrying one of the Huxtable girls. The eldest is gorgeous and while Elliot doesn’t really know her, she seems dutiful enough. Yet, Margaret has a torch for someone else and so Vanessa offers herself up and Elliot decides that duty requires of him to take on Vanessa instead of dashing Margaret’s hopes for a love match. (No one seems it prudent to consult Margaret).

Janine mentioned the effect of the unreliable narrator in The Better to Hold You review. While this story is not told in the first person, the characters often given to inaccurate assumptions about others, some the readers can guess at and others which remain hidden. The unreliable narrator gives flavor to the characters because both Elliot and Vanessa are know-it-alls in their own way.

I did see some similarities between Pride and Prejudice here. I’m not sure whether I was reaching for this comparison or whether it was intentional.   Elliot played the insufferable aristocrat looking down his patrician nose at everyone in the backwater village and Vanessa was the sharp tongued, not very beautiful middle sister, who thought that Elliot was overly stuffy and without humor.   (I thought that the Elliot and Nessie pairing was an unfortunate coupling of names which reminded me often of Elliot Ness).   Elliot’s character arc is based on him not being such a prig ala Darcy.

There are a host of characters in the book and the flaws come from much of the book setting up sequels.   In fact, the very opening of the book started with Constantine, who but for a few weeks mistake, would have been the Earl of Merton instead of Stephen.   I found the focus on the various other characters and their drama a bit irritating even thought they were emotive.

I thought Nessie’s characters were fairly unique for a heroine.   In another book, she’d be characterized, perhpas as a bit irritating social climber.   For example, she is given to superlatives, everything is the best thing ever.

"Oh, Elliott," Vanessa said, holding tightly to his arm, "have you ever seen anything lovelier?"

Vanessa and her superlatives! Nothing was ever just simply lovely or delicious or enjoyable.

But the way that it is presented, I foud   it totally endearing.   Vanessa was also relentessly cheerful.   She tries to be happy even when she’s not.   She tries to make everyone around her happy even when they don’t want to be.   It was her greatest trait perhaps and her greatest weakness.   I couldn’t decide whether she was too much the martyr at times; whether she was too giving.

First Comes Marriage is my favorite kind of romance.   It’s all about watching two people who seem like polar opposites fall in love with each other.   As a reader, I observed the hero and heroine start out disliking each other, actively, to growing to admire each other to finally realizing that the other was as necessary as breathing.   B