REVIEW: Finnikin of the Rock by Melina Marchetta 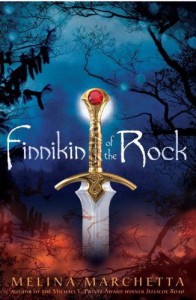 2006’s Jellicoe Road, which I reviewed here, was one of my absolute favorite books read last year. When I heard you were about to publish another book, this time, a YA fantasy titled Finnikin of the Rock, I requested an ARC of the book and was thrilled when one showed up in my mailbox.

Perhaps partly because of my high expectations, I did not love Finnikin of the Rock the same way I adore Jellicoe Road, but I did enjoy the book and I do recommend it to readers, albeit with some caveats.

Set in a land called Skuldenore, the novel is about the people of Lumatere, one of Skuldenore’s kingdoms. The book begins with a prologue in which a twelve year old boy named Finnikin dreams that he is to sacrifice a pound of flesh to save the royal house of Lumatere.

Finnikin is the son of Trevanion, the captain of the king’s guard. His best friends are Balthazar, the heir to the kingdom, and Lucian, a cousin of Balthazar’s. When Finnikin tells Balthazar and Lucian of his dream, the boys make a pledge, a blood oath, to protect the royal house of Lumatere in different ways.

But then come what Lumaterans call the five days of the unspeakable. The king, the queen, and the four princesses are murdered. Balthazar, the only remaining member of the Royal House, is seen escaping through the forest, but he cannot be found. Infighting over who is to blame breaks out. The king’s cousin and his men enter Lumatere from the neighboring kingdom of Charyn in order to take control of Lumatere.

When Trevanion, Finnikin’s father, refuses to kneel before the new king, whom he views as an impostor, his wife, Finnikin’s gentle, pregnant stepmother Beatriss, is tortured. Realizing that his son will be next, Trevanion confesses to treason in order to save Finnikin. Trevanion is then imprisoned outside the kingdom, while his wife dies in childbirth, her baby stillborn.

The impostor king’s men burn Lumatere’s forest dwellers’ homes and then get ready to burn Serannona, the forest-dwelling holy woman, at the stake. But Serannona cries out a curse, one that causes an earthquake, and as some of the Lumaterans escape the kingdom, Finnikin among them, the curse seals the rest within the kingdom’s walls.

All this is summarized within the first few pages of the prologue. The book’s first chapter begins ten years later. Finnikin is now in his early twenties, and he travels with Sir Topher, the king’s first man. He has been with Sir Topher since the curse entombed Lumatere and turned so many of its people into exiles.

Now Finnikin and Topher journey from kingdom to kingdom, trying to improve the circumstances of their countrymen. They visit royal courts, pleading on behalf of Lumaterans living in refugee camps, and they visit those camps as well, trying to keep a record of the dead in a book that Finnikin carries with him.

During the course of their journeys, Sir Topher has become a second father to Finnikin, and Finnikin has learned many languages as well as fighting techniques. Finnikin believes they should petition one of the other kingdoms to give them a parcel of land in which the Lumateran exiles now scattered in different kingdoms can settle.

But one night, while Finnikin is sleeping in an exiles’ camp, the name of his childhood friend Balthazar is whispered in his ear, along with the name of a place, the cloister of Sendecane. And Finnikin starts to believe that the heir to the kingdom has survived in hiding, and might, perhaps, be restored to Lumatere’s throne if the curse can somehow be lifted.

Finnikin and Sir Topher travel to the cloister, scaling a high cliff to reach it. Yet when they arrive, the high priestess thinks they have come for a girl. Finnikin is furious with himself for believing he would see Balthazar again, for allowing himself to hope. And he is therefore also angry at the girl the high priestess gives into his and Sir Topher’s care — a simpleminded Lumateran girl named Evanjalin.

Evajalin, the high priestess explains, lost her family in the kingdom of Sarnak. She has lived in the cloister as a novice for two years, and has shorn her hair and taken a vow of silence. The high priestess believes that Balthazar has spoken to Evanjalin in her dreams, that Evanjalin is intended to marry the future king, and that the girl’s message to the priestess, Finnikin’s name, means that Balthazar has chosen Finnikin to lead the Lumaterans home.

Finnikin believes none of it, but Sir Topher overrules him and the two men take Evanjalin with them. As they leave the cloister, Finnikin sees Evanjalin’s vulnerable demeanor disappear and a triumphant expression cross her face. In the days that follow, it becomes clear that Evanjalin isn’t the simpleton she first appeared to be. She can fight to defend herself, she can speak, sometimes scathingly, and she can insist on guiding their journey through Skuldenore.

She can also demand what Finnikin fears most — that he give up his dream of finding a new land for the Lumateran exiles, and dream of something greater: of the heir’s return to lift the curse and reunite the Lumaterans in their own beloved kingdom.

Is Evanjalin telling the truth when she says that a mystical power allows her to visit the dreams of those trapped inside Lumatere? Is she to be trusted, or will she betray Sir Topher and Finnikin? And how is it that Finnikin, whose loyalty to the people of Lumatere and his childhood friend Balthazar is paramount, finds himself attracted to this fierce girl who is destined to be Balthazar’s bride?

Finnikin of the Rock is prefaced by a poem written by Holocaust survivor Primo Levi, and on one level, the book can be read as an allegory, with the Lumaterans standing in for oppressed and displaced peoples. But on another level, the story also works as a quest fantasy, and uses the fantasy genre trope of a group traveling through foreign lands on a mission.

Along their way, Finnikin, Sir Topher and Evanjalin pick up a teenaged thief who was orphaned during his exile from Lumatere, and several other Lumaterans as well, some of whom they have long missed. The group encounters a variety of dangers and adventures, and camaraderie develops among them.

Finnikin is both strong and sensitive; he is also honorable, idealistic and pragmatic. He has great empathy toward the Lumateran exiles and wants to find a home for them, but he is afraid to believe that that home can be found in Lumatere itself, and thinks it is more realistic to try to find a new homeland.

Evanjalin has an indomitable will, though, and she will not give up the dream of restoring Lumatere to the refugees and reuniting all its people. She too, is pragmatic, but in a different, more ruthless way — she will do whatever needs doing to fulfill her vision.

The physical and emotional pull Finnikin feels toward Evanjalin is in conflict with his honor, not only because she is intended for Balthazar, but because he feels guilty for dreaming, as a child, of someday being king himself. I understood why he feared allowing himself to love Evanjalin, when, if her story was true, it meant that she would never be his, and if it was a lie, she was raising his hopes for Lumatere only to dash them.

There were many exciting parts of this story and I especially enjoyed the adventures and the reunions between exiles who had long been separated from one another. It was moving to see people regain their hope, too. There was also some nice dialogue, such as this exchange between Finnikin and Evanjalin, in which Finnikin discovers that Evanjalin knows the Osterian language:

“Why is it that you choose silence, Evajalin?” he said. “Something to hide?”

Her eyes met his. “Why speak when I can respond to your whistle like a dog?”

He gave a humorless laugh. There was nothing simple about this one.

“And anyway, I was so enjoying the discussions about fragile Lady Zarah.”

He and Sir Topher had discussed Lord Tascan’s daughter in Osterian. Finnikin’s eyes narrowed as he tried to bite back his anger. What they didn’t know about this girl could fill the Book of Lumatere.

“Is that jealousy I hear in your voice?” he asked.

“Jealousy? Of a vacuous member of the nobility who trills like a bird, according to Sir Topher?”

“Your voice could do with a bit more of a trill,” he said.

“Really? Because yours could do with a bit more refinement. For someone who’s supposed to be the future king’s First Man, you sound like a fishmonger.”

“First,” he seethed, “I belong to the future King’s Guard and second, my father was the son of a fishmonger, so I would choose my insults more carefully if I were you.”

Evnajalin returned to the task with the pheasant as if Finnikin were no longer there.

“You have a very dark heart,” he accused.

“It’s good of you to recognize, Finnikin,” she said without looking up. “There’s hope for you yet.”

I did, however, feel that the book has some problems. There were parts of the story I would have loved to see developed more. Perhaps because I also guessed what was going on with Evanjalin very early on, I felt impatient for the other characters to catch on. A conflict between Evanjalin and Finnikin late in the book seemed a bit contrived, and I wanted more romantic moments than there were. At times I felt that the melancholy feel of the book’s early sections didn’t completely fit with the adventure and romance elements of the later sections.

Still, I recommend Finnikin of the Rock overall because the characters were memorable, interesting, and worth rooting for, because Evanjalin was out of the usual mold for a main character, because the dynamics of the relationships were intriguing, because of some plot twists which I can’t reveal, and because in its final third, the book became difficult to put down and kept me reading long past my bedtime.

Finnikin of the Rock is narrated in third person from several POVs, but we never get Evanjalin’s viewpoint, and I closed it feeling that if you were to write a sequel, especially one that focuses on Evanjalin and her past experiences as well as her future ones, I would want to read it. For this reason and for the reasons mentioned above, Finnikin of the Rock earns a B- from me.

(affiliate link). This book does not appear to be in ebook format.