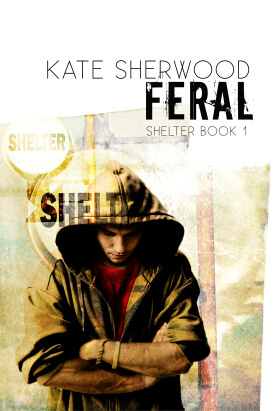 Noah Reed has his life planned out. There was that one glitch, years ago, but he’s back on track now and determined to reach his goal of becoming a veterinarian and building his own practice.

Shane Black’s hard life has taught him there’s no point in looking forward and even less in looking back. He takes life as it comes, and his only real need is medical care for his young pup, Dodger.

When Shane stumbles into the clinic where Noah volunteers, Noah’s instincts tell him to run away from the dangerous, unpredictable ruffian. But the puppy needs help, and maybe Shane does, too.

The young men soon discover that Dodger was poisoned, and so were several street people Shane knows. As they search for the source of the poison, Noah learns about the dark underside of the city where he’s spent his whole life, and Shane learns that there is light in the world, even when he’s stuck in the shadows.

But when their relationship begins to grow from a partnership to a romance, new challenges appear. Their worlds are so different—can they ever make sense together? Is there any room in Noah’s carefully planned life for someone as unpredictable as Shane?

Dear Kate Sherwood, I picked up this book just because I missed your writing, and I really liked it. As the blurb states, Shane and Noah meet when Shane overcomes his natural mistrust and goes into the veterinarian clinic to ask for help for his puppy, Dodger. Shane pretty much lives on the street, and Noah is a young man who volunteers in the clinic. This book could probably be classified as New Adult, since the guys are twenty/twenty one. I am estimating because Noah is a junior in college and at some point Noah guesses that Shane is around twenty as well, so if you don’t like New Adult this book would probably not be your thing. M/M has been doing New Adult for a long time – I am not completely qualified to say that it has been doing it longer than het romance, but I have been reading m/m for more than nine years and the vast majority of the protagonists have been in their twenties since I started reading it.

What I am trying to say is that I would actually cheer the fact that at least some books feature guys in their thirties and forties, and while I do not mind twenty year olds as stars in m/m romances, I am not actively seeking them out anymore. In other words, I was not bound to like this book based on the age of the protagonists alone.

The owner of the animal clinic and her wife offer Shane and Noah jobs. Partly because they want to help Shane, but also because they want to do community outreach – they want the clinic to help pets whose owners cannot afford to pay, and they also hope to bring social workers to the clinic to help some owners of the pets to take advantage of the programs for the homeless, such as subsidized housing. They want Shane and Noah to go out into the community and tell people about the clinic and maybe convince them to try it as a start, to tell them their pets can get vaccinations and check-ups and so forth.

Many of the people Shane knows are naturally mistrustful of the system because they have been burned before, and nobody is more mistrustful than Shane – he had to overcome all kinds of hesitation before he would agree, first to provide overnight help with the animals and then when to accept the outreach job. Initially, Shane does not trust the veterinarian much, he does not trust the police, and it is all very understandable. Shane had it rough and he is convinced that everything is going to go bad for him eventually. But I was so pleased to see how he worked through at least some of his hesitations and fears, although he does not become super trusting by the end of the story. After all, it takes place over only one week, but one can see that there is a chance that he can travel down the road toward a better future for him. I really liked this character, so much.

Part of the reason why Shane was able to start on that road was because of Noah. Noah does not *save* him from anything, but several times his optimism and support help Shane to make better decision for himself and his puppy. Noah also grows and learns a lot during this book – he is a dedicated guy who had wanted to become a veterinarian since he was a child, and he started on this road as early as he could. He realizes that his supportive mother has sheltered him from a lot of darkness in this world (and I am not saying this as a way of criticism, I am just trying to explain how Noah grows as a character), and so he has to learn how to try to help Shane, even if it is only with his support. And if he is also able to lend some help to Shane’s friends, all the better.

I really liked the beginning of their romance. I liked that neither man’s issues stem from the fact that they are attracted to men. Noah’s mother always supported him, and he may have issues from his past relationship to deal with, but it does not have anything to do with him being gay. Shane is living on the streets and he has a lot on his plate to deal with, but that does not include him “having sex with guys in the past and liking it” (close paraphrase). I think he just accepted it as a matter of fact and moved on. I also wonder if Shane is on the asexual spectrum – he mentions briefly that sex is good but he did not think about sex too often. And it was also mentioned that the more he spent time making out with Noah, the more he became interested in doing other stuff with him. Demisexual maybe? Not sure, but I thought it was nicely done.

I liked that the plot provided important things for the guys to do – they ended up figuring out who had poisoned Shane’s friends and Dodger and grew closer to each other in the process. For me (as somebody who never lived on the streets mind you) the story felt very believable and rang true. However, I have no direct experience, so take that with a grain of salt.

There is also no explicit sex in the story – there are kisses, and closer to the end it is mentioned that they went further, if I read it correctly. I liked this book. Although it is number one in a series, it stands as stand-alone very well. The excerpt from the second book made me really hate one of the men in there, but hopefully I am wrong. It features a different couple (one guy is Shane’s friend from this book), but Shane and Noah are also mentioned briefly.
Grade: B.