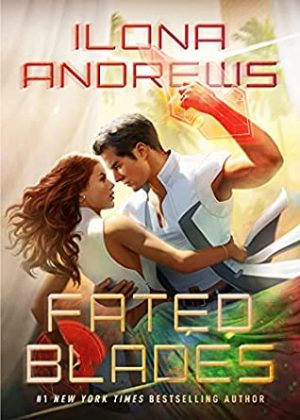 An uneasy alliance between warring families gets heated in this otherworldly novella from bestselling author Ilona Andrews.

At first glance, the planet Rada seems like a lush paradise. But the ruling families, all boasting genetically enhanced abilities, are in constant competition for power?and none more so than the Adlers and the Baenas. For generations, the powerful families have pushed and pulled each other in a dance for dominance.

Until a catastrophic betrayal from within changes everything.

Now, deadly, disciplined, and solitary leaders Ramona Adler and Matias Baena must put aside their enmity and work together in secret to prevent sinister forces from exploiting universe-altering technology. Expecting to suffer through their uneasy alliance, Ramona and Matias instead discover that they understand each other as no one in their families can?and that their combined skills may eclipse the risks of their forbidden alliance.

As the two warriors risk their lives to save their families, they must decide whether to resist or embrace the passion simmering between them. For now, the dance between their families continues?but just one misstep could spell the end of them both.

I have read probably everything this writing duo has published. I do realize that the Kingsmen universe has some similarities to the Hidden Legacy universe – only in the most broad sense. There we have powerful families who fight for influence, power, and money with the magic they have and here the powerful families resolve their conflicts through fights where they use “genetically enhanced abilities” (to use the words of the blurb and to avoid spoilers).

As the blurb tells you Matias and Ramona lead the two most powerful families on Rada and those two families – erm – don’t like each other very much for reasons. Actually there is a third family which is also supposed to be a very powerful one. All three of these families are trying to work on researching how to make certain technology that enhances their abilities and makes them even more effective. That is the best I could do trying to summarize the essence of their research. Also – to make it the least spoilerish as possible – some family members stole their research and if Ramona and Matias don’t find them soon, they will sell it to some horrible people. And besides such a betrayal being very personal, it would bankrupt both their families.

So they unite forces trying initially to do it as quietly as possible and go after the traitors and the research. In many ways this is typical Ilona Andrews – cool world, very fast moving plot, and powerful families fighting each other but joining forces when it truly matters, lots and lots of violence but mostly against bad guys and, as far as I am concerned, off the charts chemistry between the main characters. I do realize that a novella cannot give us fully drawn characters yet – and if they continue writing in the Kingsmen universe I have no doubt the characters will get more depth and dimensions, but what was already there I liked a lot. Overall this book made me so happy. I read it in one sitting, so invested I was in the outcome. B

And I want the whole story devoted to the married couple who leads the Davenport family so very badly.