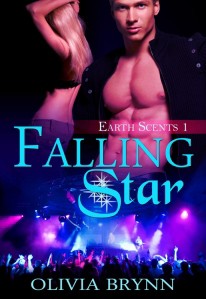 Who is it who said that books about rock stars don’t sell? Well, in the case of this book, I hope that saying is wrong.

Adam Nash parties like a rock star – even if he’s a country and western rock star. And he’s got the headlines and tabloid stories to prove it. But after his latest “trash the hotel room” episode, he’s determined to clean up his act. He also needs to get something for his assistant’s birthday or she’ll make his life hell.

Spying a flower shop, he insists the car be stopped so he can duck in and make the purchase himself. Inside, he finds Jade Graham who just happens to be about the only woman in LA who doesn’t know who he is – courtesy of her past 6 years spent cataloging flora in Colombia. Curious to see how long he can remain anonymous, Adam flirts with her than later calls her for a date.

Things go well, due to the work of his assistant and bodyguard, and Adam finds himself falling for this unpretentious woman. Meanwhile, Jade is also falling hard for the mysterious Adam – kudos for having her realize that something is up – who wants her to get to know him for himself before she learns who he is. Because at that point, he knows all hell will break loose. Is there a future for this celebrity singer and his florist?

Since this is a short book, you’ve got to cram a lot of story into a little space. But I like that you only take us from initial meeting and flirting to a potential HEA. I also like that Adam is well aware that any relationship with him will change Jade’s life and perhaps cause her a lot of hurt in the process. Good for him that he makes sure she’s also aware of it. The details of Jade learning about Adam’s world – checking out the limousine and the crowds – seemed realistic to me even if she was so quickly forgiving of him for not initially revealing who he was.

The details about Adam’s career and lifestyle give me a sense of who he is without overwhelming the story. Since he lives in this extravagant world, I needed to see some of it as well as see it contrasted with Jade’s normal, ho-hum world. Adam must be selling music better than Garth Brooks at his best in order to fund his house, cars, bodyguard and boat!

The scenes in which Jade and her roommate Dean are salivating over the plants at Adam’s house make sense based on what the two of them do and add an additional touch of humor to the story.

I liked Dean and Jade’s relationship, their bantering and care for each other and the story’s easy acceptance of Dean’s homosexuality. It’s definitely a Gay friendly world. But I wish that Dean hadn’t also come across as such a stereotypical Gay Best Friend. At least the two of them weren’t squealing together like Julia Roberts and Rupert Everett.

As I said, I’m glad that the book ends with Adam and Jade only headed down the road to commitment instead of already happily planning their wedding – despite Adam checking out rings at Tiffany’s. I can believe the sexual heat between them and the beginnings of love but with the one and only conflict occurring so late in the story, I think they rightly need some more time before any wedding bells. Thanks for giving it to them. B-

This book can be purchased at Liquid Silver.

→ Jayne
Previous article: REVIEW: What the Librarian Did by Karina Bliss
Next Post: Friday Film Review: Away We Go