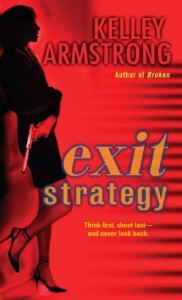 I know I’m way behind the curve when it comes to this book.   If there had been a bus, it departed weeks ago and I’m the lone person standing on a street corner with only tumbleweeds to keep me company.   There’s no reason it took me so long to pick it up.   I’m a big fan of your Otherworld paranormal series and I like reading books about female assassins.   But even so, it’s languished in my TBR pile for nearly a year now.

Luckily two things recently happened.   We received the sequel for review, and Keishon announced she’d be once again holding the TBR Challenge in 2009.   That was more than enough encouragement for me, so I fished Exit Strategy out of my teetering TBR pile and dove in.   Maybe I should pay attention to signs like these more often, because I don’t regret the decision one bit.

Nadia Stafford was once a good cop, but she retired prematurely when she shot and killed a suspect.   Picking up the pieces, she opened a lodge and made a good attempt at starting a new life.   But as with most new businesses, money was slow to come in and the lodge was in danger of closing only a few years after it opened.   That’s when Nadia received an offer from a small-time mob family to become their personal hitwoman.

Nadia can’t really complain.   She now has the funds to keep the lodge running until it takes off, and business shows signs of doing just that.   She knows the sorts of jobs the mob family wants done and so far, they haven’t been anything that violates her own sense of honor.   Inevitably, they all tend to be jobs involving taking out family rivals or underlings who’ve crossed the line and endangered the delicate balance of power in the criminal underworld.

Then a series of sensationalistic murders hits the U.S., dubbed the work of the Helter Skelter serial killer.   That’s bad enough but what’s worse — all signs point to the Helter Skelter killer being a professional hitman.   As a result, Nadia teams up with her mentor, Jack, to stop him.   After all, a professional hitman turned serial killer isn’t a good thing.   First of all, he’ll attract unwanted attention to hitmen everywhere who are just trying to do their job.   More importantly, if it’s a hitman gone bad, someone’s who succumbed to the power of killing people and the fear that it inspires, he needs to be put down much like you’d put down a rabid dog.

What I liked best about this book was that you gave us a sympathetic female assassin without downplaying the grim realities of her line of work.   It’s not glorified but it’s not minimized either.   Nadia is a tough heroine but it’s easy to see how she came to this point.   She comes from a family of cops.   It’s in her blood.   But just as there are grim realities in being an assassin, there are grim realities in being a cop.   Sometimes the suspect that’s guilty beyond a shadow of a doubt gets away.   Sometimes the system fails to deliver justice.   Nadia learned this firsthand as a child and when she’s confronted with it again as an adult and as a cop, she makes the choice that cost her career.

Because of that traumatic childhood event, Nadia suffers from survivor’s guilt.   It’s what led her to become a cop.   It’s what keeps her code of honor as an assassin.   There’s a fascinating thematic exploration in the book about the boundaries assassins put down, what lines they will not cross, and under what circumstances they will.   One of the things that Jack, as Nadia’s mentor, emphasizes to her is the importance of having the lodge in her life, of having something other than this profession.   Because let’s face it: what kind of person does it take to be an assassin for their entire life?   And is Nadia that kind of person?   In meeting the various assassins throughout the book — from Jack to the Helter Skelter Killer to Evelyn, Jack’s mentor — there’s a noticeable difference between Nadia from them.   Will Nadia retain her code of honor or will she become like them?

Speaking of Jack, the tension between Nadia and him is smoking.   I realize there’s currently a more likely love interest for Nadia at the moment but for me, Nadia and Jack is where it’s at.   It’s not so much the mentor and student relationship because I generally don’t find that dynamic interesting and in fact, many times find it off-putting.   It’s the fact that sometimes I get the impression Jack is mentoring Nadia not because he wants her to be a good hitwoman but because he doesn’t want her to become like him or any of the other assassins he knows in their line of work.

For a book that’s nearly 500 pages long, I thought the plot moved at a fast pace.   It had enough twists, turns, and complications to keep me turning the pages.   As I said earlier, Exit Strategy doesn’t glamorize the life of an assassin.   It shows all the legwork and research that leads up to a hit and all the preparations, planning, and contingencies that must be taken into consideration.   Put like that, it sounds boring and tedious but this book made it interesting.   I enjoy reading details like that; if anything, glossing over such details annoys me as a reader.   And what I liked even more was that the idea of an assassin needing to plan and prepare plays just as big a role in the plot as the idea of an assassin getting drunk on power.

Many thanks to the TBR Challenge for coming along to give me that extra kick in the butt to pick this up.   Otherwise I would have missed out on a really great read.   What’s even better is that I have the sequel, Made to Be Broken, to look forward to.   Sometimes there are advantages to waiting so long to read a novel — no long waits in between books.   A very high, solid B+ for me.