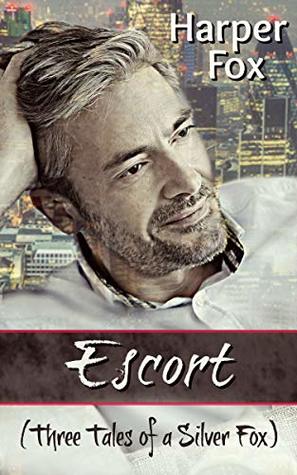 On the eve of his fiftieth birthday, George’s world is pretty much a wreck. His husband of twenty years is divorcing him for a woman, a baby and a second try at life. He’s lost his job and his home, and he’s living in his brother Andrew’s spare room.
But if George has given up on himself, Drew is more optimistic. He’s hit on a daring idea for George’s fiftieth, a present he won’t soon forget.
When a handsome sex-worker called Silver knocks on the hotel-room door, George tries to send him away. But Sil is persuasive and kind, and George’s inhibitions melt away to a night of unimagined pleasures. Stranger still, when daylight comes, George’s one-night-stand man-for-hire shows every sign of wanting to stay.
But these two men are from different worlds, and George is sure it’s too late for second chances. Silver’s a mystery to him, dashing and dangerous, walking the wild side of life. A trap is closing around the silver-fox escort: will George learn to trust himself in time for Silver to be saved?

I stumbled upon this story by accident when I was commiserating with some book friends on the board I frequent about trying to find something good to read. I saw your book and thought why not. It seemed quiet, intimate and not as over the top as I found a lot of your books to be.

I dove in and overall I really liked it, but I should have known better because the secret that Silver keeps did seem very over the top and not too plausible. But while I was reading, I rolled with it and it more or less worked for me within the constraints of the story. I also really really liked the main characters – I had read one Amazon review before purchasing the book and I completely agree that both George and Aaron Silver a/k/a Sil are kind souls who try to treat the world around them with kindness.

The story is written from both George and Silver’s POV, however George is narrating in the first person and when we are in Silver’s head we are in third person POV. It worked well enough for me, although I do wish for a more distinct difference between their voices.

As the blurb tells you in the beginning of the story,  George is not in a very good place, because his husband of twenty years left him for a young model. And with his fiftieth birthday closing up on him, he feels all alone in the world. Although of course we do know right away that George is NOT completely alone – his brother Drew loves him dearly and would do anything to help him, to support him, even to purchase a night with the escort service.

George is also an architect and while his brother offered him a job at his start up architect firm, Drew initially cannot afford to pay much and George knows that he would have to find something else soon.

The night with the handsome escort who is several years older than George (I took Silver to be fifty five or fifty six) turns into the mutual desire to continue their acquaintance, only George is reluctant for several reasons and for now they part ways. I was frankly amazed how this author convinced me that the feelings they had for each other after one night – one night could turn into something bigger if both men would want it.

Aaron Silver is a sweet kind man as well, and he charmed his way into my heart just as much as George did.

Then strange things started to happen in the story. Actually no, the strange things start to happen later. First we see that Drew, bless his kind heart helps another mutual friend to hire Silver for the night and we see the night of Silver working as in really working without any extra feelings involved and in a way that was a very sweet and kind event as well.

Don’t worry, I don’t think you would find this story too sugary, because shortly thereafter the narrative becomes a suspense and it did give me a little whiplash I won’t deny it, but as I said above within the constraints of the story it worked for me . It worked for me while I was not thinking too much about it.

And of course the ending was lovely, pretty good HFN likely to turn in HEA I thought .