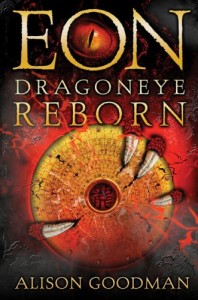 I first heard of your novel last year while reading a fantasy blog about a book released in Australia called The Pearls of Wisdom.   Being intrigued by the premise, I looked for information about a North American release but turned up nothing.   Then a couple months ago, I received my monthly package from Jane and found this book inside.   No wonder I couldn’t find information about the book when I looked before.   It has a different title in the U.S.!   (And to make things more confusing, the title is Eon: Rise of the Dragoneye in the United Kingdom.)

What caught my interest was the fact that Eon: Dragoneye Reborn takes place in a fantasy setting loosely based on historical China with some influences from Japan and features a magic system inspired by feng shui and Chinese astrology.   I’m constantly on the lookout for fantasy novels with settings based on non-European cultures so that was more than enough reason for me to pick it up.

Eon is a twelve-year-old boy who’s been training for years in the study of dragon magic.   Dragon magic consists of two components: martial arts and actual magic.   The hope is that Eon will be chosen as the next Dragoneye apprentice.   A Dragoneye is a person who controls one of the twelve dragons that bring good fortune to the world by controlling the forces of nature.   There’s only one flaw in their plan.   Eon is actually a sixteen-year-old girl named Eona.   Girls are forbidden the use of dragon magic so it’s a masquerade that could lead to her death if she’s ever found out.

The magic system operates on a twelve year cycle, in which each dragon reigns as ascendant for one year.   When a new apprentice for that year’s ascendant dragon is chosen, the former apprentice ascends to the rank of Dragoneye.   The former Dragoneye then retires, weak and debilitated because they’ve been giving up their life energy to their dragon for the last 24 years.   There is great honor and prestige in being a Dragoneye but like all things involving power, it comes with a price.

While Eon has substantial magical aptitude, her martial arts abilities are hampered by the fact that she is a cripple.   This makes some of the stances and forms nearly impossible, something that works against her in the trials.   And sure enough, she fails to be chosen.

But then the unexpected happens.   While it’s true there are twelve dragons, one of them has been missing for 500 years: the Keeper of Truth, the Dragon Dragon (aka the Mirror Dragon), and the dragon of the East.   (Each of the dragons is associated with both a direction and an animal from the Chinese zodiac.)   After being missing for centuries, the dragon returns and chooses Eon, catapulting her directly into the rank of Dragoneye and landing her in the Imperial Court, in the middle of a vast political conspiracy to seize control of the throne from the reigning emperor.

I know many readers are tired of the girls masquerading as boys trope in fiction, but it worked for me here.   I found it interesting to see how Eon mentally tried to make herself as male as possible and rejected her feminine side.   While I won’t spoil how important it is here, that issue forms a core conflict throughout the entire book beyond the standard exploration of the increased freedom that boys have over girls in patriarchal societies like this.

Gender also plays other roles in the story.   The reason why Eon is able to masquerade as a boy so effectively is because she’s pretending to be a eunuch.   This allows her to move about without scrutiny and suspicion.   One of her first allies in the Imperial Court after she ascends to the rank of Dragoneye is Lady Dela, a favored Imperial courtier who is physically a man.   Lady Dela’s transgendered character offers a nice foil to Eon who, despite embracing the masculine, is really still female.   Eon simply rejected her femininity because not to do so would mean her death.   Lady Dela chooses to live as a woman despite being labeled a freak because to do otherwise would be untrue to her self.   It’s still somewhat rare to see this sort of exploration in fantasy novels so it was nice to find that here in addition to the non-Western setting.

Another thing I liked was the action.   I would think it hard to write martial arts effectively, to capture the action without dragging it out inh overdescription, but I really enjoyed that aspect of the book.   The sword forms practiced by the Dragoneyes were very clear to me and easy to visualize.

The question of Eon’s training was another interesting conflict in the book.   As I mentioned earlier, the normal protocol is to first train as a candidate and if chosen, then become an apprentice for twelve years and then become a Dragoneye for another twelve.   Because the Mirror Dragon had been missing for 500 years, there is no Mirror Dragoneye, which means Eon skipped the apprentice stage.   Even worse, there’s no instruction manual about how to become a Dragoneye — it’s all practical training — so Eon has to muddle through learning how to call and control her dragon on her own.   As can be guessed, that’s easier said than done.

On the other hand, one thing I wished we could have seen more of was the various dragons in action.   That was such a fresh and unique aspect of the magic system that not seeing more of it was disappointing.   I also wish we could have delved more into the mystery of why the Mirror Dragon had been missing for 500 years and what happened to the last Mirror Dragoneye.   I have my theories and based on the revelations in the final pages of the book, I can only hope we’ll learn more in the next book which concludes the duology.

Overall, I enjoyed this book for the fresh setting, interesting heroine, and various conflicts running throughout the book.   I will warn other readers though that they may find the ending something of a cliffhanger (although I personally didn’t find it as abrupt as the ending of The Hunger Games).   B+

This book can be purchased in hardcover from Amazon. No ebook format because kids don’t like technology.