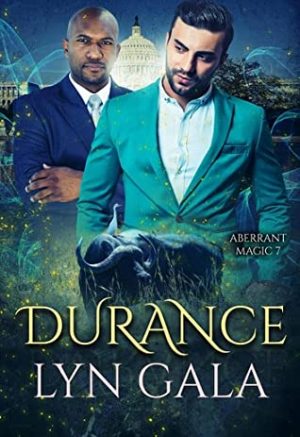 Darren and Kavon have finally hit their stride, both personally and professionally. The team is expanding, the FBI finally understands the importance of Talent-based law enforcement, and Kavon and Darren have settled into a strong partnership. They are prepared for the long wait until the evil ifrit reappear on Earth, and they plan to be ready. However, when the first of these ancient powers returns, their preparation might not be as complete as they had assumed and the dangers they face are much more than either of them had expected.

Worse, old faces from Kavon’s past force him to look at the choices he has made in his life–the choices that have defined him as a man, a lover, and an agent. How can he believe in anything when he loses faith in himself? His relationship with Darren is the one touchstone that allows him to hold on through the storm that follows the reappearance of the exiled ifrit. But if Kavon and Darren are not strong enough–if their love or their guides falter for even a moment–the lives of every magic user, every shaman, and every human on Earth may be forfeit.

I read and reviewed all previous six books in this series. Overall I really liked them. I was pleasantly surprised when I saw that book seven was out. Readers, if you are interested in checking it out, please don’t start with this book – while a couple of books ago the story became a little more episodic, you will miss the development of the relationship between our main couple and you will miss the overarching story line about magic and magical guides from another worlds coming back to our world.

While I still loved the main characters and many secondary characters and really enjoyed the world, I was also disappointed in this book. I read it in three hours because I was that eager and excited. But when I finished I basically thought to myself – that’s it?

And it is actually quite hard to explain why I thought that. When we finished book six, it was quite clear that soon evil ifrit will show up in our world, and the author does not change the game mid-stream. They indeed show up and wreak some havoc, but I guess it did not feel scary to me? It felt disappointingly small? I mean someone gets hurt pretty badly, but I just did not feel much danger.

Maybe this is the best way to describe it. As a reader when I look for a new book and read the reviews, I tend to discount reviews which say oh I expected this and the book did not deliver, so the book is bad because it did not deliver on my expectations. I am convinced that I should attempt to discuss the story which is on the page, not the story I expected to be on the page. However, all of this only is relevant to me when we are talking about stand-alone books. Does anyone write stand-alone books these days anyway? Or first books in a series? I feel that when we are talking about the seventh book in the series, it is basically impossible to not have at least some expectations formed *by the previous books in the series.* I expected the start of the war to be something awful and scary and terrible, nothing more specific than that, and I did not feel like I got that.

The adventure plot still delivered some nice moments, but I truly enjoyed it maybe in the last ten or fifteen percent of the story.

I appreciate Darren and Kavon going strong, I even don’t mind that they still argue about each other’s dominant character traits . One may say that this is repetitive, but to me it is realistic, I don’t think Kavon’s over protectiveness is going anywhere for example, so it makes sense to me that same argument may pop up at times.

I like them and the other team members, but I really would love more BANG in the next book if it comes.