I wasn’t sure what to expect when I received a copy of Driven. While it is the third in Dorchester’s new “Shomi” line, it was the first of the new imprint that I read. It is quite safe to say that I was favorably impressed. 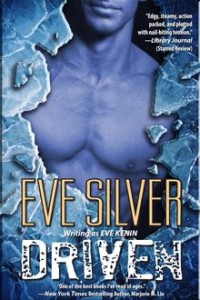 Driven is a story set in the Frozen North, in a post apocalyptic world (kind of Mad Max meets Red Dawn). Raina Bowen is a driver who is trying to win a high dollar prize for getting her grain haul to a destination before everyone else. Problem is that the highway that was built by Janson Transportation who is controlled by a very evil man, Duncan Bane. She stops at a truck stop to wait for a person called the “Wizard–? who is supposed to provide her a license to jump the line on the highway, thus giving her an advantage to winning the race.

Wizard is a genetically enhanced human who has issues with Duncan Bane. He has very little emotion, looks at things in a very analytical, almost computer-like way. Raina is attracted to him but refuses to be turned aside from her goal of winning.

The best part of Driven is the careful and unique worldbuilding. There is very little info dumping rather a gradual divulging of information when the situation calls for it. The backstory, character motivations, and world creation all unfold in a seamless manner.

This book does a very good job of blending the romance with the action. Wizard and Raina engage in some very heated physical exchanges that aren’t often seen in futuristic novels, particularly the previous Shomi books.

The drawbacks would be the one dimensional villain. Given Bane’s actions, it is hard to believe that no one has offed him yet. Wizard is a bit of cipher, a mystery. I wasn’t quite sure how he was created or his entire backstory, but there was enough to make me keep turning the pages. B+

→ Jane
Previous article: REVIEW: Never too Late by Anna C Bowling
Next Post: What Authors Should Look for in an E Publisher