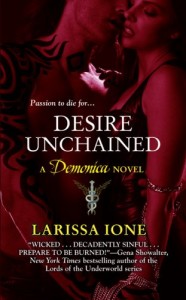 I read the first novel in your Demonica paranormal romance series last year but found it didn’t work for me.   Most of that has to do with my on-again, off-again malaise with the urban fantasy genre and the fact that its heroine had several traits that reminded me too much of the urban fantasy leads I’ve developed an aversion to over the years.   But I wasn’t quite ready to give up on the series because I do like the idea of a demon hospital as a setting.   Lucky for me, the hero and heroine of Desire Unchained had a different dynamic that worked much better for me.

Shade is one of three incubus brothers and works as a paramedic for the series’s titular demon hospital.   When Desire Unchained opens, he awakes to find himself handcuffed to a woman.   Under other circumstances, he wouldn’t object to this but there are two problems.   First, he’s imprisoned in a cell by the people responsible for harvesting the organs of demons.   And secondly, he’s handcuffed to his ex-lover, Runa.

Runa was once a quiet, shy woman — that is, until Shade broke her heart.   Unfortunately, the night she fled his apartment after catching him in flagrante delicto (with two other women, no less), she runs across an angry werewolf and is mauled within an inch of her life.   She survives but not without some lasting side effects, like changing into a wolf three days every month.   The military saved her, however, and because of that, she agrees to infiltrate the demon hospital to find a missing operative.   And if it should happen to bring her face to face with the man who broke her heart so she can make him pay, so much the better.   But she never expected to be kidnapped by someone from the incubus brothers’ past who wants revenge.

It’s amazing what a difference hero-heroine dynamics makes.   I’m one of those readers who’s left cold by the enemies to lovers trope, but give me former lovers turned enemies who reunite and must overcome their differences to conquer a problem and I’m there.   What I liked about Shade and Runa’s relationship was that they’re not quite the same people they were when they broke up a year ago.   Shade is sort of a manslutty asshole but he acknowledges that it could have been something more with Runa and that scared him, thus encouraging him to scare her off.   And Runa’s year spent as a werewolf, going on missions for the military, has done her good, giving her the spine and confidence she needs not to be railroaded by Shade.

Another thing I liked was the way Shade and Runa had to work past their trust issues.   Runa has definite reasons for not wanting to trust Shade: she loved him and she walked in on him cheating on her.   She doesn’t want to put him in a position to hurt her like that again.   Understandable since not only did he hurt her emotionally, that very same night she was turned into a werewolf.   One did not cause the other but the two incidents are linked in her mind and with them both being so negative, I can’t say I blame her.

Shade’s trust issues are of a different sort.   He and his brothers come from a species of incubi that goes through maturation cycles.   When they complete their final maturation cycle, they become demons whose sole purpose in life is to impregnate women, whether those women acquiesce or not.   Because of this single-minded focus to breed, their kind often goes mad in this stage.   The only way to avoid this fate is by mating with a female.   The downside of this?   They’d be mated to the same woman for the rest of their life, which is a deterrent for a species whose biological impetus is to impregnate as many different women as possible.   Due to various circumstances, Shade mates with Runa but it’s an incomplete mating.   He’s bound to her, but she’s not bound to him and because of this, he must trust that she won’t leave him, an action that will cause him to die.

I was glad to see the mystery of the organ harvesting ring revealed as well as the motivations behind it.   On the other hand, I wish we could have seen more into the relationship between the perpetrator and the woman he was supposedly doing it all for.   From what I read into it, I admit feeling a little sorry for him despite his role as the crazy, evil antagonist because let’s be honest.   She didn’t seem too impressed by him and I fail to see how all the organ harvesting in the world was going to change that.   So based on what little we did get of them, I would have liked a little more to get a handle on what could have inspired him to go to such lengths for her.

Oh, and I’d just like to say that I hope Kynan and Gem get their own book someday or I’ll be sorely disappointed.   But for now, I look forward to the next one and hope the story I’m waiting for will come eventually.   B

This book can be purchased in mass market from Amazon or ebook format from the Sony Store and other etailers. (Pleasure Unbound is available for $1.00).

→ Jia
Previous article: Dear Bitches, Smart Authors Podcast with Carolyn Jewel
Next Post: ESSAY: Why I Love to Read and to Write by Gail Dayton