WARNING: spoilers for the first four books are impossible to avoid. 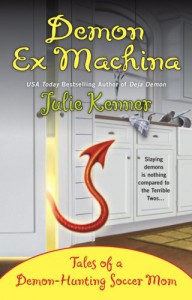 I’ve been addicted to this series since it first started four books ago. While some things have stayed the same, others, thank goodness, have changed and evolved as the series has progressed. And if there’s one thing I can count on, it’s a bang up finish with a “to be continued…” bombshell to make me frantic for the next installment.

Kate Connor, level five Demon Hunter, is once again faced with the powers of Darkness in her otherwise quiet CA beach town of San Diablo. But now her secret identity, which she struggled to hide during past books, is not so secret anymore. Her almost fifteen year old daughter knows, her best friend knows and now her second husband, Stuart, knows. Oh and her first husband, Eric, who was murdered five years ago then returned to her in the body of another man and who is now known in town only as a teacher at their daughter’s school, also knows. Yeah, it’s a lot to keep straight.

The book starts with the usual attack of a demon who utters cryptic threats against Kate and hints of the demonic showdown to come. But this time, the showdown looks like it will involve Eric and a secret he kept from Kate during their youth and marriage. It’s a secret that could cost him not only his life, but his soul as well. And the demon of the day has her sights on their daughter Allie as well.

Kate is still a suburban mom who carpools, grocery shops, tries to keep up with the destruction her toddler son wrecks on her house while arranging birthday parties. She still goes out hunting demons as night with her trusty stiletto in hand. Once again she’s faced with a demon moving in on her turf and as usual, she needs to rely on friends and family to help her discover which particular demon it is as well as the best way to eliminate said demon. I’m not sure whether to laugh or roll my eyes at the fact that some of the information is obtained via an internet RPG. I guess you gotta take the information where you can find it. And I love the fact that Fed Ex delivers something that absolutely, positively has to be there.

I cheer at the way you keep the characters and their environment from becoming stagnant. Stuart now knows about Kate’s past and all she managed to keep hidden from him in the earlier books. He’s even training along with Allie to hunt demons with Kate. Kudos to you for having him have to take some time to get used to it all. Yet, as the book progressed and more people than ever learn about demons and Kate’s job, I had to wonder that Kate doesn’t just take out an ad in the local paper and have done with any anonymity.

One thing that has bothered me in past books and which really bothered me in this one are all the secrets Kate has kept and her instinctive reaction to lie when someone is close to discovering the truth. At first, I could understand why she didn’t want her past to intrude on her present or to color the way people she loves view her. But in this book, despite her pledge to tell people the truth, she still lies. But just as it was really getting to me, you take this, turn it around and have Kate face the music for her lies as well as realize how Eric’s lies are now going to come back and bite them all in the collective ass.

A second issue that was bugging me is the relationship between Kate and Eric and how it interferes with Kate’s current marriage to Stuart. Talk about difficult and being torn between two lovers. I didn’t think that it could continue as it had for much longer and bless your heart, you used this in the current conflict as well. Up until the final moments of the story, you kept me guessing as to whether or not Eric would survive the demon throw down. Lots of points to you for that. As well, I wondered what would happen with Kate and Stuart’s marriage. Let’s just say I want the next book in my hand right now to discover the answers.

So, I’m tearing my hair out for the next installment and – am I psychic or something? I guessed the locale where you’d take the story next – am enthused to see what will happen there. B for “Demon Ex Machina.”