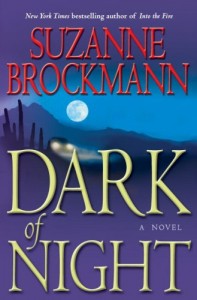 Controversy sold me on this book. That and the 100% micropay rebate offered by Fictionwise. My last book was Gone Too Far. I got tired of the extended relationship arcs and I felt that the direction of the writing was more mainstream than I liked in my romances. Further, the future books were about people I didn’t really know and never invested in and so I felt good about closing the door on the Brockmann SEAL chapter.

I don’t really want to belabor the plot of the book in this short review. Essentially Black Ops team member tried to walk away from his job, but his handlers didn’t want him to and try to kill him. In an effort to protect his friend, Troubleshooter Lawrence Decker covers up his death and pretends to befriend his fiance (whom I think he had a thing for before the fiance and his friend hooked up). Sophie Ghaffari has lusted/loved after Decker for years and now that he’s turned his attention to Tess, she turns to her best friend, Dave Malkoff, for support and comfort. Dave has loved Sophie for as many years as Sophie has loved Decker. But the folks behind Nash’s death aren’t content to stop with Nash. They’ve got bigger secrets to cover up.

Brockmann presents a large cast of individuals, a complex suspense plot and at least three romances in varying stages of completion. It’s a book with alot of stuff going on. To Brockmann’s credit, she manages to introduce most everyone, bring in a bunch of former stars, without undue confusion to the reader. There’s payoff for the longtime reader and there’s enough for a new reader. That takes a certain amount of skill.

Brockmann is a good writer whose plotting and pace is tight. There is very little wasted space in the stories and it seems that every conversation, action, or exchange has meaning. I appreciate that but all of those things don’t add uip for a perfect read for me. The book stumbled in some small and major ways for me.

First, the suspense plot takes place in the United States. It draws on established governmental structures to create suspense (i.e., the Agency plays a big part) but it does not allow itself to be constrained by realism. This is a problem for me because I think the best contemporary suspense writers grapple with both. In order for Brockmann’s plot to take place she requires you to totally disregard the laws and the Constitution of the United States. She requires complete and utter suspension of disbelief but because she fails to work within the system when it is inconvenient for the storyline, the suspense began to peter out. After all, where is the suspense when you know that the author will disregard constraints so long as it suits the plot? As the suspense wore to the end, it actually lost momentum because the actions of the characters had no boundaries. I began to laugh at the over the top nature of the story.

Second, the romances are all a bit compressed. I as I stated earlier, there is a lot going on in this story and two romances are often difficult to carry off in one story let alone three. Dave and Sophie’s romance was lackluster for me, primarily because Sophie spent so much time it seemed trying to convince Dave that her love for him was real. And her arguments were less than convincing to me.

Decker and Tracy’s relationship was allotted about as much time as a couple in a novella or short story. Largely the reader’s belief in Decker and Tracy’s couplehood relies more on the reader’s desire to se the romance to a completion than anything in the story itself. Decker’s love for Tracy is based primarily on more physical compability than any cerebral connection.

Third, Super Dave. This is the area that I was most disappointed. Dave had insecurities in being a geek, a non physical part of the Troubleshooters. Part of his inability to believe in Sophie’s love for him had to do with his insecuirtiy. One of my favorite parts of this book was Ken Karmody’s speech to Dave about the attractiveness of geeks to the hootest of the hot blonds. Certinaly no one seems hotter these days that Nate Silver, geek boy esxtraordinaire. So to sell us on the greatness of geekness, I would have thought that Dave’s triumph would manifest itself in utlizing his geekness. Instead, Dave is made into as one commenter called him “Super Dave” thereby cementing the concept that only those males who are physically superior can be a hero in a Brockmann book. This would be fine as I have nothing against physically superior men. The problem is that it does nothing to allay Dave’s insecurities. He apparently has to prove to himself that he meets some kind of ideal rather than acknowledging that a man with a brain is just as hot as anything. It’s internally inconsistent.

Despite the three issues, the book did not lag for me. If anything, SuperDave and the over the top suspense plot made me laugh rather than irritated me. The dialogue is terrific and I enjoyed, individually, all of the characters. They are a group of individuals with very common issues but they all come together to work to save one another. I’m not terribly interested in following more of the characters in the series, but as a semi “free” read, I was satisified. It’s a good way to spend a few hours. B-

→ Jane
Previous article: What an eBook File Should Contain
Next Post: REVIEW: North of Beautiful by Justina Chen Headley