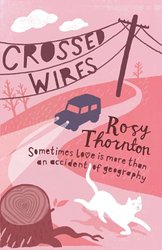 I’m not quite sure how to classify this book. It has a romance in it but when a couple doesn’t meet face to face until two-thirds of the way through the story, and then only for a few hours, it makes me debate whether or not to call the book a romance. But, regardless of that, it’s a book I enjoyed reading for a number of reasons.

Peter and Mina first “meet” when Peter calls in a car insurance claim after swerving to avoid his neighbor’s cat. It could have been worse, you see, but since his neighbor had just recently cut down the tree and all Peter hit was the stump the claim shouldn’t be bad. Should it?

Mina is amused at this almost hesitant Cambridge professor’s way of reporting the accident and his gentle, wry sense of humor. When he calls in the second accident, which occurs when he’s playing charades with his twin daughters while driving, he remembers Mina’s name and specifically asks for her, which is against all call center policy. It’s then that Mina takes it upon herself to check into his policy at bit and calls him at home about his claim.

And thus begins their weekly series of Sunday evening calls to each other wherein they catch up on each other’s day to day events and families. In between, we get to watch their ordinary, every day lives and see a slice of modern England.

Whether or not readers “take” to this book will depend on whether or not they’re willing to wait out the gradual “getting to know you” before the possibility of a romance develops or if they’re interested in Mina and Peter’s families, Sheffield and Cambridge style. I adored it but can see that it’s probably not for everyone.

Mina is a single parent, struggling with a daughter, Sal, who never takes her nose out of a book and a much younger sister, Jess, who is rebelling against their mother. Peter, a widower for four years, has twin daughters. The book begins with Cassie and Kim still sharing everything in life, which worries Peter, until they begin to show signs of dawning independence, which worries him more.

And through it all, we see modern English life. The council house Mina lives in in Sheffield and the country cottage Peter owns in the Cambridge fens. Mina’s struggle to reconcile her sister and mother and Peter’s efforts to help his grad student, Trish, work on her PhD thesis. The worry Mina has that Sal isn’t as social as the other girls in her class and prejudice that faces the travelers – aka gypsies – who Peter’s daughters befriend in school.

I had a wonderful time watching for little Britishisms to add to my store of knowledge gleaned over years of reading Chick Lit books. IPA and Evo-Sticks, Toad in the Hole and tips, HMV and “Just William.” I hate it when books are sanitized for American consumption, as if we can’t be bothered to look up phrases, things and words from other countries and cultures. I also enjoyed watching Peter’s excursions to the local pub and Mina’s tea time meals with her Mum as well as the Guy Fawkes celebrations and the complicated logistics involved in a simple school field trip.

The story ends with Peter and Mina edging towards exploring the connection they’ve felt between them for quite some time which, I feel, is the way to go with the romance. It’s not a HEA, at least not yet but is a potential one, nonetheless. Thanks for sending it to us for review. B+