REVIEW: Crash Into Me by Jill Sorenson 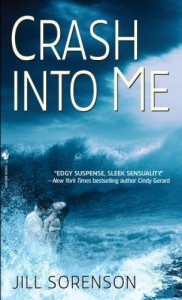 I have read your category novels and thus I was excited to make the transition to full length mass market novels.    This book had very real characters and very steamy love scenes. I found the suspense to take kind of a back seat to the deception/romance story and that, at times, the secondary love story between the hero’s daughter and a boy from the wrong side of the tracks to be the more compelling storyline.

Sonny Vasquez is part of VICAP for the FBI. She is asked to go undercover to see if she can flush out the SoCal Strangler, a man who has been picking off young women along the southern California coast.   Sonny is to go in and try to seduce Ben Fortune, a former champion surfer whose own wife was killed three years ago by the purported SoCal Strangler.   Except the man that was arrested and imprisoned committed suicide and in his note wrote that he did not kill Olivia Fortune or anyone else.   Fortune becomes the top suspect.   After observing Fortune, Sonny begins to rethink her plan to present herself as a beach bunny as   Ben shows no interest in them.   He is an early to rise, early to bed kind of guy who lives more monkish than a priest.

This is because all of Ben’s energy is devoted to taking care of his teenaged daughter, Carly.   Carly is messed up and it’s mostly Ben’s fault. He got Olivia pregnant when they were 17.   Then he took off full of fame, success, and fortune hopping from one wave to another and from one bed to another.   Olivia refused to marry him, despite his repeated requests until Ben dried out and gave up the other women.   He finally got his act together but by that time, Carly already believed that surfing was more important to her dad than she was.   To top it off, Carly and Ben’s rock, Olivia, was murdered.

Carly isn’t dealing with her mother’s death very well, although it happened three years ago.   She’s tempted by death. She’s self mutilating and she’s just so confused and angry and lonely.   Ben’s not much better. All he does is surf and watch Carly until Sonny comes into his life as Summer Moore.   Sonny aka Summer is edgy, dangerous, and hard to get and it all plays well for Ben who for once since his wife’s death feels the stirrings of arousal.   While Sonny is supposed to be there to investigate whether Ben is the SoCal Strangler, she gets tangled up in Ben and Carly’s lives.   Complicating the situation is James Matthews, a teenager who has lusted after Carly for years.

It is James and Carly’s relationship that carries the book.   James is the product of a horrible home environment. Abused by his father physically and emotionally, he carries with him a great sense of self hate.   Carly is all that he could never be and when she approaches him, it’s like a dream come true yet he knows he’s not good enough for her.   The scenes involving Carly and James and Ben are frought with emotion and James’ dual desires to protect Carly and not taint her with his bad blood are constantly at war with one another.

There was no effort to make Ben or Sonny into great parents.   Ben was not a great parent, but perhaps because of his past, he understood what the real dangers for Carly were and it wasn’t the threat of sexual tension between Carly and some punk kid. But Ben is a dad and he reacts like a dad, angry at this boy James and afraid of him as well.

Sonny and Ben’s relationship is not more complicated that James and Carly but less likeable because Sonny spends most of the time lying to Ben about who she is. It really left a terrible taste in my mouth that Sonny would engage Ben the way she did, particularly because she didn’t think that Ben was a killer and because she cared for him.   Sonny lured Ben in, knowing exactly what buttons to push and she never thought of revealing the truth to him at any time.   When Sonny’s comeuppance came, I felt like Ben had every right to treat her like he did and that Sonny didn’t do half the groveling that she should have to make up for her deceit.

The suspense portion of the book was weak as well.   Sonny did very little investigating.   I didn’t believe for a second that Ben had killed his wife and the attempts to create drama by casting the suspicious light onto him did nothing for me.   It was obvious who the killer was, I thought, and the failure of Sonny to consider the other individuals as suspects did nothing to dispel the idea that Sonny was a bad FBI agent.

I loved the location of La Jolla and Torrey Pines.   The love of surfing and the metaphors that the water represented had strong visual impact. I really felt like I had been transported to Ben’s beach house.   The sensuality of the book was high. I admit I felt uncomfortable at times with the explicitness of the teen sexuality but it was a very important component of James and Carly’s relationship.   The chemistry between Ben and Sonny was electric and their love scenes smoked up the pages. I like alot of realism in my contemporary books and Ben and Sonny and James and Carly were all very real characters for me.   I received the book as an ARC but bought my own digital copy; and so while I was debating between a B and B-,    despite the flaws in the story, I had to give this story a B.*

*To clarify, I felt that because I wanted to have a digital copy of the book I must have thought highly of the book so ultimately it must have been a B grade for me.