LA cop Jericho Crewe got the hell out of Mosely, Montana, when he was seventeen. Fifteen years later, he’s back, and everything is just as messed up as when he left. He planned a quick visit to deal with his injured father, but of course things are never that simple. Family complications, police complications, social complications—and, as always, Wade Granger complications.

Jericho and Wade had been so close, once upon a time. First friends, then more than friends—and then, after Jericho’s escape, nothing. Wade’s magnetism hasn’t been lessened by a decade and a half apart; even when Jericho learns that Wade is the prime suspect in the death of Jericho’s father, the old connection still sparks.

When Jericho’s newly discovered half siblings are kidnapped, he needs to trust someone to help him find them. Wade’s a terrible choice, but Jericho’s never been known for his good judgment. Anyway, he’d rather make a bad decision with Wade than a good one with anybody else.

I really enjoyed this book while I was reading it. It is the first in a series and according to your publisher, Riptide, there are four parts in all. This means that to get the whole story you will have to pay twelve dollars, assuming each installment is priced the same as the first.

LAPD detective Jericho Crewe comes back to the small town of Mosely, Montana, where he was born and lived till he was seventeen. When Jericho left at seventeen he mostly did not look back since his father had abused him, but he also left his first love, Wade, with whom he had got into mischief and occasionally more serious trouble with the law when they were teens. Jericho’s exemplary military service and deployment record went a long way towards convincing the LAPD to hire him despite his teenage arrrests, and I liked that the author addressed that issue.

The sheriff in town is his other childhood friend, Kayla, a daughter of the former sheriff. And there are also federal agents looking into the death because Jericho’s father dabbled in illegal activities like smuggling; they are interested to find out whether his business associates killed him. And the surprises just keep coming when Jericho learns that his father remarried, giving Jericho young half-siblings and a ste mother named Nikki. Nikki turns out to be the woman who called him. Meanwhile, Wade is still in town and wants to get hold of Jericho’s father business contacts.

This setup provides lots of stuff with the potential to happen and it does. We learn all of this information early on, so I have not given away any real spoilers.

I really liked Jericho. I liked his sarcastic voice, I liked him for being an honorable guy who decided to stick around and help. I have to say, though that while I understand his stepmother’s behavior to some degree (no, she did not kill anybody – although maybe I should not be so fast, maybe we will learn that she did kill somebody in the next books, although I doubt it), I really thought the woman was an ungrateful shrew.

This was a true romantic suspense, IMO, because the suspense storyline drove the plot, but of course there was also tension between Jericho and Wade, but nothing happened. I wonder for how long Jericho’s resolve, that he is supposed to uphold the law and Wade is on the other side of the law, will last. I am certainly giving the next book a chance, but I recognize that it has wallbanger potential for me as well. 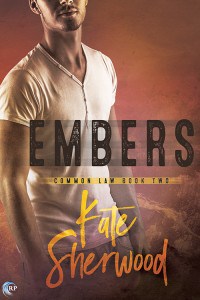 He doesn’t really need a biker war on top of it all, but as the bodies start to pile up, it becomes pretty clear that’s what he’s got. Not only that, but Wade’s involved somehow, and as soon as Wade is a part of something, things that seemed clear become cloudy.

With the feds breathing down his neck, Jericho has to find his way through Wade’s maze of half truths and manipulations. It would all be so much easier if Jericho could think straight in the other man’s presence. So much easier if their passionate past could be forgotten, and if he could be sure he’s strong enough to resist the temptation of a passionate present.

Jericho Crewe is back working as deputy sheriff in the small town of Mosely, Montana, a town he left behind fifteen years ago because of an abusive father who was up to no good, also leaving behind his first love, Wade Granger, whom apparently Jericho could never forget. Note that this a second book in the four book series and you cannot read it as a stand-alone, no matter what the blurb says. These are not four separate stories taking place in one small town as a common setting, you would have to go back to get the full background on the characters and their motivations. The motivations we think characters have anyway, because right now I am not sure about the truthfulness of any character except Jericho, whose POV we are in.

As we know after the explosive events of the first book, Jericho is kind of on loan for six months to the town’s new sheriff Kayla Morgan (who also happens to be Jericho’s childhood friend). I thought from the first book that Jericho is a real sweetheart and I still think so, rough exterior notwithstanding.

He is still helping his half-siblings, about whom he never knew till he came back to Moseley and learned that his bastard of the father was dead and most likely murdered. His siblings’ mother is still an ungrateful shrew and I am now annoyed beyond belief by her behavior. No, Nikki, he does not owe you *anything* and he is not obligated to take care of your kids. It’s great for you that he feels family obligations, but not everybody would do the “blood thicker than water” thing, so be grateful that Jericho is.

And then there is Wade Granger. Wade wants to become a major crime boss and pretend that he is a bigger fish than he really is, but he is also somebody who loved Jericho and apparently never forgot him. Here is the thing – a love affair between cop and criminal is by far one of my *least favorite tropes* in m/m fiction (in any fiction really, but I only started seeing it so prominently when I started reading m/m romance). I don’t know why so many m/m writers seem so fond of it – I mean I get “opposites attract”, “from enemies to lovers” and all that, I love good “from enemies to lovers ” myself, but please! It makes the cop look stupid at best and corrupt at worst. Not that I mind that in all settings, but maybe not in the romantic hero? In any event, while on the surface this series seem to plunge into this trope, I think that it takes the road a little less traveled.

First and foremost Jericho does not hide anything from anybody – he tells both Kayla and the federal agents about the communication Wade has with him, the visits Wade makes, and all of that. More importantly, though, I cannot figure Wade out – I still hope to high heaven that he is not the murderer and not even a criminal no matter how everything appears to be. A couple of times the things he said made me go, hmmmm. Note that this is not a spoiler of any kind, just my speculation – as I said, right now it is not clear whether Wade is a murderer, but everything points to him being a crime boss anda very manipulative one at that.

And if he is a criminal, well, as I said, Jericho does not hide anything, but in this installment *anything* has already been transformed into *almost anything,* they started on the road which definitely worries me. At this point I would have expected Jericho to walk away if he still thought Wade was a bad guy, and Jericho certainly thinks that as well – too involved, too close to be anything close to objective investigator.

I was still very entertained. I enjoyed the investigation, trying along with Jericho to decide who hides what things, and I will read the next book. But now I am even closer to wanting to slap Jericho. We shall see at the end I guess.