I admit I hadn’t heard at all about either you or your debut novel until I saw it mentioned during the Scholastic preview webcast a few months ago. I made a mental note to request Clarity, but I’m afraid it fell through the cracks. Thankfully, Scholastic sent along a copy anyway and Jane forwarded it on to me. 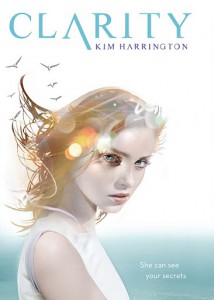 Clarity Fern lives with her mother and older brother in a tourist town on Cape Cod. Tourists — and more importantly, their money — are very important to the Fern family. They’re psychics. The real kind. Clare’s mother is a telepath, her older brother can see and talk to ghosts, and Clare is psychometrist, meaning that when she touches things, she has visions relating to the owner. Of course, most people think they’re either scam artists or a novelty just for fun, but the money raked in during summer tourism pays the bills during the winter. The family must eat.

Clare expects the upcoming summer to be more of the same — her wishing she were a normal girl without any psychic ability from a normal family without any psychic ability and her being trapped in the house by her mother to give readings to whatever tourists walk in. Unfortunately, the Fern family find themselves having to contend with a competitor: a new psychic has moved into town and worse still, she claims to see the future, which is something no one in the Fern family can do.

Things only get worse from there. A tourist is found murdered at a hotel. That’s bad enough. Murder has a way of scaring away tourists, which can mean economic death for a tourist town. But that’s not all. It turns out Clare’s womanizing older brother had sex with the victim the night she was killed and was the last person to see her alive, making him the prime suspect.

To further complicate the matter, it’s an election year for the position of town mayor so they want the investigation wrapped up as soon as possible. To that end, Clare is recruited by the current mayor’s son to unofficially help out, using her psychic ability. Of course, this also means she must work with the mayor’s son, who is her ex-boyfriend, and the new detective’s son, who hates all things psychic.

I really liked Clare as a protagonist. She’s no wallflower, waiting for the mysterious, hot new boy to come into town and sweep her off her feet. She doesn’t take crap from anyone, and she gets a lot of it because of her family’s particular line of work. When the detective’s son reveals that he hates psychics, Clare doesn’t let his hotness sway her. If he insults her, she calls him on it, especially as their investigation proceeds and she’s the one who finds all the leads thanks to her ability. I found it very refreshing.

While technically there are two love interests, I like that this isn’t the typical love triangle where Clare must choose between two different guys who represent two different worlds and where one is the obvious choice. Both guys have their flaws: Justin cheated on her and Gabriel doesn’t respect, or believe, her ability exists. Not only is the choice not obvious, but Clare must also contend with some serious hurdles no matter which one she chooses. Personally, I like another option for Clare but I’m not actually sure that’s ever going to happen.

On the other hand, while I liked Justin’s portrayal, I found Gabriel less interesting the more we learned about him. I don’t know if I’m just tired of angsty bad boys with past issues that make them treat girls badly. It doesn’t really justify it to me, especially since the reason for his disliking Clare’s psychic abilities rang false in the book. Maybe we just didn’t see enough of his character for the explanation to stick.

I also liked the portrayal of Clare’s relationship with her family. It felt like a genuine portrayal of a family, made up of quirky individuals with strong personalities. I liked that even though Clare constantly clashed with her mother, you could tell there was genuine love there. I loved that even though Clare adored Perry for protecting her growing up, she recognized that the way he treated girls was a major problem.

I was very impressed by how much was packed into such a short novel. Clarity was a very tight read, and I realized this was something I’d been missing in YA fiction lately. While the mystery is wrapped up neatly, there are some threads left open for future books (I’m assuming this is a series like everything else these days) and of course, the question of Justin versus Gabriel is left unresolved. (Though I’m still cheering for Option C.) B