REVIEW: Chance of a Lifetime by Portia Da Costa 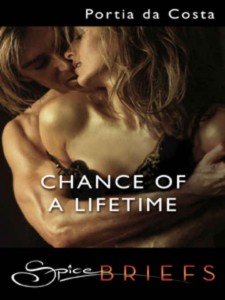 You are one of SuperLibrarian’s favorite authors and I’ve always resolved to give your books a try.   This Harlequin Spice Brief seemed like a good way for me to get an introduction to your writing.   In the context of a short, short story, I learned a couple of things. You can write very sexy work and everything said in British slang sounds less dirty than told in American slang.   As part of the constraints of the short, short story, however, the love story is less than convincing.

Rose is working a temporary job at Blaystock Manor, the home of a marquis.   She’s got a job waiting for her in a few weeks as a junior manager of a luxury resort in the Caribbean.   Until then she cleans, helps with renovations as Blaystock is turned into a hotel.   As part of her cleaning duties, she stumbled upon a small hidden room with an old VCR and a bunch of tapes.   Rose describes herself as being “irredeemably nosy” and thus just has to discover what are on those tapes.

The home movies show the marquis indulging in his sex fantasies which comprise mostly of him spanking women.   When Rose is found out, she’s endlessly embarassed but the marquis responds with quite a bit of aplomb:

“Hey, there’s no harm done,” the marquis says softly   “Now we both know each other’s dirty little secrets.”   He squeezes my shoulders.   “I get off spanking girls’ bottoms and having them wriggling on my lap.   And you get off watching videos of it and playing with yourself.”

The two engage in satisfying each others’ fantasies but Rose has a good job waiting for her and Christian, the Marquis, has a boatload of death and not much more to offer.

This has a traditional romance ending for those who are wondering but because of the brevity of the story, it’s really more an accounting of sexual antics than a journey of emotional fulfillment.   B-

This book can be purchased in ebook format only from the Sony Store.