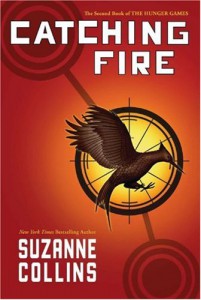 The Hunger Games was my favorite novel of 2008.   For me it had the perfect combination of a great heroine, fast-paced plotting, and gripping tension.   And considering the cliffhanger ending, I’ve been looking forward to Catching Fire since I finished last page of that book.

To refresh readers, and to bring people new to the series up to speed, The Hunger Games and Catching Fire are set in a dystopian future in the remains of what was once the United States.   At some point in time, an apocalypse occurred, which caused society as we know it to fall apart.   From the rubble arose Panem, which consisted of the Capitol and thirteen surrounding Districts that provided the various materials and goods to keep the nation running.   To be more accurate, the Capitol ruled over the thirteen surrounding Districts with an oppressive regime that eventually led to revolt.   Unfortunately for the Districts, the revolt was squashed and the thirteenth District was utterly destroyed.   To top it off, as punishment, the Capitol created the Hunger Games, an annual battle royale designed to remind the Districts who was in control.

Catching Fire picks up nearly immediately where The Hunger Games left off so those who haven’t read the book, please be aware that everything from here on out will be a little spoilery so tread carefully or stop reading.   In The Hunger Games, we were introduced to Katniss, the female Tribute from the twelfth District who is sent to the 74th Hunger Games in place of her younger sister, whose name was the one actually drawn in the reaping.   Despite the odds stacked against her, Katniss manages to not only win the Hunger Games but also keep both herself and her fellow Tribute, Peeta, alive.

When Catching Fire opens, Katniss and Peeta are fulfilling their duties as champions of the Hunger Games: touring, interviews, and public appearances.   They also now live in the winners’ village which every District has to house its champions and their families.   Unfortunately, District 12 isn’t known for putting out victors so the village is kind of empty.   In fact, the only other person to live there is Haymitch, their former mentor and the town drunk.   Kind of sad, if you ask me.

But Katniss finds that things haven’t become easier now that she’s won the Hunger Games.   In order to secure both her and Peeta’s survival, Katniss trapped the Capitol and used its own love of media control and public opinion against them.   In short, she humiliated them.   Can you imagine?   One lone girl from a backwater District known for sending loser Tributes outsmarting the all-powerful Capitol?   Yeah, they didn’t take it too well and intend to punish her.   This isn’t helped by the fact that during their tour, Katniss and Peeta have caught glimpses of civil unrest throughout the various Districts.

And so Katniss is worried.   Is the Capitol going to target her family?   She went to one Hunger Games to save her sister.   What would they do now?   Or are they going to target her best friend Gale, with whom a shared kiss has been witnessed by Capitol spies?   But what does happen is something she never predicted.

Sequel books are tricky, the second books in a trilogy in particular.   We’ve all seen sequels that don’t quite live up to their predecessor, especially when that first book is very memorable and stunning.   We’ve also seen how second books in trilogies function as bridges between the first book that introduces us to a new world and conflict and the final book that wraps it up with a bang.   While I do feel that Catching Fire is not as good as The Hunger Games and does indeed function as a bridge between it and the final book in the trilogy, I think it’s still an entertaining installment in its own right, albeit a flawed one.

I’m torn on the concept of the Quarter Quell.   On one hand, it fits within the context of the world and the Capitol’s methodology.   On the other hand, it’s also more or less a retread of the first book.   While the concept of the Hunger Games in and of itself is not a new one (see: Koushun Takami’s Battle Royale), it has a freshness to it in the context of this world and this series.   Returning to another Hunger Games when in truth, I was looking forward to seeing Katniss in a new arena — that of being a victor going up against the Capitol via secret rebellions and machinations, is kind of a letdown.

But on yet another hand, I did like seeing previous victors.   After all, my favorite new character, Finnick, came from this group.   In him, we saw a damning critique of our paparazzi’s tendency to oversexualize child stars and how they practically count down the seconds to when a child star turns 18.   In this respect and others involving the older victors, I did see more of the social commentary we got in The Hunger Games but was somewhat lacking here.   We have victors who are walking freakshows, who revel in their status and want nothing more than to return to the arena for more bloodshed.   We have victors who are well-past their prime.   And sadly, we have victors who have been broken by their experiences in the arena and who can only be called insane.

While I know this story is Katniss’s and the book itself is categorized as a young adult novel so the focus, of course, needs to be on the young adults, I do wish we’d gotten to spend more time with the other victors.   We only caught the barest glimpse of how the Hunger Games and the ensuing years as victors affected them, but except Finnick, the others’ individual stories didn’t really stand out.

I regret having to say this because I liked this aspect of Katniss’s character in the previous book and actually found it charming, but wow, is she dense or what?   I really wish we could have seen her getting more of a clue or at least being a little quicker to accept her role in the impending rebellion against the Capitol.   Yes, she’s more concerned with protecting her family and her own but I feel a bit disappointed that her time in the Hunger Games and on tour throughout the various Districts didn’t make her a bit more in tune to what was going on.

Along those lines, what was up with the ending?   I don’t really want to go into the details here but I was left feeling a little bewildered at the end of the book.   After I finished it, I immediately emailed Jane the following message: “WTF??????” To be honest, I feel as if the book came up against a hard deadline or a word count limit, which was why the ending was the way it was.   Because in contrast to the previous book in which Katniss was in control of the events culminating in the climax, it was nearly the opposite here.   Considering she’s the protagonist of the book, I can’t help but feel cheated.

Finally, to address that age-old debate of Team Gale versus Team Peeta, while nothing was explicitly confirmed, I do think it’s obvious which way the wind is blowing.   One team has far more evidence supporting it while the other not at all.   As for myself, I’ve abandoned the debate almost entirely because I discovered that Finnick is far more interesting a character to me than either Gale or Peeta and I’m more interested in seeing the (platonic) relationship between Katniss and him develop versus any romantic one she might with the two available options.   How’s that for fickle?

So while I don’t think Catching Fire is a match for, let alone exceeds, The Hunger Games, I do think it was a worthwhile, entertaining installment.   Given how the book ends — and yes, it is a cliffhanger once again although whether readers find it worse or better than that of The Hunger Games will vary — I still want to read the next book.   Because I’m hoping I’ll get that in-depth rebellion action I was hungering for but didn’t get in this one.   B