Warning: there are slight spoilers in this review for Iron Kissed, the previous book in the Mercy Thompson series. 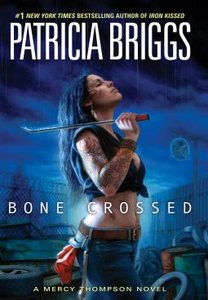 I read on JMC’s blog the other day that she was having a hard time crafting her thoughts about Bujold’s Sharing Knife: Horizon without coming accross as an incoherent fan girl. I’m a bit like that with your books. I hope I can provide some insight as to why I liked the book so as to help others who might be making a purchasing decision.

Bone Crossed is our 4th entry in the Mercy Thompson series and it is the first hardcover. Immediately, I think you get judged by readers by a different, tougher measuring stick. Because of the cost, readers forgo other purchases. So, is it worth it? Read on.

Mercedes Thompson is a walker. She shapeshifts into a coyote, is a fairly good singer, and has an immunity to magic. In the Tri-Cities area, that latter is a positive because the area is rife with other beings: werewolves, vampires, Elf kind, and faeries. A previous power struggle between the vampires led to Mercy making a powerful enemy in the form of vampire queen Marsilia. Everyone around Mercy thinks she should get the out of Tri-Cities until Marsilia calms down.

Mercy accepts an invitation from a college friend, Amber, to come to Spokane to investigate a haunting in her friend’s house. Despite Mercy’s doubts as to the veracity of her friend’s complaint, the truth is that there is not only a ghost in Amber’s house, but the ghost is threatening Amber’s son. Worse than the ghost is that there is a very old vampire who holds Spokane; so powerful that he holds it without any other vampires; so powerful that he can walk in sunlight.

Mercy must ultimately face a reckoning with Marsilia, the vampire of Spokane, and her own inner demons.

Bone Crossed begins almost immediately where Iron Kissed left off. Mercy Thompson, the narrator, is bruised, both in body and in spirit, by a rape. She must face up to survival which means coming to grips with her abuse, her love for Adam, her feelings regarding the Adam’s pack, and her own vulnerability.

The latter is probably the issue that bothers Mercy the most. While she acknowledges both outwardly and inwardly that she is not the strongest creature out there due to the fact that she shifts into a coyote shape and has not extraordinary magic or strength, her life long resistance to magic has possibly given her a false sense of security.

The problem for Mercy is that she is so used to surviving on her own and that the people in her life that have professed to love her: her mother; Bran, a father figure; Samuel, her first love – have only loved her under certain conditions. To become part of the Pack means to necessarily rely on others for support, both emotional and physical. To allow herself to be fully embraced by Adam makes her vulnerable again.

These internal emotional struggles are what draw me to the series, in particular, and to your writing, in general. Certainly the worldbuilding is interesting (I’ve certainly not read a machiavellian villain such as Marsilia in a long long time), but the depth of the characters and how each suspense encounter serves to either buttress or challenge Mercy’s foundation makes the Mercy Thompson series rise above the ordinary flotsam of urban fantasy books.

There was one point, though, in the book where I was jarred from the story. Early on, Mercy’s mother comes on stage. I didn’t recall her playing a big role in Mercy’s life in the past and didn’t recall Mercy having strong feelings for her mother. The way in which the character was portrayed seemed at odds with my memory. I kind of understood the purpose (I think it was to juxtapose Mercy’s relationship with the mother against Mercy’s relationship with Adam). It was the one jarring note in an otherwise smooth story.

I was happy with how the romance progressed. Mercy didn’t gain a bunch of new powers in order to save herself. I felt the world was consistent. I totally adore Samuel and hope that sometime there is a good match for him (Adam’s daughter maybe?). In all, it was worth the hardcover price. I bought my own copy from Sony today.   B+