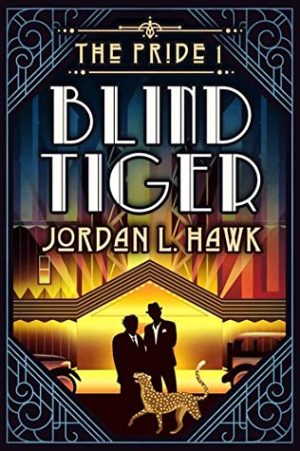 1924, Chicago. Prohibition is in full swing and gang bosses rule the city with might—and magic.

When Sam Cunningham flees his small-town life to try his luck in the big city of Chicago, he quickly finds himself in over his head in a world of gangs, glitz, and glamour. Fortunately, he has his cousin Eldon to teach him the trade of hex-making.

Everything changes the night Sam visits The Pride speakeasy and meets grumpy cheetah-shifter Alistair Gatti. After losing his first witch to the horrors of the World War, Alistair isn’t interested in any new entanglements, romantic or magical. Especially when said entanglement comes in the form of kind, innocent Sam.

When Eldon is brutally murdered, Sam becomes drawn into the dark underworld of the Chicago gangs. Sam must find the missing hex Eldon created for one of the crime bosses—before whoever killed Eldon comes back for him.

Together, Alistair and Sam begin the search for the mysterious hex, diving deep into the seedy side of Chicago’s underworld while dodging rival gangs. And as they come to rely on one another, Alistair realizes he’s falling for the one man he can’t afford to love.

I abandoned your other series (to me it got repetitive and should have ended long before it did), but I could not resist the shifters, especially since I remember and expected the book to be well written. I have to say, I am not sure how long I will stick with these books, but as a beginning of the series I really enjoyed it.

I have read and enjoyed several m/m romances set in the 1920s. Some were strictly historical, some historical fantasies, but the stories I read had been set in New York. This one is set in Chicago during prohibition and it was just such delightful fun to get lost in that time plus some magic added to the mix.

At the end of the book the author talks a little bit about some places and events mentioned in the book and you can see that he did a lot of research, which I always appreciate and this book is no exception. Even more so, since this one has clear fantastical elements – shifters (huge attraction for me, if done well, and in this book I think it was done very well) and magic. Now, I was kinda underwhelmed by the actual magic done but I do wonder if it was by design. The actual magic in this book, what we saw so far anyway, requires a lot of labor involved from the hexmen. Those are people who are able to design hexes that do different things and they sell/give them to other people who are able to work with hexes created by somebody else.

We also have witches and they bond with familiars and clearly this is a very important part of the magical world in this book. After I finished the book, I am still not sure whether witches are by definition able to create hexes, not just work with them, or those are two different things. I am also assuming that bond increases the strength of the witch and familiar as magical beings, but again I am not sure what it is that they actually can do. Hopefully the next books will show us that.

Yes, we do have the beginning of the romance between Alistair and Sam. Alistair is a grumpy but easy to like guy who was hurt in the past and lost his witch and Sam is your country innocent who was also hurt but in a different way. I liked them both lots even if they did not always behave in the smartest way possible, but their behavior made sense to me, I thought they had nice chemistry, and I am looking to reading more adventures about them.

In this book besides falling in love with each other the men are involved in investigating the murder of Sam’s cousin who showed Sam how to create his first hexes. I liked the suspense part of the plot, it was fun, but it was super easy for me to figure out who was the villain.