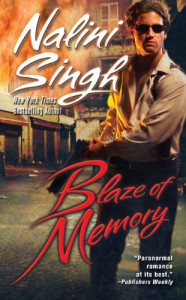 Blaze of Memory begins shortly after Devraj Santos finds an unknown woman unconscious on his doorstep. Dev is the director of the Shine Foundation, an organization that assists the Forgotten and protects their children from those who would exploit their psychic powers.

For those who haven’t read the earlier books in the Psy/Changeling series, the Forgotten are the descendants of Psy who dropped out of the net that psychically links the members of that race. Those Psy intermarried with humans, and their descendants manifest psychic gifts that are frequently different from those of the Psy. Some of the high ranking Psy view the Forgotten as a threat, which is why they persecute them.

As director of the Shine Foundation, it is Dev’s role to put the Forgotten first at all times, and to do whatever is necessary to keep them from harm. Dev has a cold and ruthless side to his personality partly because of that, and partly because of his psy ability, which remains shrouded in mystery for much of the book but is said to involve metal. But despite his hard edges, Dev feels protective of anyone who has been abused, and the woman he finds on his doorstep clearly qualifies.

When she wakes up, the mystery woman does not remember anything, even her own name. She is also malnourished, and her amnesia appears to have been brought about by psychic tampering. But she is quickly identified as Ekaterina Haas, a former colleague of Ashaya, the heroine of Hostage to Pleasure.

Katya, as she renames herself, begins to remember bits and pieces of the psychic violation that has altered her and left her able to experience emotions. The visions come to her in nightmares, and she is not always able to retain the memories. One such nightmare reveals to the reader, but not to Dev or to Katya, that Katya is a sleeper agent whose mission is to infiltrate Shine and gather information on the children of the Forgotten and their abilities. After she has done so or attempted to do so, she is to kill Dev.

But although neither of them knows the exact details of her mission, both Katya and Dev are keenly aware that she may be programmed to do something treacherous. Katya asks Dev to kill her before he allows that to happen, and Dev agrees. It is in fact something he has already planned on, but Katya’s courage earns his admiration and makes the prospect of killing her even more painful.

Once Katya is well enough to leave her hospital bed, Dev insists that she come with him to his house in Vermont, since he can’t trust her not to harm the children he has sworn to protect. Although Katya knows that she may in fact be a sleeper agent, she feels a compulsion to head north. Katya is angry at finding herself an effective hostage when Dev denies her the freedom to leave. She is also offended by the fact that Dev distrusts her even when she is being completely honest.

But despite the tension between them, Dev and Katya can’t completely resist their growing attraction to one another, especially when Katya’s nightmare memories leave her in need of Dev’s comfort. They are uncertain about what the future holds for either of them, and everyone who observes them feels that their love is doomed.

Katya and Dev’s storylines are interspersed with hundred-year old letters written by a mother with Psy powers and addressed to her young son, Matthew. The letters chronicle the lives of the writer’s family through the implementation of Silence, the protocol that keeps the Psy from experiencing emotions but also prevents them from committing horrific crimes.

Also interspersed are logs from a place called Sunshine Station, where something bad happened, and scenes that involve the members of the Psy Council, some of which are becoming aware of a dark patch forming in the PsyNet, something that may prove dangerous to all the Psy.

The first third of the book was slow to engage me for the following reasons. First and foremost, Katya and Dev’s story felt a bit repetitive early on since their budding relationship keeps running into the wall of Dev’s justifiable distrust. I felt that in that section of the book, they were essentially arguing in circles.

Secondly, much of the information in the letters to Matthew is about the inception and early implementation of Silence, and this terrain has already been covered in earlier books in the series, albeit not from this perspective. I realize that some readers won’t have read the earlier books leading up to Blaze of Memory, but for the reader who has, there isn’t much that is new in the epistolary storyline.

Third, like the main plot, the subplot about the Sunshine Station takes a while to kick into higher gear. And lastly, we don’t visit much with the changeling characters until later on in the book. I have grown attached to those characters, and before they appeared, I missed seeing them.

However, in the second half the book really gathers momentum. Since to go into the details would involve spoilers, I’ll just say that the Sunshine Station subplot eventually grabbed this reader by the throat, changeling characters from previous books play a significant role in the second half, and most importantly, Katya and Dev’s relationship turns around. Their arduous, star-crossed path to a happy ending makes their relationship richer and deeper, and that makes reading about it very satisfying.

The ending of the book is very emotional, and although I’ve begun to detect a pattern in the endings of your last three books, it still got to me viscerally. I think I may have cried harder toward the end of this book than I ever have while reading your books.

While this book isn’t up there with my favorites in the series, Caressed by Ice and Branded by Fire, I still felt it was worth reading and would not hesitate to recommend it to readers. B for this one.

This book can be purchased at Amazon or in ebook format from Sony on November 3.

→ Janine
Previous article: Open Thread for Authors (Author Promo) for November 2009
Next Post: Tuesday Midday Round Up: Winners and Lawsuits