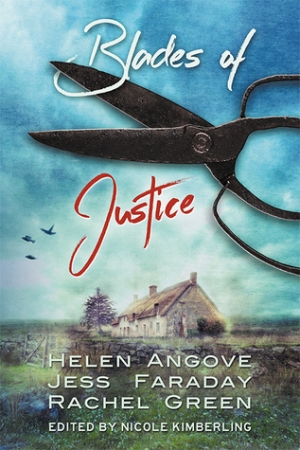 The scissors are blacksmith worked, crude and blackened. They’ve always hung there at the door of Treagrove. For three-hundred years they have played a part in murders and mysteries surrounding the women of the old house. Who says the tool of justice can’t be domestic?

1798-Despite the danger, the abandoned tin mine had always been the place where Esled and Rosie felt safest. But that was years ago. Esled’s beloved Rosie is dead, and the place where they used to meet now holds a deadly significance to someone else.

1888-If anyone deserved to be murdered, it was Davy Sowden. So, Miss Eliza Bell is not surprised that someone has finally killed him. But when she and her lover, Alice, become suspects in his murder, Eliza won’t just need to prove who did it, but also who didn’t.

1977-Melanie’s first teaching job brings her to a seemingly dull Cornish village. But after meeting Bernadette Merrick she’s inspired to dig into the village’s past. Unfortunately for both women someone is dangerously determined to keep old secrets buried.

If I can help it, I always buy books published by Blind Eye Books, because I know that even if I don’t completely love the story, I’m still getting a chance to read a quality work.  If a different publisher had released this book I probably would have passed on it – not because it was f/f ( I read f/f less frequently than m/m books but I do read it), but because from the blurb the story seemed to belong to the horror genre. I can tolerate horror elements in a book which does not focus on it, but I don’t enjoy those elements on their own and usually avoid stories characterized as horror. However, the stories here were described as mysteries and I was curious.

So, I dived in. I have to admit that grading this anthology was not easy. First and foremost, is it one story in three parts or are they three different stories that stand on their own? I would say both – the storyline centers around one house and some last names pop up in all three books, you can assume that those are the same people being reincarnated or they are just different members of the same family across the ages. The only thing that connects the stories besides the house are the blades, which are supposed to protect the women of the house and boy, do they!  Otherwise each story can stand on its own. I eventually decided to give separate grades to the three stories and then grade the book as a whole as well.

A Cut May Heal by Helen Angove

I also cannot stress strongly enough that these stories are NOT romances; they are historical mysteries (I guess the last one counts as a contemporary) with speculative elements and a touch of horror (less than I initially thought, thank goodness). There are also love stories  in each novella, and one  of those stories even has happy ending, but even that one was not a traditional romance, because it featured an established couple who had to deal with unraveling a mystery).

In the first story, which takes place as the blurb tells you in the year 1798, Esled learns that somebody has died and it turns out to be her beloved Rosie. The women did not stay in touch for fifteen or twenty years, after Rosie decided she wanted to get married and Esled did not want to continue meeting on the side, but Esled still loved her. When Esled comes to Rosie’s house to pay last respects she realizes that the death was suspicious and decides to investigate.

The story jumps between the present and Esled’s investigation, and the past, where we see Esled and Rosie together. I thought that the flashbacks worked really well and were heartbreaking, even though flashbacks usually do not work for me, so I consider this an accomplishment on the author’s part.  The investigation had to be simple because the first story is the shortest of the three, but I thought that it was well done.

There is even a possibility for a new love story for Elspeth at the end, but let me stress again, this is NOT romance, it felt more like – oh, let’s grab this minor character and make them a possible love interest to throw Romance readers a bone.

Grade: B and mostly because of the ending, because it felt tacked on.

The Kissing Gate by Jess Faraday.

This story takes place a hundred years later.  “The Village of Penbreigh lies in the Middle of Nowhere, Cornwall”.  This is how the story begins and the narrator’s name is Elizabeth Bell. She left London for the reasons connected to her work when she inherited Treagove (this is the same house with the scissors (blades), which featured prominently in the first story). She met Alice in the village and was almost instantly attracted. Elizabeth officially hired Alice as her housekeeper and unofficially they became lovers.

The story begins when Alice’s former lover, Morwenna Dowrick, comes to Alice and Elizabeth for help because Morwenna’s former husband, who had been presumed dead, came back to the village and wanted money from Morwenna. Let’s just say that while he was presumed dead nobody grieved for him.

Soon enough Morwenna’s former husband turns up dead again, only now he is completely dead with those blades stuck in him. Of course Elizabeth is initially considered a suspect because the blades were part of her house and of course she has to start investigating to clear suspicion from her and from other people she is fond of.

I thought this story was great, the best of the three actually, even if they all carry a similar theme. It was really suspenseful and I could not figure out the ending although by the end it became quite clear. I would be delighted to read more books with Elizabeth Bell as the investigator if the writer chooses to write them.

I was previously recommended (and bought) Jess Faraday’s books and now I am going to move those books to the top of my reading queue. Grade – B+

Greetings from Penbreigh by Rachel Green.

I am not sure how to review this story, to be honest. This novella was the longest of the three, and it occupies probably 43% of the total length of the book, but when I finished it all I could think about was – what in the name of all that is holy have I just read? My main gripe was with the ending, but it was even a bigger gripe than in the first story. It is not that the story went where I did not want it to go, I just could not understand how it got where it got, if that makes sense.

The year is 1977 and Melanie, a young black woman who has taken a teaching job in Penbreigh ends up being a  lodger in the same house we read about in the first two novellas. The man who owns it and his daughter Bernadette [and son Bryn?] live there, along with a lodger named Mari. Melanie becomes friends with Bernadette aka Bernie and then also befriends Bernie’s brother Bryn. While the brother and sister are mostly nice to her, their father is trying to get her in bed almost nonstop. Soon Melanie learns that there are a lot of dark secrets in this family’s recent past and she gets involved and tries to investigate and find out what actually took place. I cannot tell you about the secrets because they are very spoilerish.

The mysteries are revealed at the end, but I just did not get them at all. I am not sure how to explain what bothered me the most without spoilers, but let’s just say that I am perfectly aware that Blind Eye Books publishes speculative fiction. Barring the scissors, which deliver their special brand of justice as needed, these books did not seem like speculative fiction and this imprint of BEB is described as a publisher of mysteries.

The other fantastical element came out of left field to me and I am still trying to figure out whether it was a truthful revelation or not.

The romantic love in this story is completely one sided, so please beware.

Grade: C, because since the writing was fine I do not feel I can grade it lower than that.

Overall grade for the anthology: B.