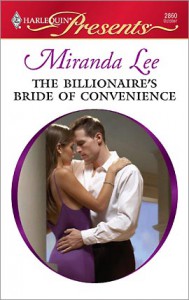 Billionaire’s Bride of Innocence showed tantalizing glimpses of Hugh Parkinson, heir to the Parkinson media fortune and billionaire in his own right. He’s got a soft and romantic heart and for that reason will not marry any poor girl.   He’s seen his father fall in and out of love what seems a million times and marry and divorce each of them.   He’s determined not to suffer the same or inflict this on any woman.   Yet, Hugh is in the grips of a terrible problem.   He has the hots for his PA.   Billionaire’s Bride of Convenience is Hugh’s story.

Ordinarily he would just seduce her and be done with it, but his PA is engaged to be married which means he can’t proposition her but going in to work is  excruciating  for him.   He contemplates her impending marriage and possible pregnancy and half hopes that she’ll stop working for him after she gets pregnant.   Only the idea of her glowing and with child adds a layer of further want.   I thought this was pretty hysterical.

Hugh was already praying for the day when she’d come into the office and announce that she was pregnant.

Though a pregnancy would not be the immediate end of his problems, of that he was sure. He had no doubt that Kathryn would work right up to the baby’s birth. She was that kind of girl.

The kind of girl, too, who would look even sexier pregnant. Her already impressive bosom would become even more lush, her wide, child-bearing hips accommodating a baby easily with only the most minimal bump.

He could see her now, positively glowing with health and hormones. And he could see himself wanting her all the more.

The prospect horrified him.

Could he endure at least another year of this?

Kathryn doesn’t reciprocate the feelings. She is ticked off that Hugh avoids the office and makes her do his work (not realizing, of course, that he avoids the office because he is too attracted to her). As she badgers him into spending more time in the office, his increased presence begins to aggravate her as well and she just doesn’t know why. Further, she is getting flack from her increasingly jealous fiance who doesn’t appreciate that she spends so much time with said handsome billionaire.

Harlequin Presents don’t involve a lot of character growth. Instead, the focus is on the courtship and the emotional connection formed between the main protagonists. The conflict is primarily internal. This is true in Hugh and Kathryn’s story. Hugh is deeply attracted to Kathryn but fears that this attraction will only be temporal. Based on his father’s philandering, temporary connections are all that Hugh feels he is capable of.

Kathryn needs to get married to gain ownership over a piece of property that is very meaningful for her. Her marriage to her boyfriend is one more of convenience than of love. She’s the product of a bad childhood and the concept of family is bound up in this house. When Kathryn’s fiance does something very bad and Kathryn breaks with him, Hugh gives in to his desire and propositions her.   More than that, he offers to marry her in exchange for sex.   (I guess it could be titled Blackmailed Into the Billionaire’s Bed).

Kathryn and Hugh start a raging affair under cover of their marriage of convenience.   Fortunately for Hugh, Kathryn is a perfect match for him, even in the bedroom.   (One thing Kathryn appreciated about her previous fiance was the good loving she had. Yes, a heroine who enjoyed sex with someone other than the hero).

The story is very sexy. I admit I was a bit surprised.   “"Don’t even try, babe,’ he murmured. "Can I at least call you that? Of course I can. There’s no one else to hear. You don’t mind my talking, do you? I like to talk during sex.’ Kathryn worries that she’s not emotionally equipped to handle an affair and Hugh is fairly sure he is emotionally able to ONLY handle an affair.

I loved how Kathryn stood up for herself, time and again. She’s, what Hugh refers to as, stroppy and sarcastic and frankly I like my heroines like that and clearly Hugh does too.

‘True. And it’s not as though you have anywhere to put it on your person-‘not in that bikini you’re almost wearing.’

"Maybe it just looks it on you.’

She rounded on him. "Are you saying that I’m fat?’

"Lord, but you’re touchy today,’ he said with an amused smile. "Of course you’re not fat. You must know that. But you are well-endowed, shall we say?’

"You told me that my breasts were beautiful.’

"Then shut up about my bikini being too small.’

"And don’t start mocking me.’

"I’d forgotten how prickly you could be.’

"That’s because you’ve probably gone back to dating your usual brand of sycophantic female.’

The dialogue is fun. The sex is hot (particularly for an HP) and the characters were enjoyable. B